2023 Chevrolet Corvette: Get on an Exotic Ride

The 70th anniversary edition of the iconic Corvette series looks like the car that dreams are made of.

The 2023 Chevrolet Corvette is all set to hit the roads in large numbers by early next year. This signature model happens to be the special 70th anniversary edition of the iconic Corvette series from the house of Chevrolet. Already, its gorgeously elegant design with a brush of supreme coolness, has mesmerized us.

Contrary to the popular belief, that a car can’t tick too many important boxes, the all-new Chevrolet Corvette 2023 comes out with flying colors. It’s true that more often than not, we find that several cars aimed at bringing various desired functionality on the table, eventually ends up becoming a jack of all trades, master of none. But the new Chevrolet Corvette appears quite unique, seemingly belonging to a rare breed among the sea of cars in the auto industry.

The first-look was revealed by Chevrolet long back and now, even the dream exotic sports car is up for grabs. Taking the rich legacy of the historic Corvette series into consideration, it can be firmly said that chances are fair that the latest entrant to this illustrious club, might well turn out to be a surprise package in 2023.

Interestingly, the year 2023 is going to be extremely significant as a host of top-notch cars have been announced by some of the power players in the global auto arena. In such a scenario, it would be exciting to watch how the dynamics change, when the much-awaited 2023 Chevrolet Corvette is pitted against the titans. 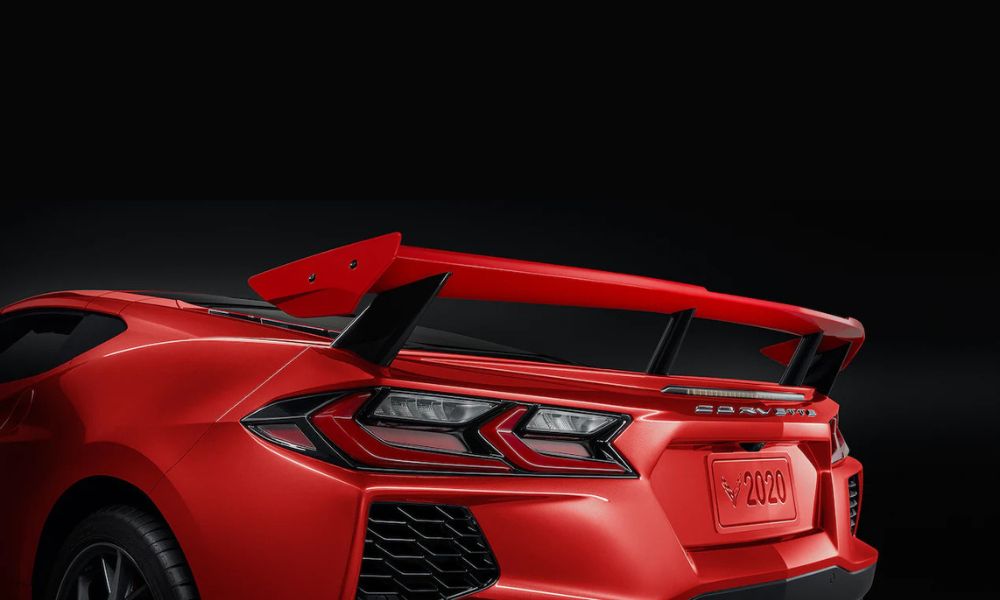 When we have a close look at the freshly minted Chevrolet Corvette 2023, we realize that it has pushed the boundaries to a great extent. [Image Credit: Chevrolet]

Chevrolet Corvette: The Story of Elegance, Exoticism and Unmatched Style

Chevrolet is certainly one of the leading automobile manufacturers in the world. It has an array of distinguished cars in its kitty. Yet, the Detroit-headquartered company which started off its glorious journey way back in 1911, brands the Corvette as ‘Second to none’. Chevrolet, colloquially referred to as Chevy and formally the Chevrolet Motor Division of General Motors Company, happens to be an American automobile division of the American manufacturer General Motors. Apart from cars, it also produces trucks, crossovers, SUVs and vans. Of late, it has started a separate section designated to the next big thing in the global auto scene – electric vehicles.

Therefore to be the signature car of a brand like Chevrolet, is no mean feat. It speaks volumes about the sheer class and the stamp of authority which Corvette has sealed over the years. Corvette made its dream debut long back in 1950 and since then, there has been no looking back for this flagship car. With the passage of time, it has only enhanced its features and bolstered its performance, winning millions of hearts and several accolades in the process.

Today, Corvette is a name for itself. It has embraced modern approach and blended it with the long-standing tradition and legacy to pull a rare amalgamation of class and style off, in terms of design. Audi’s famous R8, which is being prepared for its last dance with the Audi R8 GT model, can only come closer to Corvette, when it comes to luxury sports cars with exotic design.

In the last few decades, we have seen some absolute gems of cars in the form of the impeccable Corvettes, amounting to 1,767,241 in total so far as the production is concerned. We have also witnessed concept cars, modified racing cars and even space themed cars, in this much fancied Corvette lineup. Incidentally, the term ‘Corvette’ also refers to small warships and the ones offered by Chevrolet immediately strikes a chord with anyone who is ready to dive in for a hell of a journey along the road.

The expectations around the 2023 Chevrolet Corvette were sky-high. Going by the discussion so far, we can understand that stepping in the shoes of Corvette is indeed a Herculean task. The bar has been set quite high by its predecessors. And despite so much pressure mounting on it, the new Chevrolet Corvette has proved almost every critic wrong by managing to be powerful enough to carry the rich legacy of Corvettes forward.

It has outperformed the benchmark set by the previous editions, in many respects. When we have a close look at the freshly minted Chevrolet Corvette 2023, we realize that it has pushed the boundaries to a great extent. Hence, it comes as no surprise that the brand new luxury sports car is garnering heaps of praise across the auto world. It calls for a special attention, amidst high hopes that in all likelihood, it’s going to tear the sales chart apart. 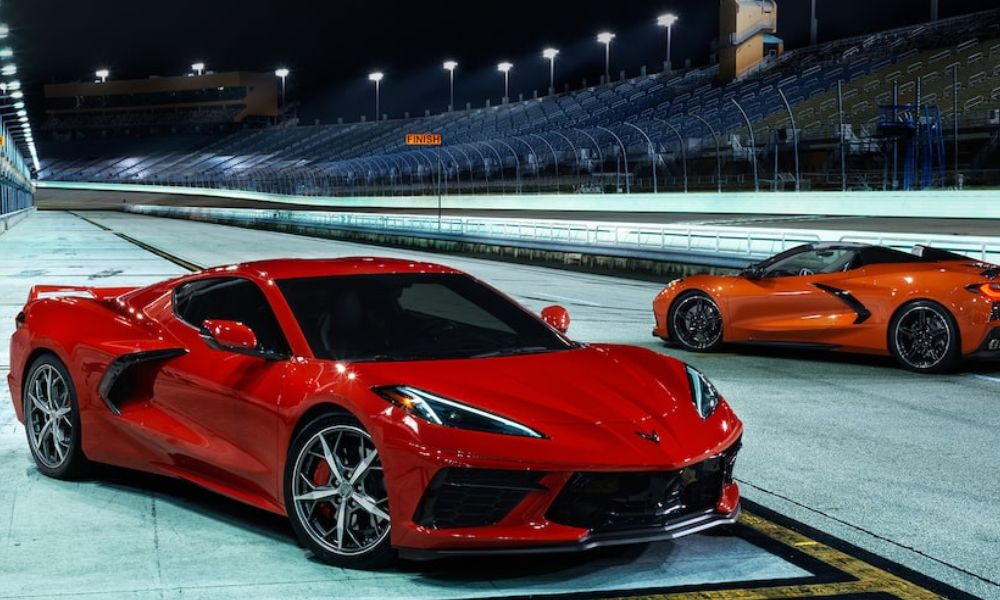 Above all, Chevrolet’s supercar-killer manages to pull something extraordinary off – exotic-level monstrous performance. [Image Credit: Chevrolet]

You will enjoy an exotic sports-car performance with the new Chevrolet Corvette at your side. Moreover, it is quite easy to live with on a regular basis and thanks to the high-end trim, you get a premium experience.

On the other hand, there is no provision for manual transmission and the car is devoid of high-tech driver-assists. Also, the squared-off steering wheel does not connect with the heart of every auto lover.

But above all, Chevrolet’s supercar-killer manages to pull something extraordinary off – exotic-level monstrous performance. Now let’s have a close look at its various salient features.

The 2023 Chevrolet Corvette and high-performance Z06 model are now available both as coupes (along with a manually removable roof panel) and as convertibles comprising a power-retractable hardtop. There are ample options too. The standard Corvette Stingray is up for grabs in three different trim levels. These are 1LT, 2LT and 3LT. Whereas the Z06 is available in 1LZ, 2LZ and 3LZ trim levels.

All Corvette models come with mid-mounted engines and are of rear-wheel-drive nature only. The standard Corvette Stingray model is bolstered by a 6.2-liter V8 engine (490 horsepower, 465 lb-ft of torque) and the Corvette Z06 is power packed with a high-revving 5.5-liter V8 engine (670 hp, 460 lb-ft). Most importantly, both the engines are accompanied with an able companion – an eight-speed dual-clutch automatic transmission.

However, the 70th Anniversary Special Edition package is being made available only on the 3LT and 3LZ trims. Interestingly, it houses quite a few exclusive features:

Shall I Buy the 2023 Chevrolet Corvette?

Apart from the absence of Manual transmission, which has been rated by the auto critics as a major miss, the Chevrolet Corvette 2023 possesses a few more pain points. Let’s shed light on them. Firstly, the rear sightlines are obstructed. Secondly, the cargo areas are small as compared to others. And most notably, it does away with the automatic emergency braking feature. The last one is a must these days, especially, taking note of the skyrocketing speed in which such sports cars set the roads ablaze at times.

We hope Chevrolet will take a note of all these pain points and might come up with a revised model after the next upgrade with a host of new modifications. The competition in the luxury sports car domain is quite stiff and the battle will surely become absolutely down to the wire as a wide range of flagship sports cars are lined up to hit the stores in early-2023.


But what makes the 2023 Chevrolet Corvette stand class apart from others. Certainly, its over the top specifications and the out of the box functionality it brings on the table. And it has something in its bag, which is beyond valuation, beyond forgery or imitation – the unmatched pride, unparalleled legacy and rich history of the illustrious Corvette series. Moreover, it inherits the enviable trust, something which has built bit by bit over a span of seven decades. This itself speaks volumes about its USP.

Another distinction happens to be a top-notch Fuel Economy with an EPA-estimated 19 mpg (16 city/24 highway). It’s packed with Chevrolet’s latest infotainment system – crisp and modern graphics along with the optional 14-speaker Bose audio system, which successfully produces supreme-quality sound with no dearth of power. In addition to all these, the new Chevrolet Corvette is perfectly in sync with wireless Android Auto and Apple CarPlay connectivity, with smartphone integration systems working superbly well during a number of reported tests.

In a nutshell, this next-gen luxury sports car is undoubtedly a value-for-money option as it more than justifies its price-tag, which starts from $65,895 and ranges up to $83,450. If you are planning to buy a new luxury sports car that would be able to grab the eyeballs as well as deliver a seamless, world-class performance with super comfort, then don’t look anywhere beyond it. Go rush to your nearest Chevrolet showroom and book yours. We would recommend you to book a test drive before getting hold of the keys on a permanent basis.

We have quite an exciting lineup for 2023, so far as the global auto industry is concerned. From the charismatic 2023 Nissan Z and the 2023 Lexus LS 500, which comes with intuitive technology and refined luxury, to the impeccably cool and elegant Toyota Prius 2023 – the new year has it all.

Hence, it will be really interesting to see how it goes on when the 2023 Chevrolet Corvette, which has made it to the prestigious ’10 Best’ list by the famed Car And Driver magazine, locks horns with these frontrunners of the new world auto order. Don’t worry, as always we will be keeping a close tab on this and will keep you posted with exclusive updates only at Technowize. Meanwhile, you can check the 2023 BMW M3 CS leaks as you await the eighth generation 2023 Chevrolet Corvette.

What is the price of the 2023 Chevrolet Corvette?

The price-tag of this next-gen luxury sports car, starts from $65,895 and ranges up to $83,450. It is undoubtedly a value-for-money option as it more than justifies its price