Move over, vogue challenge. We’re here to spill the tea on Chinese app TikTok, its never-ending controversies and countless fallacies.

TikTok, the popular short-format video app, likes to dip one foot in controversies and the other, shaking off its long-standing history of major security flaws. In just four years since it was launched in markets outside of China, TikTok has become the most downloaded Chinese app in the United States. The Chinese-owned platform has surpassed social media bigwigs like Facebook, YouTube and Instagram to become the world’s most downloaded iOS app.

Though TikTok may be gold dust for fame-hungry Internet users and power-hungry Wall Streeters, it has never been far from controversy and criticism. TikTok’s top perch on the iOS App Store and Google Play Store has come at the cost of public flak and legal headaches.

From clashing with human rights groups over glorifying acid attacks in India to criticisms over censorship of posts by ugly and poor users, here are 7 biggest controversies to hit TikTok over the years. 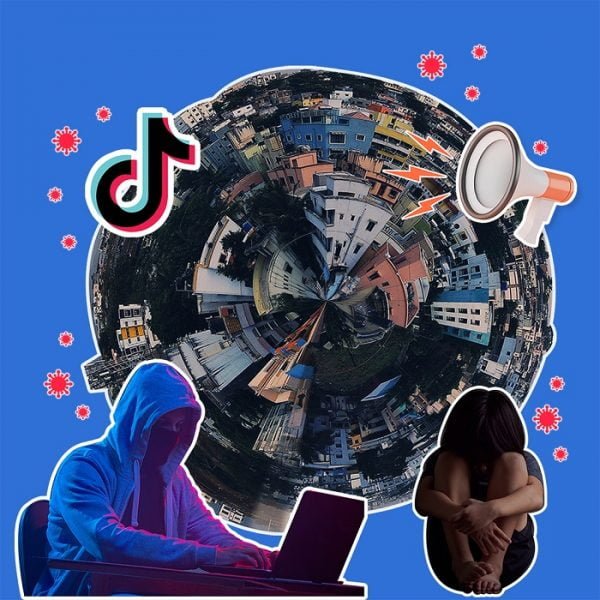 Despite all success, the TikTok app has endured several major controversies.

In the summer of 2019, a 19-year-old living in Curitiba, the capital of the state of Paraná in southern Brazil, killed himself live on TikTok. The Brazilian teen’s livestream video remained up on TikTok for more than an hour and a half, and received nearly 500 comments and 15 complaints before it was taken down from the platform.

Instead of alerting authorities immediately, the Brazilian office of ByteDance, TikTok’s parent company, was busy monitoring TikTok and other social media platforms to see if the story surfaced publicly.

According to internal documents provided to The Intercept by a former ByteDance employee, the day that Brazilian teenager livestreamed suicide, the ByteDance office took action – not to alert the authorities or the young man’s family, but to prevent a PR fallout.

2. Censorship of Ugly and Poor Users

A few hundred words wouldn’t do justice to TikTok’s censorship activities. But we have to begin somewhere… According to internal documents obtained by The Intercept, TikTok app moderators were instructed to suppress posts created by users deemed too ugly, poor, or disabled for the platform. One document instructs moderators to scan videos for cracked walls and disreputable decorations in users’ own homes and punish those poor users by narrowing their audiences.

TikTok moderators were also instructed to suppress uploads featuring users with deformities from the “For You” page. The “For You” page acts as a homepage where people can browse TikTok’s most popular and trending videos. Uploads from users with traits such as “ugly facial looks,” obvious beer belly,” “eye disorders,” “abnormal body shape,” “too many wrinkles,” and many other “low-quality videos” were instructed to be kept out of the For You page.

According to TikTok spokesperson Josh Gartner, the questionable policy of suppressing videos featuring unattractive, poor, or disabled users “represented an early blunt attempt at preventing bullying, but are no longer in place, and were already out of use when The Intercept obtained them.”

The Intercept noted how none of the documents obtained contain any mention of anti-bullying behind TikTok app’s censorship tactics. In contrast, the need to retain new users and grow the app was the rationale behind TikTok’s censorship practices.

Death due to a viral TikTok challenge is nothing new. According to TikTok Death Tracker on the website TikTokDeath, idiotic and dangerous challenges account for 27% of death. Racism, dance, and drowning has claimed the least lives at 1.5 percent.

Warnings against participating in TikTok’s challenges have, unsurprisingly, not made much of a difference. Young people, often trying to gain clout, continue to post attempts at these challenges. Oftentimes, this leads to them becoming the challenge’s next victim. 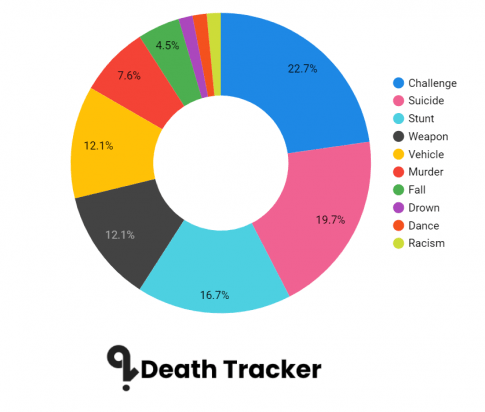 According to TikTok Death Tracker on the website TikTokDeath, idiotic and dangerous challenges account for 27% of death.

The problematic platform’s most recent challenge called “Mugshot challenge” sees people doing their makeup to look as if they’ve been assaulted, with fake blood and bruises a common feature, as well as tear-stains and messy hair. The tone-deaf trend triggered and upset victims of domestic abuse who blamed TikTok for allowing fame-hungry users to glamorize violence for clout. “Think about the lives ruined by domestic violence,” wrote one user. “As someone who experienced domestic abuse and who still deals with trauma from it, I find the whole trend disgusting.”

The challenge also sparked backlash from people who have been arrested and had mugshots taken in the past. “This is not at all funny,” wrote one user. “That was a low point in my life.”

The TikTok app discourages performing dangerous stunts or challenges. However, it hasn’t done much to prevent the further spread of many dangerous – even deadly – viral challenges. It’s no surprise that the massively popular video-sharing platform would pick success over safety of young people.

Children as young as seven are being targeted by pedophiles on the TikTok app. While this has been a concurrent problem even with Snapchat and Instagram, its TikTok’s blatant disregard of users’ cyber safety that makes it a distressing problem.

In February a British charity released a report warning parents that predators were using the platform to groom, watch, or otherwise engage in sexually explicit conversations with potential victims as young as 8 years old. That same month a 35-month-old Los Angeles man was arrested on suspicion of committing lewd acts on children. Investigators accused him of initiating “sexual and vulgar” conversations with at least 12 girls – some as young as 9 years old – late last year.

In April, India’s High Court ordered Google and Apple to pull the short video-sharing app from their respective app stores in India over concerns that it was propagating pornographic content and exposing children to predators. It was briefly banned for similar reasons in Indonesia last year.

The Chinese app has received a lot of flak for not having the same safety features as its rivals. What’s worse, the platform does not routinely remove accounts that have been flagged as potentially those of a predator. It’s beefed up “restricted mode” scans and blocks users younger than 13 from using the app – but there are plenty of young tween users.

Parents can set their child’s profile to private but that’s futile. Even with a private account, profile information such as username, bio, and profile photo will be visible to all users.

We’ve established earlier how TikTok isn’t just cute puppy clips and viral (often idiotic) dance challenges. What you search for, like and comment on shows you more of it on the explore page also known as “For You” homepage on TikTok.

A quick search for “#TradeForTrade” would lead to you to a hundred suggestions of accounts associated with nude trading and images on TikTok.

“If you have a 🍆 💦 trade me on snapchat dm me,” the bio of one profile reads.

It’s not possible to tell if these accounts are run by underage users or adults. It could also be someone masquerading as a teen in order to solicit images from underage TikTok users.

In the app’s relatively short existence, it has received criticism for its privacy and security. A viral April 6 Facebook post claimed a manager at Verizon said to “get rid of Tic Toc site. They are a Chinese site that has No Security, Hackers and Child Traffickers use it Extensively.”

Earlier this year, Check Point research revealed details of security vulnerabilities in a blog post. The report stated that hackers could send TikTok users malicious links as messages, which subsequently allowed them to take control of the account, once the message was opened.

Recently, the platform received the biggest fine in US history for gathering data on children and selling it. Although the $8 million penalty would have been a drop in the ocean for a company worth over $110 million.

India, where the short-format video platform is extremely popular, officially asked ByteDance to take down coronavirus misinformation, such as posts that encourage young people to ignore Indian lawmakers.

Amid the coronavirus outbreak, the app was flooded with posts from popular TikTok users asking their followers to flout social distancing rules. An Indian TikTok user with over 75,000 followers posted a video of himself refusing to wear a face mask, suggesting that faith in God was more important than a piece of cloth.

If that weren’t enough, the platform is also riddled with videos glorifying rape, animal abuse, and violence against women and children. Last month TikTok’s rating took a nose-dive when Indian users flocked to the Google Play Store to give it low ratings. #BanTikTok is popular and trending hashtag on Twitter where Indian users can be found calling the app “a menace to the society,” “a safe-haven for predators,” and “a spyware tool.”

There you have it. A run down of some of the biggest TikTok controversies and foul-ups that have brought the Chinese app under fire in recent years. If you’re done with the controversial Chinese app due to its continual security lapses, here’s a list of TikTok alternatives you might want to take a look at.