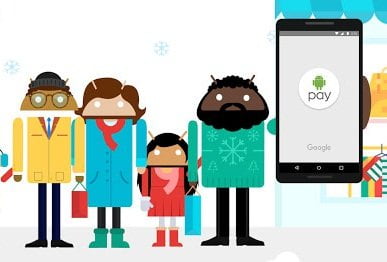 Finally, it’s here. You will be able to use Android Pay in UK. The company has started rolling out Google Wallet’s re-vamped version in the United Kingdom ahead of the Google IO 2016. The service was originally unveiled in 2011 and utilized NFC mode to transfer payment data from an Android-based smartphone to a terminal i.e. contactless.

The parent company of Google decided to update and revamp the service in September 2015 after the launch of Apple Pay in 2014. The re-branding was done with a robust business model with the help of a few major bank alliances.

Android Pay in UK will be supported by Mastercard debit, VISA, or a variety of credit cards supported by banks that include Nationwide Building Society, Bank of Scotland, MBNA, First Direct, M&S Bank, Halifax, Lloyds Bank, and HSBC.

At last, Google has fulfilled its promise regarding the arrival of Android Pay in UK. Barclays and Santander seem invisible from the launch. Barclays recently announced its alternative to Android Pay. The popular bank announced that its customers in the United Kingdom with a bank-issued credit or debit card will be able to use their phone to make contactless payments. The Android Pay Alternative in the UK won’t be supporting Google’s Android Pay at all. The payment service offered by the famous bank will be available from next month.

The Android-based smartphone users will be able to use Android Pay in places where contactless payment options are available. In a similar manner to that of Apple, users will be able to use Google’s payment app to travel on transport network in London. This also involves the Tube. The payments will be strictly limited to the current limit of £30 for contactless payments. Google will also support Android apps such as Yplan and Deliveroo to offer in-app purchases.

Merely a few hours before Google IO 2016, Android Pay Day is being launched by the company. This will consist of various offers from leading retailers like Starbucks.

Google is trying to dominate the global market with Android Pay. After its launch in America followed by the United Kingdom, Google is planning to invade one of the most high-end commercial hub in Asia, Singapore. Google will be soon launching Android Pay in Asian markets with Singapore being its first market. It will be as usual available on all Android-powered devices with version KitKat 4.4 and above along with having the device enabled with NFC.

Also, today is Google’s much anticipated IO conference, so we’re more likely to hear about additional countries that are going to host Android Pay and more features about the service.