Airbus is Having their Hands on Cutting-edge Autonomous Flying Vehicle

Airbus announced to unveil the concept design of its autonomous flying vehicle project; created in partnership with Italdesign at this year’s Geneva Motor Show. Not so long ago, the company was talking about the development of self-driving flying vehicles and now the project seems to be heading towards the implementation. Airbus tends to solve the growing problem of urban traffic and so designed a modular vehicle which can operate both on the ground and in air.

The self-driving artificial intelligence based flying Pop Up 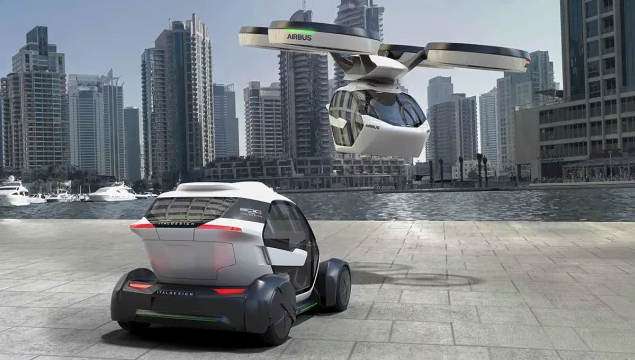 The high-end artificial in intelligence based vehicle has a way practical design. The autonomous flying vehicle is focused on networking with others. It is likely to adopt the modern system of call-on-demand. The passengers hailing a ride will possess an app on their mobile device which they can use to call the self-driving flying vehicle. The vehicle provides good convenience to the passengers letting customers specify their method of transportation; on air or by the roads.

Airbus and Italdesign call their vehicle the ‘Pop Up System’, which uses the artificial intelligence technology. It allows the user to select route options and mode of transportation. It takes care of the user requirements given to it in the feed. Moreover, the capsule vehicle may be paired with the hyperloop systems after the tech becomes widespread.

The Pop Up is a cutting edge project that uses the base of Virtual Reality. It possesses an interface that creates a virtual environment and interacts with the user in the virtual world on-the-go.

The Project will be live within two years, according to Airbus. The autonomous flying vehicle is yet a concept except for its 8.5-foot long carbon-fibre passenger pod which is ready to a complete scale.

Airbus has potential answer to the traffic problem

Airbus has a potential answer to the increasing traffic problem with the increasing urbanization. For instance, The Brazilian Metropolis Sao Paulo set a new record in 2014 when around the city the rush hour traffic stretched out for 344 kilometers. This huge congestion cost the Brazilian economy at least 31 billion USD a year. Furthermore, there is another study that states that Londoners suffer the loss equivalent to 35 working days per year idling in the traffic rush. The situation is very worse in many urban cities such as Mumbai, Manila, Tokyo etc.

The technology Airbus is having their hands on was thought to be impossible once. It is a good everyday option to solve the traffic issues in the urban cities. It is supercool to imagine about the wonder this Pop Up can bring to us.