Airmail for iOS is openly customizable 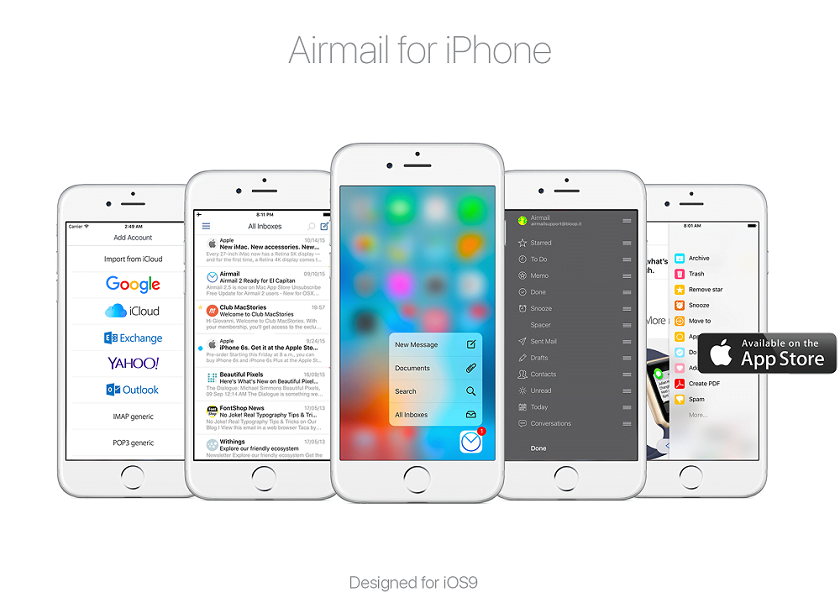 There are plenty of e-mail apps that have one or the other innovative feature. But now we have an e-mail app- Airmail for iOS that provides us with whatever we want.

Starting from Sparrow to Mailbox and Inbox, each had something to offer that other apps didn’t. Sparrow had utter simplicity, Mailbox had snoozes, and Inbox comes with its bundles and intelligent cards. With all those unique features, we may fail to notice today’s launch of Airmail for iOS that seems like just another app.

Airmail does not introduce any unique feature of its own but it will let you do whatever you want when it comes to e-mails. It has some overwhelming features like snoozes, filters, integrating third-party apps, setting per inbox notification sounds to bouncing e-mails or changing Gmail folder mapping. This app provides more features compared to any other app and is shamelessly customizable.

It is really difficult to decide the features that are required in an app and the features that can be avoided. While most developers would be embarrassed to deliver all the extensive features, developers of this app chose to provide it all. They decide the design of the app, its look and feel, and then include all the options. Usually, such a variety of features may make the app more complex and difficult to use, but this app manages to be user-friendly with its customization. Customizing an app exactly how you like it, is really fun.

You can change most of the things in this app according to your preferences. You can customize actions to be taken when you swipe an e-mail, enable or disable actions like sharing and starring, or rearrange core menus. You can also change the colors if you do not like its unified inbox look.

As stated by Leonardo Chiantini, the co-developer of this app, people have different needs and adopt varied approach with e-mails. He says that “These extensive options comes by design. But, we know that everybody would not like this.”

Airmail for iOS will cost you $4.99, which will work on Apple Watch and iPhone. Chiantini also announced that app’s iPad version will be launched later as they do not wish to make it just a larger version of iPhone app. This app is huge and dense with plenty of options to choose from. If your current app is rigid and won’t let you do things as you like, this is the app for you.