It’s a tough life being an internet police, online moderator that is. Spending cold, dewy mornings to insomniac nights in rotas of hourly shifts staring at the computer that soothingly chimes as more and more comments appear in the thread. Being genned up on private conversations, tiffs, suicide-related posts, spamming, harassment, hate speech, commercial solicitations, threats, and even the dark, inane side of online networking. What happens on the dark side is something you’ll never see, but occasionally catch a rare glimpse of it when people behind the computer turn into monsters and resort to schadenfreude subjects such as crude/overt sexual remarks, porn and nudity.

In the past few years, however, with the current proliferation of social media and online networking intercepting comments on internet forums and messageboards have promptly evolved. There are companies out there, such as eModeration, Tempero, Icucmoderation that offer threads sanitizing services to internet companies who don’t want to a reputational damage. But then again, these companies hire people for anonymous intervention in weeding out sadder, revolting subjects such as obscenities and graphic nudity.

Algorithmia, a marketplace for Algorithms have developed a nudity detection tool that can help identify and weed out nudity and color photographs. Isitnude.com, launched this week by the Algorithmia, when fed with an image, tells you if that anyone in that image is wearing little to no clothing. An easy way to detect online nudity? There’s your shining little glimmer of hope, moderators. 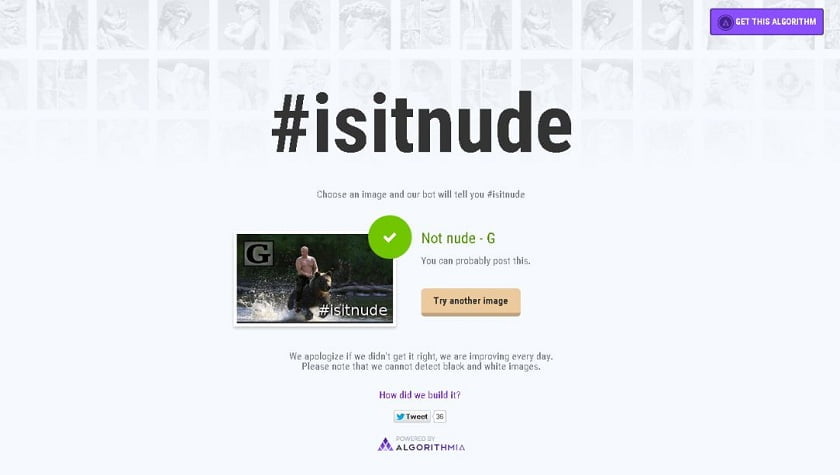 The algorithm is built by combining skin color detection and image detection algorithms developed by Algorithmia to identify nudity. It uses skin color distribution model and scans the image to join patches of detected skin. If the Algorithm detects large portions of image as skin, it marks the image as having nudity. In addition, face detection algorithm is used to find multiple people to help prevent false positives, as well as to figure out the skin tone ranges it needs to look for in an image.

Images uploaded onto the site as not archived, so it has to resort of others channels in order to understanding what’s working and what’s not.

The system, as of now isn’t ironclad, and Algorithmia CTO Kenny Daniel has admitted to the same, however, developers are still tweaking code that can help identify body parts. Since the algorithm relies on skin tones to identify nudity, it’s pretty much powerless against black and white pictures, and cannot get by without being flagged. One more catch: since the algorithm is based purely on skin, innocent beach pics might get flagged too.

These kind of issues will eventually be spelled out. Daniel says Algorithmia is continually improvising on it, and trying to build a more sophisticated nudity-detection algorithm. It would be a tremendous time-save for online moderation companies trying to clear out offensive images from internet forums and comments sections. For social media networks as giant as Twitter, Instagram and Facebook, which employ a legion of moderators, it could be a real time-saver.