Wing’s successful trials have by far established a landmark towards efforts in making drone deliveries ubiquitous, though the service still has a long way to get there.

On-demand drone delivery service is inarguably a key lifeline in providing the fastest deliveries in the future. And while a good number of consumers are daring for the service’s availability, there are still challenges associated with its use in our society. Through thousands of trials in Australia, Alphabet’s Wing is dealing with some factors that impeding quick deployment of drones for package delivery.

Consumers growing appetite for faster and faster delivery is the key motivation behind wild efforts by various firms to lead a service that will deliver orders within the minimum time possible. Imagine being so sure that your pizza orders will arrive in just 15 minutes. That’s where technology is eventually taking us to, and drone delivery is the biggest shot, at least for now.

Google’s parent company Alphabet announced on August 28, 2014, that it was working on flying vehicles that could deliver products to consumers, at its blue-sky research lab, X. Though there are claims that the project (Wing) started secretly two years earlier, full-swing tests began in Australia the year it was announced.

Through project Wing, Alphabet designed flying vehicles (drones) that could take off vertically and fly around rotating horizontally. In other words, Wing’s drones are able to take off and land without a runway and hover in place, which enables them to winch packages down to the ground. Most importantly, the drones – unmanned aerial systems (UAV) require comparatively little power to travel for long distances at high speeds.

Since the idea of airlifting cargos came, drone-based delivery has been the most viable option. Traditional quadcopters are not suitable for such service in rural areas that are far from cities and towns. However, those areas would benefit more from UAV-based delivery service.

Project Wing made remarkable progress the same year it was announced by Google’s parent company, having built a proof-of-concept vehicle and software already. The very first testing was carried out in 2014, in Australia. And first aid kit, dog treats and candy bars were the packages delivered to a cattle ranch in Queensland. During this test, another innovation from Alphabet’s moonshot factory also made a debut: winching packages to the ground on a line that’s nearly 50m high, instead of landing the drone. That’s a remarkable breakthrough considering that users may compromise the drone’s safety if they touch down for every service. But that hasn’t solved all the challenges Google would face in deploying drone delivery services. 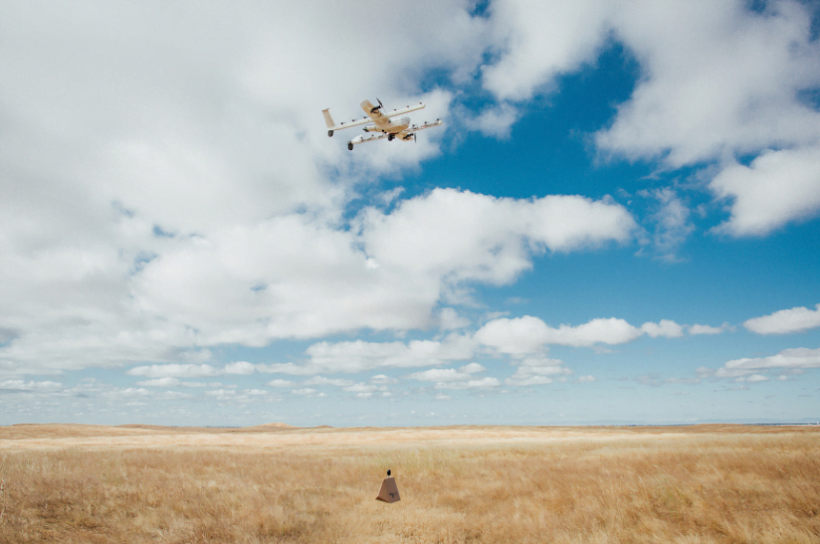 Alphabet’s Wing initiated more radical testing to understand potential challenges and how the drone could operate. This time, the team collaborated with two Australian merchants: Guzman y Gomez, a Mexican food chain and Chemist Warehouse, a chain of pharmacies. Testers had to use Project Wing app on their smartphones to order items from the partnered stores. And they’ll be delivered using drones. Here are some of the studies Alphabet’s Wing considered during the test.

The best way to deliver each item ordered by consumers became necessary after Wing encountered obstacles like power lines, fences, sheds, and layout of trees in subsequent tests. The team’s first delivery in Queensland was not to a specific address or location; it was in an open field. Hence, there became a need to sort the mentioned factors to ascertain how best packages can be delivered.

Alphabet claims that its drones can deliver packages almost anywhere – public parks, backyards, farmlands, etc. But training the drones to reliably identify locations that are safe and convenient for deliveries became a new task for the team. The systems must be intelligent enough to deal with changing conditions at the delivery locations or planned route such as cars parked in an unexpected spot. Wing continued building the algorithm to become wiser as more tests were conducted.

To operate an efficient drone delivery service, the drones must be willing to pick up packages from anyone, almost anywhere. This requires a packaging technology or design that must be easy and intuitive to use so that anyone can easily load and receive packages without special knowledge or experience.

Project Wing’s team was open to learning from its first partners, Chemist Warehouse and Guzman y Gomez, on how their staff could easily load packages onto the drones for delivery. Also, the parties had to decide on the time limit needed to prepare and package orders, so that the drones would get to the suppliers in time.

Of course, user’s feedback will be crucial in Alphabet’s willingness to spending more fortune designing drones. Project Wing focused on the individuals that require at least 40-minute drive to buy almost anything. The result was positive. Almost all users welcomed the technology and outlined how the service could alleviate the inconvenience of having to travel for a carton of milk. Some of them that run small businesses at home expressed interest in using the service for quick deliveries to their customers. They also recommended areas the service could be more useful to include delivery of mechanical parts to emergency service workers or items to inaccessible areas due to fire or flood.

In July 2018, Project Wing was spun out of moonshot factory, X to become a division in Alphabet. As of December 2018, Wing reported having completed thousands of flight in efforts to get the drone delivery technology working for everyday use, with 55,000 journeys made in Australia. Only a few tests were carried out in the United States. That include deliveries in an open field at Virginia Tech University – the very first to members of the public in 2016 and it’s first long-distance, residential drone delivery in August 2018 – a record benchmark in the UAS industry.

Wing has conducted test flights that require flying above the crowd, nighttime, and beyond visual line-of-sight (BVLOS) to collect very useful data regarding unmanned aerial activities in the United State. This has been made possible due to ongoing substantial transition supervising some selected drone companies to test their operations thoroughly in many US cities. 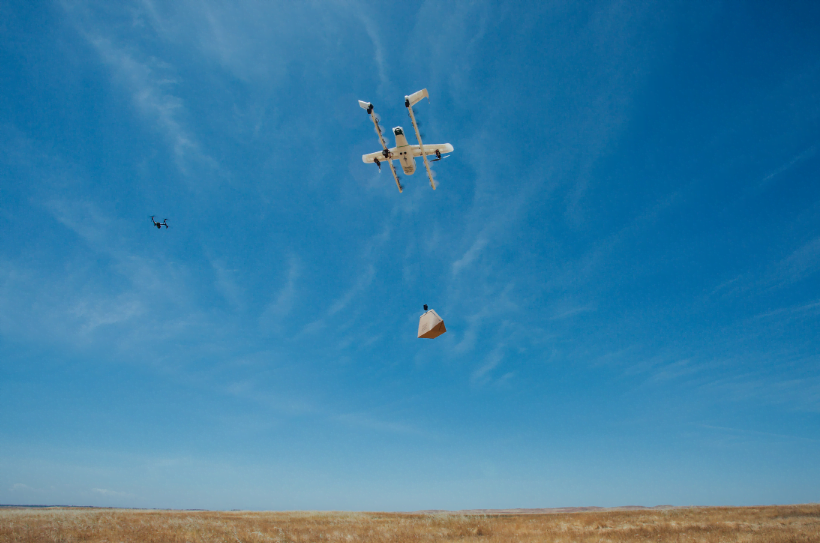 Alphabet’s Wing announced early December 2018 that the division will begin testing its drone delivery service in Helsinki, Finland – its first European location early 2019. According to Wing, its drone will deliver orders weighing up to 3.3 pounds (1.5kg) within minutes an order is placed. Similarly, customers will place orders using Wing’s Smartphone app.

Wing’s drone is a 12-rotor, vertical takeoff and landing (VTOL) aircraft that’s a little smaller than the military’s Osprey drone. The design is more like a combination of a mini helicopter and standard fixed-wing airplane that can travel long distances. The drone can hit a top speed of 85mph. It lowers payloads on a tether to avoid colliding with objects below or people.

The future of drone deliveries

Drone delivery service promises a more environmentally friendly, cheaper, faster and efficient future in delivery business. However, government approvals and skepticism stand as the foremost challenges, though more nations are finally getting on board.

There is no question about how lucrative the industry will soon become, considering the juicy promises and the fact that consumers are gravely obsessed with speedy transactions. The service will be effectively used by individuals in the remote areas and directly rival traditional delivery services attempting to cut down time of delivery, such as UberEats and Shipt recently acquired by Target for $550million. Drone delivery will also create GIG jobs such as getting paid to charge drones.

There would be a war among drone delivery service providing companies on a partnership with retailers. Wing has already finalized a partnership deal with Chipotle to deliver its products but has so far failed to secure a deal with Starbucks.

Amazon’s Prime Air, Startup Matternet, and DelivAir are some of the companies that have made significant effort to provide drone delivery service. They would be the first rivals to battle with Alphabet’s Wing. Despite how gloomy drone delivery service seems, it will still face other serious challenges.

The issue of privacy would fuel wide skepticism and discourage some consumers from using the service. Most individuals would consider drones flying over their roofs as undermining the security in their homes. How about hacked packages? There are chances that packages would be hijacked by drone hackers – DJI is already battling with vulnerabilities, though no major attack has been reported. Drone delivery service will force cybercriminals into the delivery industry, raising more questions about the service and encouraging some users to insist on the traditional delivery system. In addition, not all packages can currently be delivered by drones.

Wing’s successful trials have by far established a landmark towards efforts in making drone deliveries ubiquitous, though the service still has a long way to get there. There will be a need to create thorough unmanned traffic management (UTM) systems and extensively test drone deliveries to safely secure potential drones that would be whirring across national airspace simultaneously. At the moment, we must admit the giant milestone achieved in the industry, mostly by Alphabet’s Wing.