Amazon Echo Spot Review: A neat device, but not worth the hefty price tag

Amazon Echo is the first Alexa-enabled device with a display. But most users are expecting a bigger screen in later productions according to some Echo Spot reviews. At which cost? The device is already $129.99!

Over the years, people have grown habits of relying on their Smartphone for a whole lot of functions. And the implication of these useful functions most times encourages our addictions to social media, emails, and other similar services which studies have proclaimed unhealthy lifestyle. This addiction is eminent since our alarm devices are the very first objects we encounter every morning, but there’s a new way around the addiction.

Amazon Echo Spot provides all the basic services such as alarm clock, weather reports, traffic information, and more while also servicing as a quality speaker. With Amazon Echo Spot, one would no longer access the social media or web browser by chance and yet enjoy full technology functions. That’s amazing, right? Well, before you get yourself one of these $129.99 devices, it’s important that you read through at least one Echo spot review to balance the value of your money, even though this price somehow regulates impulse buying. 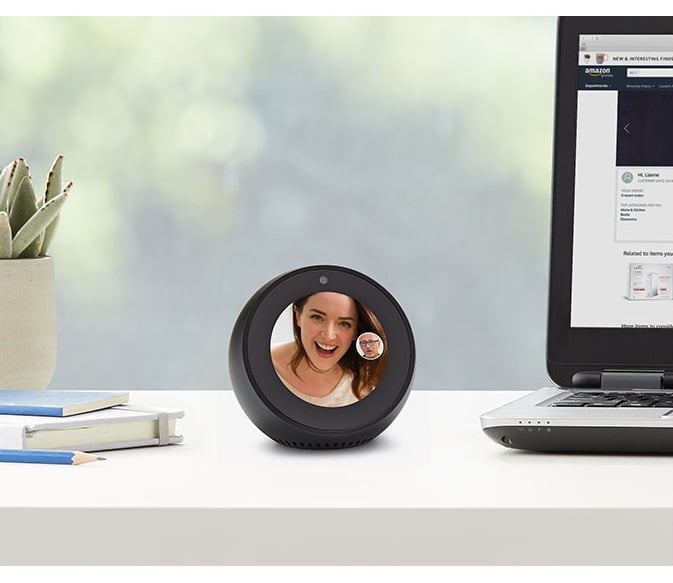 Amazon Echo Spot requires a wireless internet connection to function, and the primary way to interact with the device is with voice commands.

Amazon Echo Spot requires a wireless internet connection to function, and the primary way to interact with the device is with voice commands. I would suggest the addition of more touches on the device to enable its use when you need a quiet environment. At the device’s default mode, it constantly listens to speeches for the activation word (primarily “Alexa”), which can be changed and for full functionality. Amazon account is required to set up the device.

As a device with Alexa, Spot is capable of performing many things, most of which include the following listed in the device features.

Amazon Echo is best described as a device with the 8-ball-like design. Echo Spot is produced in two colors; black or white, there’s no choice of another color available. The device is 3.8-inches tall and has a diameter of 4.1-inches. Amazon Echo has a 2.5-inch round screen which inconveniences visuals from its 480 x 480 pixels display and at the top of the screen; within a large bezel (black border) around the screen is the device camera. This bezel is considerable large and should be reduced in subsequent productions to allow the screen to cover the entire face. 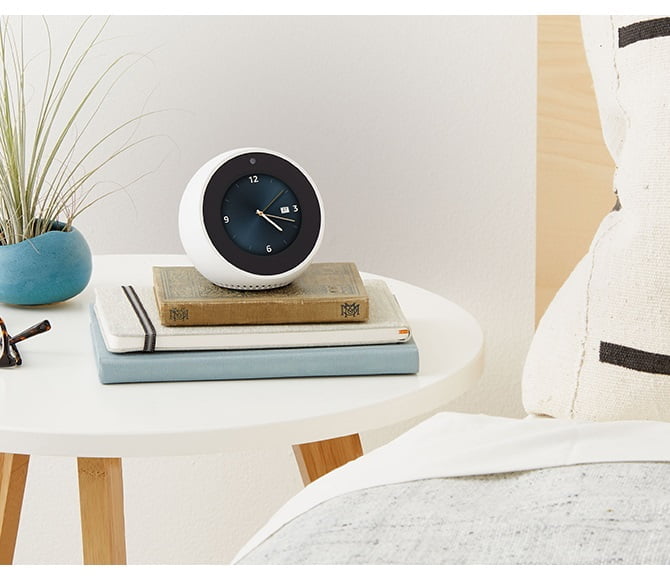 Amazon Echo is best described as a device with the 8-ball-like design. Echo Spot is produced in two colors; black or white, there’s no choice of another color available.

A button that controls the microphone and camera is centered at the top of the devices flanked by two volume control buttons; negative and positive. Behind these two buttons are pinholes for the four microphones used by the device. Spot has a 3.5mm audio jack and a power port below the pinholes. Underneath Amazon Echo is a 1.4-inch speaker which sounds better than that experienced in Dot.

2. can be connected to external speaker via Bluetooth and aux

1. Expensive than an Echo

Echo spot is essentially an Echo Dot with a tiny screen. It is a pretty good looking device but with $80 premium over echo dot, it adds little to the capabilities of an echo dot.