Earlier in December 2013, Amazon CEO and founder Jeff Bezos stated that drones would fly to customer’s homes in five years. Last year, Amazon unveiled several self-piloting electric Amazon delivery drones that can carry 5 pounds of goods and are designed to deliver items in 30 minutes by dropping them in a person’s backyard.  At the time, an Amazon official stated that deliveries to shoppers would start soon “within months.” However, it’s been more than 14 months since that statement.

Recently, the Federal Aviation Administration stated that the e-commerce giant Amazon is free to test its delivery drones across the United States, as long as the company flies its drones under an altitude of 400 feet and at a maximum speed of 100 miles per hour. It was just last month that the FAA issued a similar approval, but that was for an old prototype, one that Amazon said became outdated by the time the approval was issued. As of now, Amazon can freely test its Prime Air service, while also creating a substantial regulatory pathway for similar businesses who are interested in launching similar drone flight services. 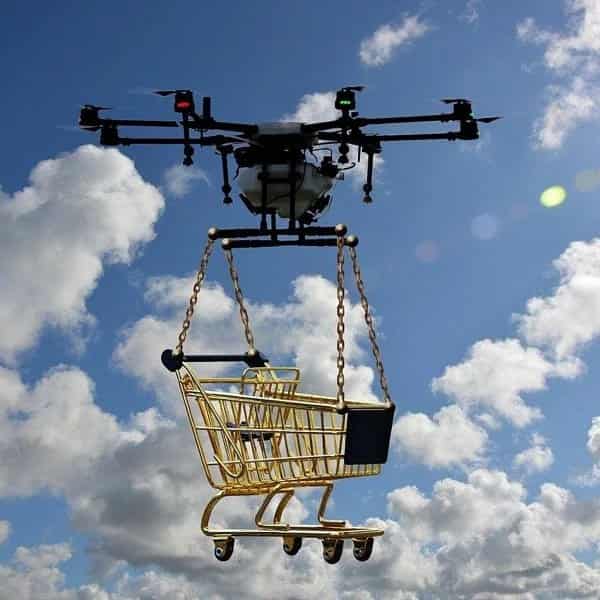 Amazon stated that the approval is a “crucial step,” but added that it is still testing and flying the drones.

Though this move by the FAA is a significant milestone for Amazon, for Prime Air, this is the ultimate vision- where drones would fly autonomously for many miles to reach the customers conveniently at their homes. However, it will still be a hamstrung by the FAA’s recently proposed rules that state that in commercial drone operations, the drones should stay within the operator’s line of sight at all times. Over time, if this rule doesn’t change or bend, it could create problems for the e-commerce giant. Amazon is also prohibited from flying its drones over the “densely populated areas,” in addition to following the guidelines. This means that the tests will be a highly limited version of what Amazon intends to accomplish through Prime Air.

When the rules were initially proposed in February this year, Amazon’s vice president for global public policy, Paul Misener, stated that “The FAA needs to think and expeditiously complete the formal processes to address the needs of the businesses and the customers. We are deeply committed to realizing our vision for Prime Air and are preparing to deploy them where we get the regulatory support we need.”

The Federal Aviation Administration recently stated that it granted Amazon the approval to deliver packages by drones. The conglomerate stated that the approval is a “crucial step,” but added that it is still testing and flying the drones. It did not mention as to when it expected the drones to start making deliveries to shoppers. The online shopping giant is working on at-home drone delivery for many years, but regulatory hurdles have slowed.

Seattle-based Amazon is the third Amazon drones delivery service that has won the flight approval, the FAA stated. Delivery company UPS and another company owned by search tech giant Google got the approvals last year.

Prime Day, Amazon’s largest annual shopping holiday, is nearly here. The mega-retailer will kick off the two-day event on October 13, 2020. And while it is taking place later in the year than typical, there will still be a ton of deals to get your hands on. In terms of electronics in particular, it’s your fortuitous to save big on some of the best and greatest nifty tech of the year.

We’re talking discounts on gadgets like true wireless earbuds, smart TVs, fast storage, sweet tablets and smartphones, from brands including Apple, Amazon, Samsung, Sony, Google and Microsoft. To safeguard you’re organized to score all the savings, here’s a breakdown of how you can snag the best tech deals on Prime Day.

How do you take advantage of the deals?

Well, for one, you’ll essential an Amazon Prime account, and if you don’t have one, it’s not too late to sign up. If you’re new to the service, you can score a 30-day free trial, or reactivate your subscription for $12.99 a month. You’ll not only get admittance to the Prime Day deals, but you’ll also get fast two-day shipping on choice items and entree to services like Prime Video and Prime Music.

And don’t forget to bookmark Amazon’s deal page. Prime Day deals start at 12 a.m. PT (3 a.m. ET) on Tuesday, but you don’t essentially have to delay until then to start saving; Amazon has already kicked off the sale with some early Prime Day deals.

Amazon Prime Day is gift double-digit discounts on thousands of items ahead of the holidays. Here’s how you can receive a credit card sign-up bonus while you shop.

Amazon Prime Day kicks off at midnight (3 a.m. ET), so you still have time to set contract alerts and add items to your wishlist. And if you truly hunger to maximize savings, you should choose which credit card you plan to use at checkout.

Using the right card can earn you up to 5% cash back and/or a profitable welcome bonus worth $100 to $1,000. If you freshly signed up for a credit card that offers a bonus and plan to shop on Prime Day, the purchases you brand can go toward meeting the expenditure requirements.

It’s also not too late to apply for a new card that delivers an immediate card number that you can use right away on Prime Day like the Amazon Prime Rewards Visa Signature Card.

CNBC Select reviews three ways you can save even more on Amazon Prime Day:

=>Apply for an Amazon credit card at checkout

=>Apply for an instant credit card

=>Use a newly opened rewards card

The humblest way to save $100 is to smear for the Amazon Prime Rewards Visa Signature Card at checkout. You have the selection to apply before you pay and if you’re approved, you can use the card right away and earn 5% cash back on Amazon.com. Plus you obtain a $100 Amazon.com gift card upon endorsement, which can promptly offset your Prime Day spending. There’s no least spending requirement to receive the gift card.

If you don’t famine an Amazon co-branded card, ponder opening a new card that provides both a welcome bonus and immediate card number. Choosing a card that gives you entree to a temporary card number after approval is key for Prime Day since you won’t have the time to wait around for your physical card to arrive in the mail.

Not all card issuers deliver instant card numbers, so review the card’s terms before applying. Many American Express credit cards, like the Blue Cash Preferred® Card from American Express, spring you the aptitude to receive an instant card number and earn a welcome bonus. New Blue Cash Preferred Card members can earn a $300 statement credit after you spend $3,000 on qualified purchases on your new card within the first six months from account opening.

You may have freshly opened a rewards card with a comfy bonus and Prime Day can help get you closer to earning the bonus cash back or points.

Since welcome advantage offers naturally expire within three months after account opening, only contemplate cards that have been opened after mid July 2020. Then appraisal the terms associated with the bonus offer — chiefly the minimum spending requirement — to recognize how much money you essential to employ to earn the bonus. If you’ve previously been spending on the card, you can subtract those purchases from the prerequisite to calculate how much more you need to spend.

For instance, the Chase Freedom Flex℠ offers $200 cash back after you expend $500 on purchases in your first three months from account opening. If you opened the Flex card last month and already spent $350 on the card, you’d only essential to spend $150 more to meet the $500 prerequisite and earn the $200 bonus. Spending $150 can be within spread during Prime Day, since a lot of items can add up.

And if you have a long list of big-ticket items to buy, ponder using a newly opened card with a large welcome bonus. The Chase Sapphire Preferred® Card is offering its highest-ever 80,000-point bonus that necessitates you to spend $4,000 within the first three months from account opening. This advantage is worth up to $1,000 toward travel when you convert through Chase Ultimate Rewards® or on grocery store, dining and home upgrading purchases with Pay Yourself Back.

Amazon’s Drone Delivery Service Will Now Be Available in Texas Too!