Amazon Prime Air, a brilliantly designed drone for delivery system. Yes, Amazon is back with a bang! This time, it has got the latest vision for drone and has brought along its high-profile TV show host, Jeremy Clarkson, for a ride. The company is providing a closer look at prototypes of drone, which it is planning for delivering packages to customers. Almost after two years since the Internet giant teased everyone for the first time about its vision of unmanned aerial vehicles, in a brand new ad, Amazon reveals teaser for what Amazon Prime Air might look like after it is approved by regulators. 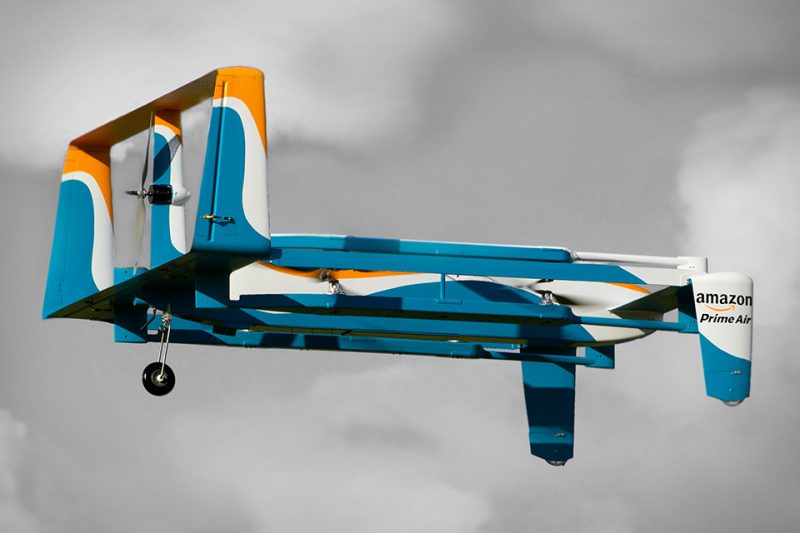 The slick ad demonstrates a new model for Amazon Prime Air drone. The prototype looks larger with custom-tailored elements for Amazon Prime deliveries rather than the model, which was unveiled a couple of years back.

Lets us have a closer look to its design segments.

The prototype has two different propeller systems; one is for horizontal travel and another for vertical takeoff to the destination. The Amazon Drone Prototype is an excellent integration of mechanism of an airplane as well as that of a helicopter. The change in design helps it in flying long distances easily, and glide in an agile and safe way, straight down or up. It is specially built with various designs that are fit according to various environmental conditions.

Amazon Drone Prototype isn’t the only design on which Amazon Prime is working on. In fact, the prototype is one of the many that company has been developing since a long while now. The demo in commercial efficiently appears to be pointing out that customers will have to set up a small landing zone somewhere in the backyard, which drone can perceive along with identifying, and land onto the delivering pad for delivery of the package.

The prototype includes superior technology of ‘sense and avoids’ in its safety features. Such system will be useful when there will be a significantly high amount of unmanned aerial vehicles for air traffic control systems to handle. This system will efficiently permit drones to avoid incoming obstacles on their path.

In the commercial for Amazon Prime Air, Jeremy Clarkson, mentions, “In time, there’ll be a whole family of Amazon drones; different designs for different environments.“

The other details of Amazon Prime delivery system, however, remains the same. The company has been reportedly pushing the FAA to permit them to use 400 feet below of airspace in order to deliver packages to houses at almost 15 miles of distance from warehouses, and weighing no more than 5 pounds. The entire process from receiving an order to destination delivery is assumed to take not more than 30 minutes.

The prototype by Amazon is facing too many regulatory barriers before it starts experimenting in the United States, so Amazon Drone Availability remains yet to be unknown.

An Amazon spokesperson said, “Putting Prime Air into service will take some time, but we will deploy when we have the regulatory support needed to realize our vision. One day, seeing Prime Air vehicles will be as normal as seeing mail trucks on the road.”

Perhaps, the latest teaser on prototype is meant to put public pressure on the regulatory barriers like the FAA, so the company can bring its dream concept of delivery system by drone to life.