Google on Tuesday showed off additional features for Google Maps at the ongoing I/O. The features include AR mode of viewing the streets as a means of helping you to follow directions in real time and a personalized “For You” section that recommends places in your neighborhood based on your interest. The AR Google Maps consists of Google’s existing Maps data and street viewing feature but this time as a live feed from the camera of your phone to delineate walking directions superimposed on the real world, helping you find your way as it leads. The feature does not require one to wear an additional AR headset even though it looks more like what Google Glass could offer.

Aside from showing directions, the AR Google Maps will also feature trending spots, nearby restaurants opening newly and a lot more based on how you have rated the locations visited on the app. It will be helpful in identifying nearby places and Google is also testing an inclusion of a helpful guide – augmented reality animal which will be helping in showing you the way. This was revealed by Google on a demo video which is not clear if it was technically built or if the feature will be coming soon on our devices in the nearest future. 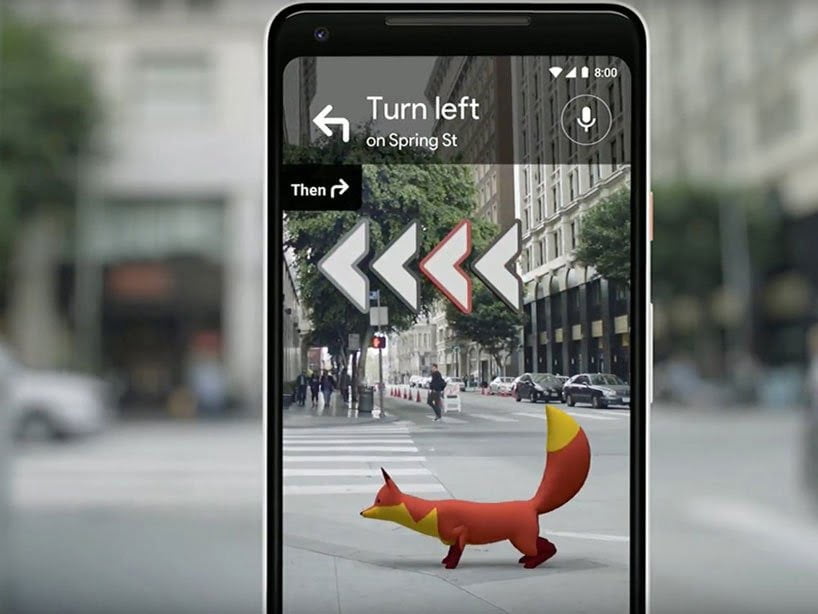 Google is planning to use a new “match number system” to generate a personal score for the personalized “For You” section on the AR Maps which will depict the user’s recommendations only. This will be based on your previous reviews and likes at the locations you have previously visited, like restaurants or recreation center. For instance, Google Maps will gradually know that you don’t like pizza or you like watching cricket and would score that for future recommendations.

The AR Mode can also help us to answer a few questions, like what is this in front of me? Where am I going? “Our team has been working really hard to combine the power of the camera, computer vision with street views and maps to re-imagine walking navigation,” Google said.

“To enable this kind of navigation experience, something more than GPS will be required, that’s why we have been working on what we call VPS, Visual Positioning System, that can estimate precise positioning and orientation using visual landmarks,” Google added.

Google also announced adding new features to Google Lens. The service which is available in Google Assistant apps and Google Photos can now recognize text in the real world through its newly added smart text selection, translating it to a device where it can exist as digital text.

Google Maps New Feature Will Let You Chat With Businesses