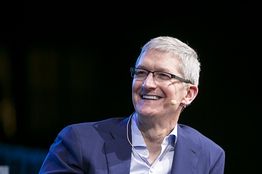 Apple CEO Tim Cook joined the WSJD Live Conference for the second time on Monday for its second annual function where he discussed his prosperous and blooming Apple Empire. He was interviewed by the editor of Wall Street Journal, Gerard Baker, who kept trying to bring some information out of Tim, as he has been keeping quiet over the next-gen hardware plans and sales performance. Cook chose to stay tight-lipped over a number of Apple Watch sales and Apple’s rumored project for the car, but he definitely answered questions regarding Apple Music revealing that it has over 15 million user base, which includes 6.5 million on the paid basis and 8.5 million trying to subscribe it for free. He happily described features for a cure and its capability to bring fascinating and new tunes based on individual’s demand.

On Apple Car rumors, Tim said that with the collaboration of robust software like electric propulsion and self-reliant driving, there will be a huge change in the automotive industry, but he didn’t offer any insights on supposed plans for Apple Car.

Cook said, “As we look at it, what we really want in the hopefully in the short term is, we’d like people as they enter their car to have an iPhone experience in their car.”

Another major insight that Cook offered at WSJD Live was on Apple TV. He revealed the product details that have kept everyone anticipating. Apple CEO Tim Cook said that Apple has started taking orders on Monday and the shipping will start by the next weekend. Specific dates haven’t been revealed yet, neither on purchase via in-store nor for online orders. The Apple TV is not just accomplished with a great hardware improvement, but it has got gaming in the forefront, remote that is touch-enabled, and the central spot of the TV has been taken by Siri.

Apple CEO Tim Cook expressed his huge concern for Data Privacy, “We think encryption is a must in today’s world. No back door is a must.“

Tim talked about the Apple iPhone; he said that the new upgrade plan for iPhone is created keeping in mind the owners as the main focus who wishes to update their iPhone annually. Under this new upgrade plan, the users will have to pay a monthly fee for carrier unlocked versions, which will be starting at 32 dollars per month. In this plan, every year the individual can trade their old handset and get a new iPhone along with AppleCare+.

When asked about the current patronage of Apple by Baker, he replied, “If we piss a few people off, at least they’ll say, ‘They made a great product, and I may not agree with this or that, but I respect that they’re trying to leave the world better than they found it.’ At least, that’s what I hope they’ll say.“

Tim seems quite adamant on Apple’s social responsibility criteria. He feels that his company can make this world into a better place than what it was when they discovered it. This includes diversity at Apple’s workplace, supporting the education system and reducing the negative impact on the environment.

He replied, “Steve [Jobs] formed Apple to change the world, this was his vision. He wanted to give technology down to everyone and empower everyone to use it. He wanted to take it out of the glass house, the corporations, and the rich people that had the technology. That is still our drive.“

As earlier Technowize reported, Apple has been going through a really tough and busy week. While it started off with the pulling of its Chinese apps like Apple News China the week ended with losing patent lawsuit battle against the University of Wisconsin and paying a huge amount. It was reported that after the interview, Apple CEO Tim Cook has been planning to fly to Beijing. Currently, Beijing accounts for almost 20% of Apple’s revenue, and it is the place where the tech company is planning to launch 40 Apple Stores by the end of 2015.