Apple Inc. and Salesforce.com Inc. on Monday announced a strategic partnership for developing powerful iOS apps for businesses. As a part of the collaboration, Salesforce is redesigning its native app – Salesforce Mobile App to integrate the latest features available on iOS and will launch it in early 2019.

“We’re excited to work with Salesforce and that their industry-leading CRM will embrace native iOS and deliver exclusive new features on iPhone and iPad,” said Tim Cook, CEO, Apple.

Salesforce is integrating its native mobile app for enterprises with latest iOS capabilities such as deep support of digital voice assistant, Siri; Apple’s messaging service, Business Chat; the most secured facial recognition technology and many more.

In addition to this, the San Francisco-based CRM Company also plans to introduce a new Trailhead Mobile App, debuting on iOS later next year. It will also create powerful iOS apps for small businesses and industries catering to specific customer needs.

“Together, Salesforce and Apple are defining a new era of mobile innovation with native apps on iOS, and empowering millions of people with access to Trailhead and the skills they need for the jobs of the future,” mentioned Marc Benioff, Chairman and co-CEO, Salesforce. 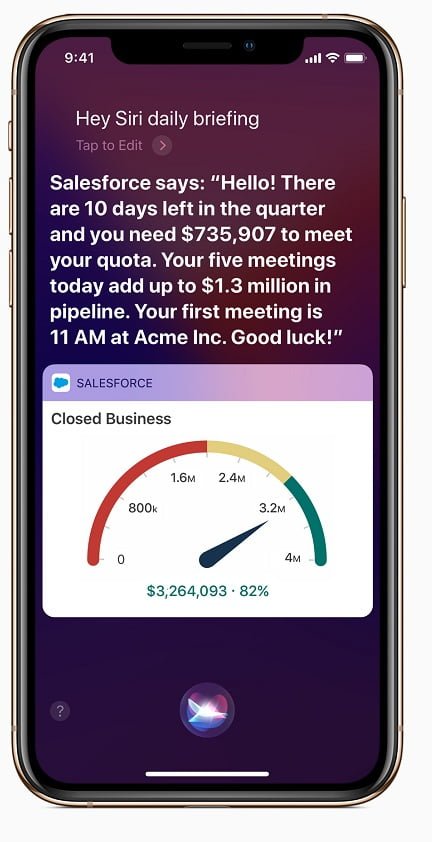 With this collaboration, Apple and Salesforce are leveraging the best of both the worlds to each other’s ecosystems, reported Firstpost. Salesforce has over 5 million developers to create back-end supporting applications for businesses and now using the redesigned app, it will be able to woo more Apple users.

“I don’t think I’ve met with a single customer in the world that doesn’t want me to help them do more with Tim’s products,” Benioff told Reuters in an interview.

The Cupertino giant has nearly 20 million developers building apps and software for Apple’s operating system, but majorly focusing on consumers. Apple has been trying to encroach into the enterprise market for a long time. Over a time, it has built a partnership with SAP, IBM, Cisco Systems, GE, Deloitte, and Accenture.

With Salesforce as a partner, Apple can reach its affluent and diverse client base including Toyota, Adidas, T-Mobile and Aldo and thus, holding more enterprises on iPhones and iPads.

Cook’s major focus is to integrate “Hey Siri” in the Salesforce’s native app which is highly used in sales industries.

“If you look at the enterprise in general, voice has not been used as much as in consumer,” said Cook in an interview to Reuters. “We’re going to be able to provide the sales rep instant access to things using your voice instead of clicks and going through different apps. We’re changing the way people work, and that’s always been at the heart of what Apple is about – changing things for the better.”

Furthermore, the developers of Apple and Salesforce are coding the first ever Salesforce Mobile SDK for Apple’s own programming language, Swift. The new SDK, which will be available by the end of this year, will facilitate enterprises and other developers to build new iOS apps on the Salesforce Lightning Platform.

Source code for Apple's Lisa to be released in 2018