Apple HomePod Review: Apple, is this all you’ve got?

Apple introduces HomePod to increase market pressure on Amazon and Google. The HomePod features include all available on the market counterparts except a video screen.

Apple has responded to Google Home, and Amazon Echo as the company joins the smart-speaker-producers market with HomePod – a smart speaker that wants to be at the center of your music life. But hold on; let’s not forget that Apple has been unique in their products. We had thought that Apple would allow Android users to sneak in and enjoy the music style from Apple HomePod, but that was completely wrong. It’s strictly a party for iOS users!

While other manufacturers are leading the chase for a frontline in the excellent delivery of smart speakers, Apple HomePod delivers a powerful audio none would resist. Yes! Alexis and Google Assistant have both made many front pages and provided impressive technologies; we can slightly accept that Apple has a few catching up to do. And again, not everyone would agree with the proposed HomePod price.

HomePod has a small-tower design with round edges wrapped by acoustic mesh grille. The sound system is powered by seven beam-forming tweeters and a 4-inch woofer facing upwards which Apple claims could deliver distortion-free audio in almost any room. The well-distributed tweeters around the device provide a 360 sound effect. Apple HomePod comes in two colors; white or grey-black – a perfect match for any home décor. The product lacks built-in Bluetooth but features strong Wi-Fi connectivity supported by the Apple devices. 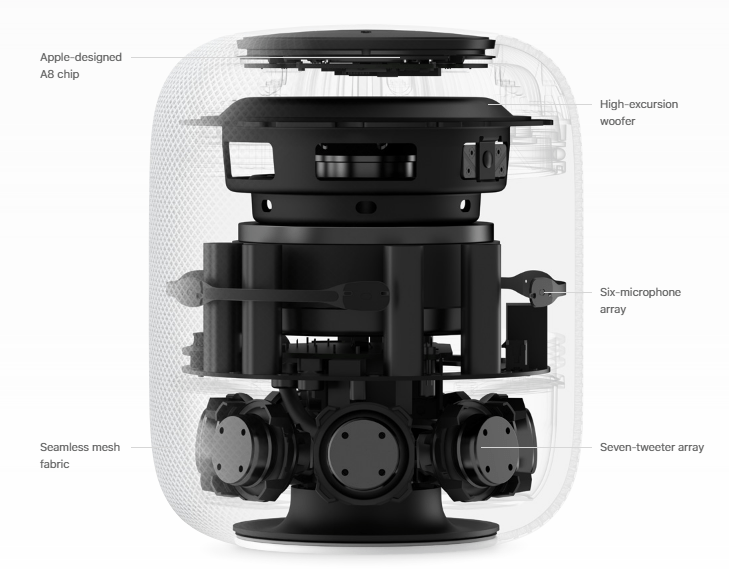 Apple HomePod didn’t miss the smart features offered by Amazon Echo or Google Home. The device which has a room-sensing technology can provide remote control to your smart home devices. That’s where Apple stunned a lot of us! It’s an indication that Apple is seriously catching up with the old time smart wireless speaker manufacturers who have started this design for more than three years now.

Just like its counterparts, Homepod uses voice commands to perform all tasks. The device is embedded with eight microphones which allow it to receive commands even when the music is loud. HomePod can control a wide range of HomeKit devices, including lighting, heating, air conditioning, etc.

Apple’s Siri technology powers the intelligent feature in Homepod. The feature also permits users to know about the details of a playing track, control music while also responding to questions Alexes or Google Assistant can respond to. The Siri feature also delivers reminders, calendars, places calls, and more.

Apple HomePod release date was previously slated November 2017 before the company released a statement that the product would be delayed until 2018. The statement says, “We can’t wait for people to experience HomePod, Apple’s breakthrough wireless speaker for the home, but we need a little more time before it’s ready for our customers. We’ll start shipping in the US, UK, and Australia in early 2018.”

HomePod price in the U.S. and U.K. released so far is $349 and €349 respectively. The product price for other locations is yet to be disclosed.