Apple has introduced the latest version of its most popular iPad with pencil support. The new 9.7-inch iPad with Apple Pencil support is built to offer users more flexibility; ability to be more creative and productive. It’s a more versatile unit with greater performance, 24 hours battery life and more capable than ever. The new iPad is a portable device that’s very easy to use. It’s very swift in making handwritten notes, sketching ideas and marking up screenshots. Featuring the A10 Fusion chip, advanced sensors and a larger Retina display, the new iPad delivers immersive augmented reality, vivid colors, and gorgeous detail.

“iPad is our vision for the future of computing and hundreds of millions of people around the world use it every day at work, in school and for play. This new 9.7-inch iPad takes everything people love about our most popular iPad and makes it even better for inspiring creativity and learning,” said Greg Joswiak, Apple’s Vice President, iOS, iPad and iPhone Product Marketing in a statement released on the company’s website.

“Our most popular and affordable iPad now includes support for Apple Pencil, bringing the advanced capabilities of one of our most creative tools to even more users. This iPad also has the power of the A10 Fusion chip, combined with the big, beautiful Retina display, advanced cameras, and sensors that enable incredible AR experiences simply not possible on other devices,” he added.

Apple iPad delivers a natural drawing experience with its high-resolution touch sensors. The built-in advanced sensors measure both tilt and pressure while also providing pixel-perfect accuracy. It features plan rejection technology, allowing users to rest a hand on the screen while using the pencil. 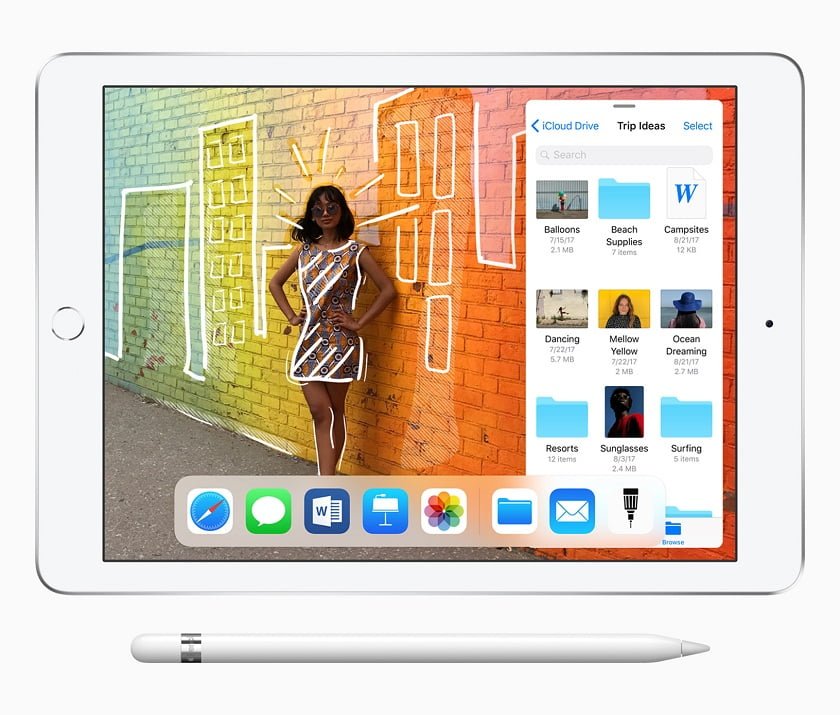 Apple Pencil brings the advanced capabilities of the most creative tools

Built with 64 bits desktop-class architecture, the A10 Fusion chip delivers up to 40% additional CPU performance and 50 percent extra graphics performance for full support to various high-graphics apps. It features two cameras: front and rear that offer exceptional HD video recording which can scan documents with low-light performance. It also has built-in accelerometer and gyroscope for motion tracking and to support future AR apps. The new 9.7-inch iPad has an aluminum body to support swift mobility and durability. iPad’s wireless chip delivers ultrafast connection which is twice the speed of cellular data connections. With Apple SIM, users can enjoy a wireless connection in over 180 countries.

The new iPad has two 32GB models; Wi-Fi ($329) and Wi-Fi + cellular ($459) available in space gray, silver and new gold design. Apple is selling the pencil separately for $99 and promised free Personal Setup for every customer buying from any of its retail stores. Schools can purchase the two models at a reduced price, starting at $299 and the Apple pencil for $89.

Orders for the new Apple iPad commenced yesterday, March 27, with deliveries starting before a weekend in more than 25 countries, including Canada, Singapore, the U.S., China, the UK and other major European regions. India, Thailand, Russia, and Turkey are some of the countries that will receive supplies in April.