Apple iPad 2018 Review: A Versatile Tool for Students and Professionals

Apple’s iPad 2018 is a very significant release from the company. It takes care of a little of what Apple has been missing in the market for PC replacement. Being more versatile than any of its iPad products, with improved processing speed, battery life, and most importantly, it’s compatible with Apple pencil (sold separately) which makes it a device for students. Did I forget to mention that iPad 2018 price is the most budget-friendly tablet in Apple’s lineups? Even with the improved features. The only criticism is its lack of keyboard connection module, making some people review iPad 2018 as a device that lacks the full flexibility in use. The good news is that’s not exactly the case considering the iPad 2018 features. You’ll see a lot of reasons why I don’t agree with such conclusion about the device.

If you’re expecting to see a different design from the already existing iPads before iPad 2018 release date, let’s just accept that you’ll be disappointed. The new iPad is very much identical with its predecessors, mostly with the previous iPad in terms of weight and physical attributes. With no surprises, there’s no difference in the way it feels when held; thin, light and great to hold. At a closer look on the new iPad (2018), you’ll notice it’s looking more like iPads produced five years ago; due to its thicker bezel. Yes, it has a large bezel around the highly responsive 9.7-inch touchscreen edged by the usual solid metal chassis, and a Home button featuring Touch ID. The device comes with the same 8 megapixels f/2.4 rear-facing and 1.2 megapixels f/2.2 front-facing cameras. The secret to its amazing speed is that the iPad 2018 features an A10 Fusion processor and a 2GB RAM which powers a considerably lighter operating system. 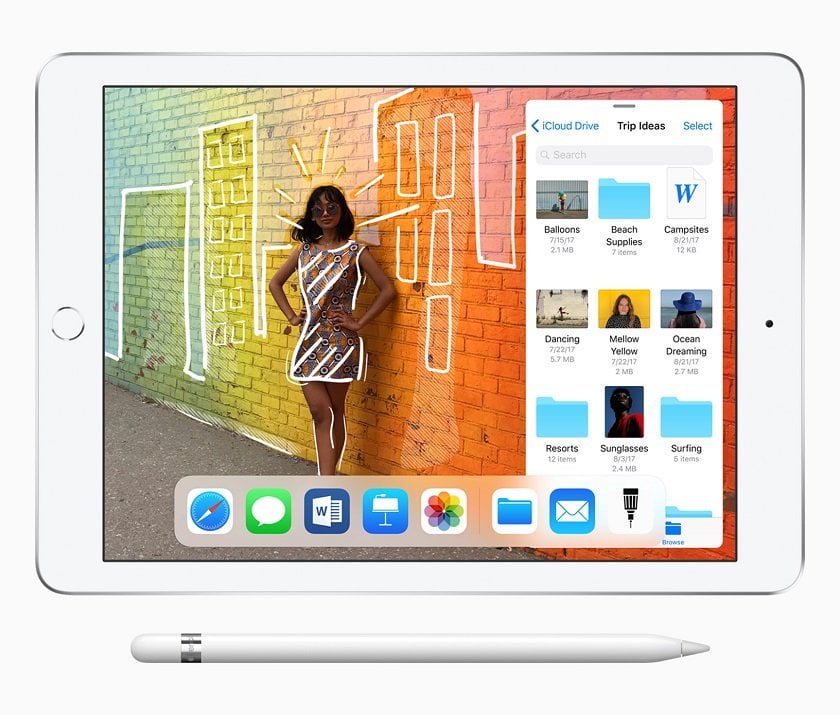 A major notable shortcoming of the device is its lack of smart connector for an external keyboard. This questions the hype; it’s a device for students since they perform a lot of typing. Well, that doesn’t mean you can’t connect a keyboard at all, the Bluetooth device can take care of that comfortably, though it usually lags, but fairly okay. Bluetooth keyboards are in different qualities and prices. You won’t notice sluggish response using a high-quality type. Also, Apple is providing rugged keyboards through Logitech for only schools.

Apple’s introduction of split-view multi-tasking in iOS 9 got the cool finish it deserved late 2017, at the introduction of iOS 11. The operating system introduced an interface that’s entirely brand new for the new iPad, with a rejigged Control Center and the appropriate app switcher. The platform improves the functionality of the newly introduced pencil, with cool ability to write and draw inline in Notes and Mail. Far more interesting, the device can read your handwriting better, providing the option to search for written notes with keywords.

The availability of Keynote, Pages, Numbers and Microsoft Office ranks the iPad as a productivity workhorse and a true replacement for laptops. The free apps are considerably more powerful than Google’s cloud apps, though most of us are stuck on our favorite computing apps, they are just there if you’ll need them.

The new iPad shares the same battery duration with the 2017 model. You’ll get around 11 hours of 50% bright screen time, which is very good except on busy days. You’ll lose about 9% of the battery for playing a 3D game for an hour, 7% after an hour of streaming via Wi-Fi or browsing the web. 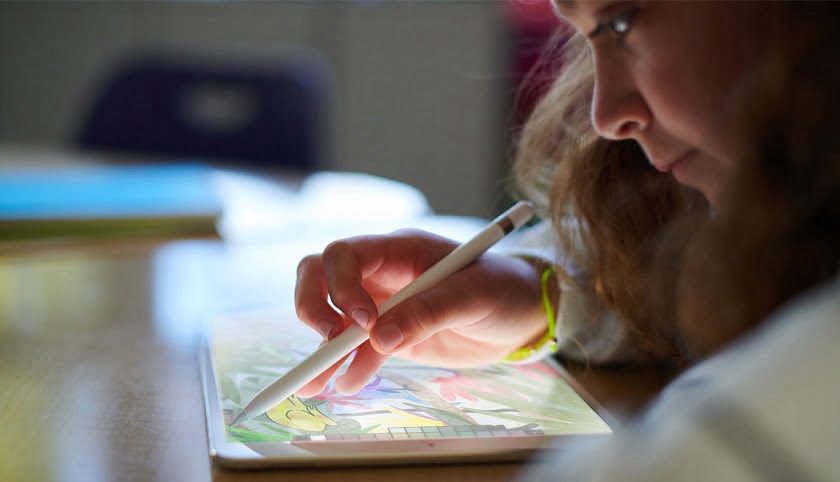 Continual streaming of video gave me adversely 11 hours before the battery died. If you’re required to use the iPad for a few hours in a day, then you’ll enjoy the unit for a whole week without any need to charge it. The standby mode consumes a maximum of 2% in a day and charging it is where you need time; approximately 4hours to charge fully from 1%, using the power adapter it’s supplied with.

Apple iPad 2018 price starts at $329 for the 32GB variant with Wi-Fi only and $459 for the model with both Wi-Fi and cellular. The 128GB capacity is available at $429 for the Wi-Fi only and $559 for the Wi-Fi + cellular variant. Apple announced accepting preorders during the launch on March 27 and confirmed that the iPad 2018 release date will be around April 2 in the U.S., U.K., Canada and most EU countries. iPad 2018 release date for the remaining countries was slated this month, May. 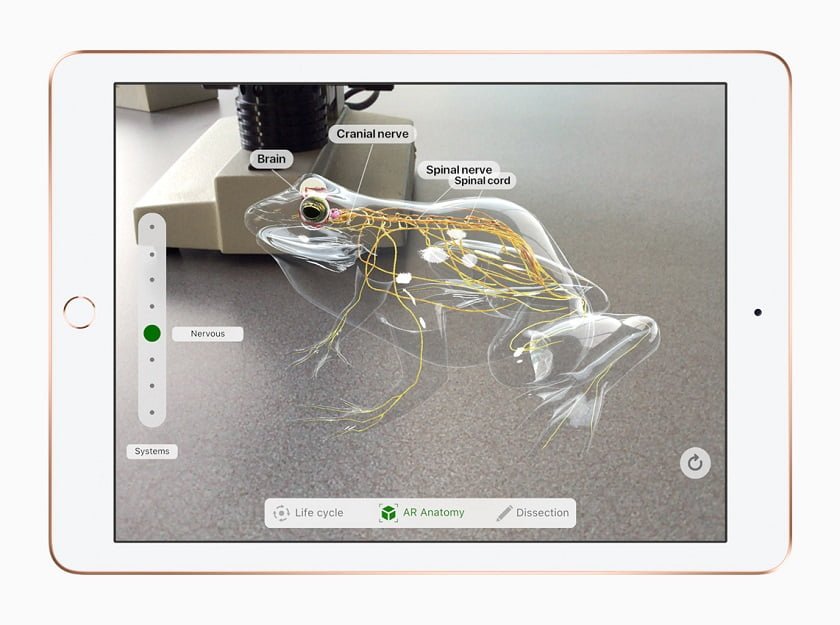 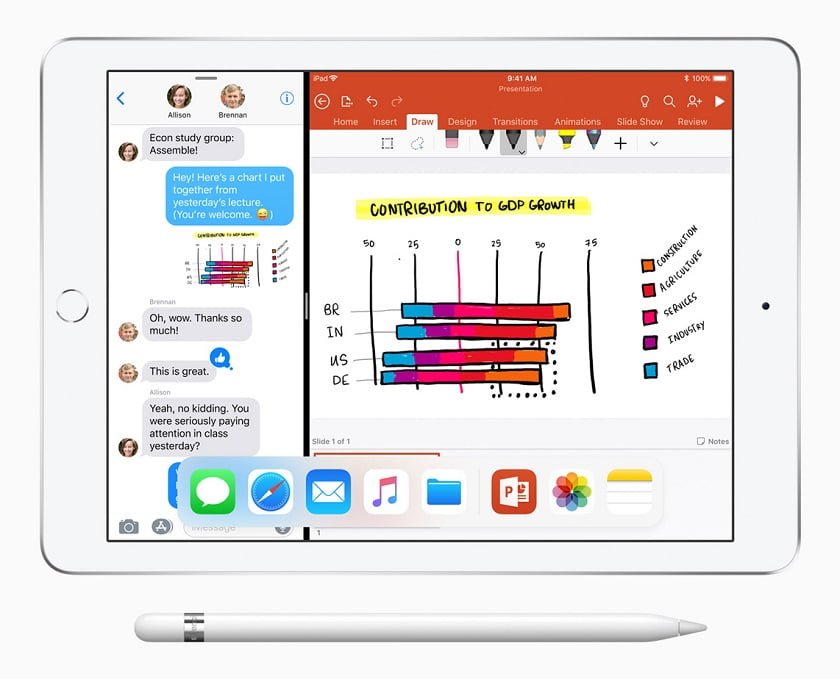 iOS 11 makes iPad more capable than ever with features like enhanced multitasking.

Apple iPad 2018 is a powerful tool anyone can have as a laptop replacement. It’s a great deal mostly if you have an older model. Of course, it’s the cheapest iPad with a 9.7-inch screen, even with the additional features. It’s definitely a good buy!