The MacBook Air has made a fresh comeback with interesting new features: a Touch ID fingerprint sensor, a new Retina display, and the T2 security chip. Other quite good stuff includes the laptop’s quality build, smaller bezels, larger trackpad and most importantly its smaller design. We had thought earlier that MacBook Air price this year would fascinate every fan, but that’s not entirely the case. The best price is at the high-end option which ultimately lures you into the MacBook Pro realm.

Apple may have introduced MacBook Air as a cheaper variant of its MacBook Pro, but the price difference rarely justifies their performance ratings. The 2018 MacBook Air price is at $1,199 – that’s $100 difference with a low-end MacBook Pro, which has a more powerful processor but weighs 0.27 pounds more. This makes it uneasy for anyone to choose between the existing MacBooks and the new Air, aside from multimedia professionals.

What stands out the most is the display on the new MacBook Air. There’s so much difference with the old Air that had a resolution of 1,440 x 900 pixels and the new MacBook Air with 2560 x 1600 pixels resolution, thanks to the “Retina” display. The display is not a touchscreen, but that’s totally fine. Apple is yet to be convinced about putting a touchscreen on a laptop. However, the quality here is superb and extremely rich-looking. 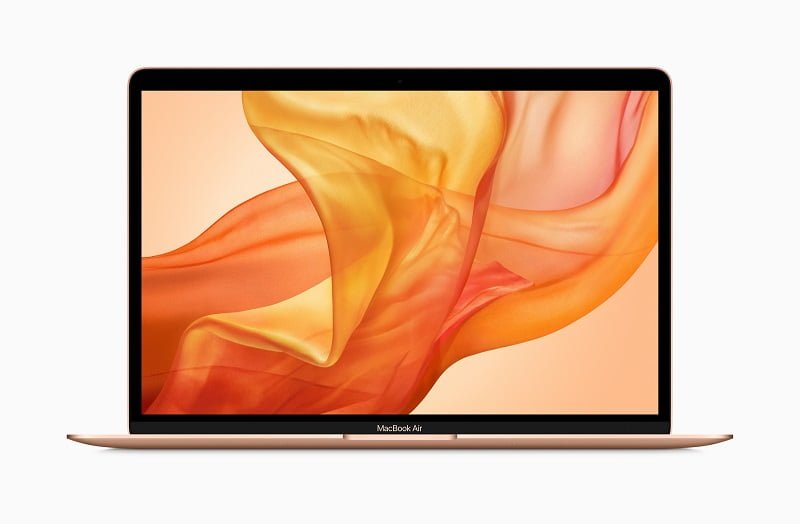 Apple has finally settled for a common keyboard for all MacBooks. The keyboard on the newest MacBook Pros is exactly the same with the keyboard on the new Air. It’s basically Apple’s newer “butterfly” design which has a very shallow key travel. Apple placed a thin, silicone barrier under the keys to make it quieter but it’s still prone to be broken by debris, except the new barrier is supposed to solve that challenge.

Apple’s fingerprint sensor, which is controlled by the T2 chip, provides a responsive and quick login process. It also works well with both Apple apps and third-party apps. Face-recognition technology is a vital feature missing here – whereas it’s included in most Windows laptops. Apple referred the Touch ID as “the most secure boot process of any notebook,” while introducing the new Air but referred Face ID as “more secure than any tablet or computer” shortly after while introducing the iPad Pro. Fingerprint authentication is an old-fashioned security system and we don’t need to get the news from Apple. But it’s difficult to say why we are not getting Face ID on Mac yet.

As a coprocessor, the T2 chip handles the entire security of the Air aside from the protecting your fingerprint. It turns off the microphones when once the laptop is closed, encrypts the SSD and handles other duties such as encoding audio and video processing for the speakers.

The new MacBook Air is powered by a 1.6GHz dual-core Intel’s 8th gen Core i5 processor. Though this is not the latest processor out there or comparable powerful as the new MacBook Pro, it’s a lot more powerful than the 12-inch MacBook Air. However, for anyone that builds graphics, process large pictures or edits 4K videos for a living, the Air is absolutely not for you. The laptop will edit pictures smoothly in Lightroom, handle as much as 20 browser tabs at once, and run as much as 10 apps at once. It has two USB-C ports located on the same side, this obviously make things more difficult. Get ready for #donglife until you upgrade all your accessories.

On the battery, if your workday falls within 8 hours, then you’re in. Apple claimed the new MacBook Air battery life is 12 hours of web browsing time but that’s not completely practical. No one would remain on a browser for all the hours they want to be using the laptop. The bigger screen and more power are arguably draining more from the battery. While the new Air is not a battery champion, expect around 8 hours of fairly active use.

The new MacBook Air is considerably the cheapest route into the Mac iOS ecosystem. It’s a decent buy for travelers whose work is mostly on computing. Multimedia professionals that must have a life in Mac will have to spend extra 100 bucks for the MacBook Pro with the lowest configuration. Some travelers would prefer the iPad Pro if they are looking for something a lot smaller and quieter.