The new update by Apple is full of color, iPhone-like icons, and features.

Apple recently released the Big Sur as a free update to the macOS and is the new redesign in years. The core system of Mac is now similar to parts of traditional desktop computers and features that are used in the iPad and iPhone.

The Big Sur also marks the end of an era for Mac’s software. As Apple for years is working on merging the design and operation of its desktop and mobile software, Big Sur becomes the significant step towards fulfilling that goal. It will also be the first macOS to have the traditional Intel Macs in use since 2004.

The Big Sur is similar to an iPad, with a luminous menu bar, dock, and clean interface. Even the half square-half circle program icons look similar to the iPhone, though with more depth in its designs. The Mac has the on/off toggle switches, and the default color scheme of the new interface is more colorful in both light and dark mode.

The apps in the Mac look more cleaner now, thanks to the icon-heavy toolbars and full height sidebars. The new update is more fresh and colorful in comparison to the previous versions of macOS. However, most of its features are the same as previous versions. 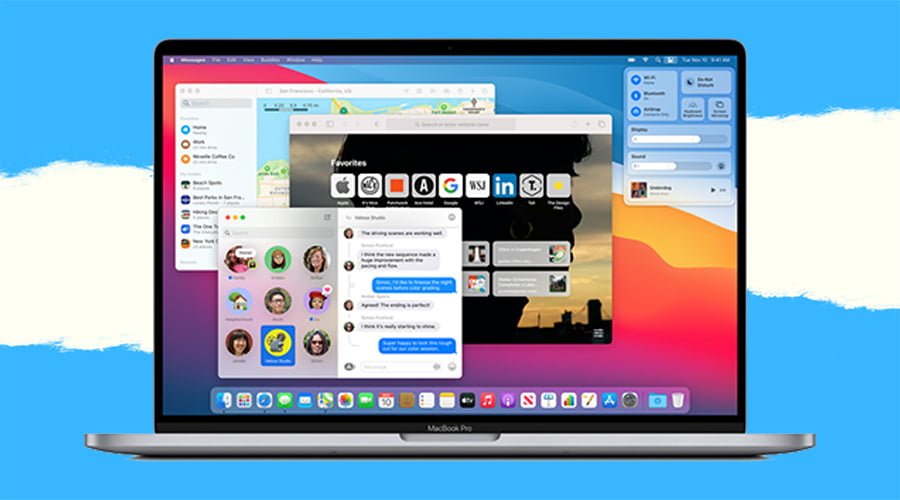 The Control Center of the new update has a collection of settings and toggles for shifting and managing functions like volume, screen brightness, wi-fi, Bluetooth, and many more. A majority of the settings can also be expanded to reveal more options like toggles for dark mode and night shift. The notification center has iOS-like cards to display the notifications. These cards can be grouped or expanded as per the user’s preference. There are also new unified widgets launched with iOS 14 that replace the traditional macOS widgets.

The Messages app on the Mac has new upgrades in emojis, pinned messages, and new group messaging features like WhatsApp @-mentions and Slack in-line replies. Users can also indulge in gif messaging. Additionally, the Apple Maps feature has been more enhanced for route planning, locating shops, and an improved 3D view for street exploration.

The safari feature also witnessed changes with favicon symbols visible on the tabs by default. This makes notifications management easier when the user hovers the pointer over a tab. The start page also received several new customization options with features like bookmarks, reading lists, Siri suggestions, iCloud tabs, and many more.

The significant update changes to the macOS are the addition of Chrome-style extensions and privacy report. The privacy report features all the trackers on any website and about the websites that monitor the movements over the web in the last 30 days. Apple’s new translation service is an integral part of Safari and supports up to seven languages.

The macOS 11 Big Sur incorporates the iPhone and iPad’s visual design and the functionality of Mac together. It may differ in looks on the first boot, but the functionality and working mechanism are similar to the previous macOS versions.