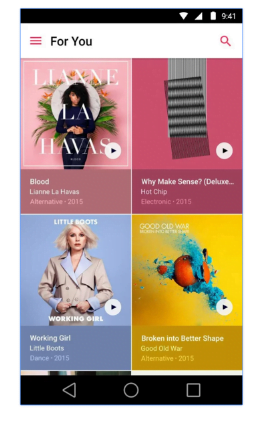 A new version of the Apple Music app for Android rolled out today.

The latest Apple Music update gives Android users access to music videos inside of Apple Music, which was previously exclusive to iOS users. Android users can also sign up or upgrade for a family billing plan, which gives access to six members of the family to Apple Music content for $14.99 a month, rather than $9.99 per month/user.

Apple has been working on making videos a selling point of Apple Music. It is widely rumored and speculated that Apple is soon to introduce a television show starring Apple exec. Dr. Dre to promote Apple Music.

Apple Music for Android was launched in November, 2015, making it one of the most significant Apple for Android user release of the year. It was touted as the iTunes-powered alternative to streaming music services from Spotify and Pandora.

The latest Apple Music update follows the recent addition of widget support, and the one that came before that which let users download content to an SD card in the phone.

The Android app is available across all countries where Apple Music for iOS is available. The app can be downloaded from Google Play Store for free. It comes with a free trial for the first three months.

Below is a complete changelog for the Apple Music for Android update:

You can now enjoy thousands of music videos on Apple Music—view popular ones featured in New or search for the music videos from your favorite artists.

You can now also sign-up or upgrade to a Family Membership, which allows up to six family members to enjoy Apple Music together