Apple Inc. is lately pushing hard on turning its dream autonomous car project into a market disruptor. In May this year, the company joined hands with Volkswagen to create an electric driverless vehicle integrated with in-house developed sensors and software system. Interestingly, Apple has mostly remained silent about on autonomous car project due to its stringent privacy policies.

According to the new Apple patent published on August 1, 2018, the Cupertino giant has mentioned about a Heads Up Display system, or in simple words, an augmented reality (AR) windshield system, as first reported by Fortune.

Stretching on the theme of artificial intelligence, the alleged AR windshield would support FaceTime sessions to connect passengers sitting in separate autonomous cars.

“In some embodiments, an augmented reality display system included in a vehicle enables visual communication between an occupant of the vehicle and a remotely located user, including an occupant of a separate vehicle,” mentioned in Apple patent.

The virtual display in Apple driverless car is designed to track the roadway at all times so that its augmented reality display elements are aligned to the road in front of the driver every time. 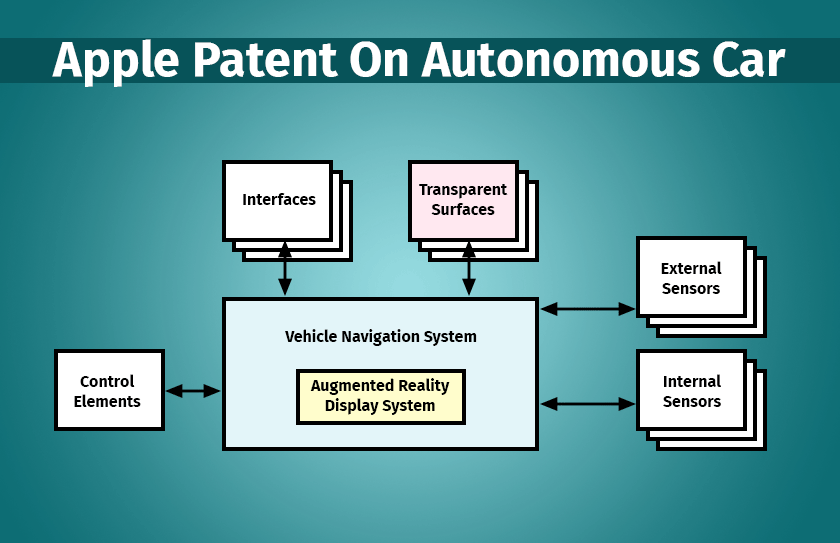 The combination of external sensors will facilitate generating real-time data of the external environment screening on the transparent surface or windscreen of the car.

On the other hand, the internal sensor feature may measure the stress level in the car occupants by scanning their eye motions, heart rates, postures, breathing etc., and screen the results on AR windshield, cites Mashable.

Furthermore, the control system in the autonomous VNS can contain a combination of elements such as steering control, motor, throttle control, brake control, speedometer, accelerometer, and any other similar controlling system.

Of course, it is too early to get excited as the patent submissions on extra-ordinary technology seldom land into the real world. Though anything coming out of Apple hub these chances get slightly higher.

The trillion-dollar company Apple has traveled a long journey of developing the most advanced technological ecosystem. It began with designing an all-integrated audio player, pioneered a mobile device with a single button and later attempted to develop a secured face-recognition system along. The company’s technology-oriented mindset has perpetually sensed the market’s new needs even before the people identify them.

Apple team has always experimented with innovative hardware and software technology and has never failed to disappoint its loyal community. Yet, there is one segment where Apple still lags behind other tech companies and that’s the autonomous car division.

Nonetheless, the new developments indicate that the Apple autonomous car project will certainly see the light of the day, if not now then soon. And the Apple car or iCar will definitely reflect the company’s spirit of innovation.