The ASUS Chromebook Flip C436 lacked the ports and battery life that earlier made the C434 a tremendous and powerful Chromebook.

The ASUS Chromebook Flip C436 was announced at the CES 2020 and went on sale from March 2020. It had a starting price of $800 for the i3 model, and $1000 for the premium i5 model and the extra $200 on the premium model gives a doubling of the RAM and a quadruple amount of the internal storage. There is also a fancy Aerogel White lid over the Silver on the high-priced model.

The Intel Core m3 processor of the laptop isn’t much powerful, and the C434 has more powerful processor options. However, they are hard to find and cost almost the same as C436. 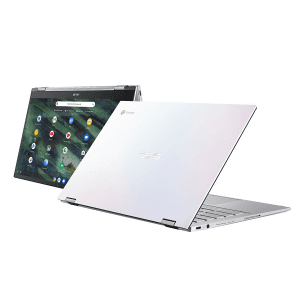 Like its predecessor model, the lid of the ASUS Chromebook Flip C364 pushes up towards the back of the keyboard for efficient typing. This, however, makes the laptop almost balance on the back edge of the laptop lid instead of being flat. The laptop has magnets that keep the C436 closed.

The sides of the C436 model are sleek with a speaker located on each side and match the top-facing speaker bar located above the keyboard. There is also a USB-C port on each side of the device. To its left side, there are the headphone jack and power/volume buttons, and the right side houses the microSD slot.

The C436 has a backlit keyboard and an adequately lit display. Though the laptop may need charging at some point, the C436’s battery will usually last a full afternoon of regular heavy use. The ASUS C436 has backlighting inconsistencies which are less than a significant shortcoming for an $800-$1000 laptop.

The ASUS Chromebook C436 is a pretty efficient Chromebook and hardly stutters expect in a few Android apps not optimized for Chromebooks, The fingerprint sensor of the laptop is a good upgrade, and the laptop has powered speakers. The laptop is an exquisite refinement of one of 2019’s best Chromebooks.