ASUS’ ROG Flow X16 and Strix Scar 17 are two of the company’s most powerful gaming laptops, and they’re both packed with high-end specs that give you the performance you need to compete in today’s gaming arena. These two ASUS gaming laptops offer a wide range of impressive features, including powerful graphics cards, high-end processors, and stunning displays. But what sets them apart from other laptops on the market is their flawless design.

The ASUS ROG Flow X16 is one of the thinnest gaming laptops at just 0.8 inches thin — and it weighs just 4.4 pounds! It is the third addition to the Flow family. Its sleek design makes it easy to carry around wherever you go so that you can play games anywhere, anytime.

The ASUS ROG Strix Scar 17 is also thin but slightly heavier than its sibling — but still very portable for its size. It also has a gorgeous 17-inch display with 240 Hz and 360 Hz refresh rates. It also has NVIDIA RTX technology for buttery-smooth gameplay. And it is without screen tearing or lag issues. 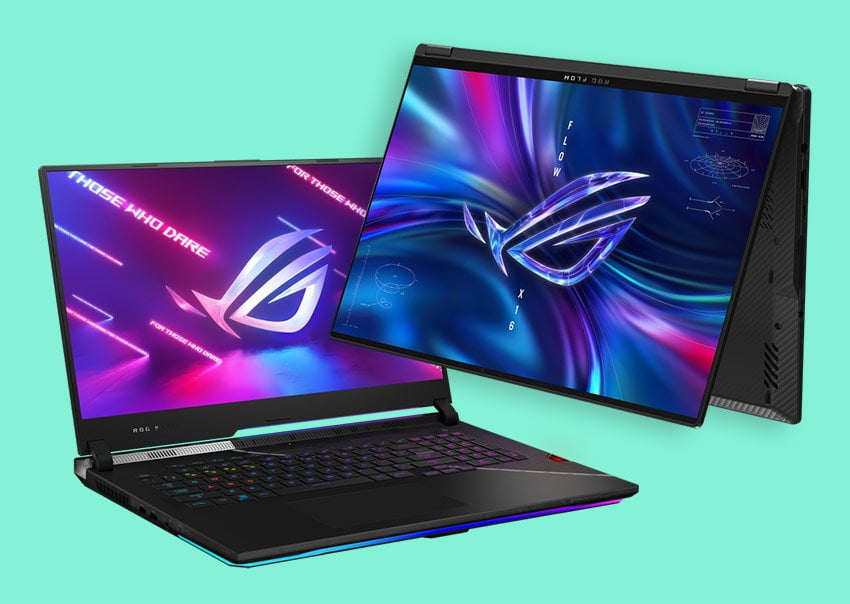 The display on the ASUS ROG Strix Scar 17

The ASUS ROG Strix Scar 17 is also a high-end gaming laptop that comes with an Nvidia GeForce RTX 3080 graphics card and an overclocked Intel Core i9-12900HX processor. It is a 17-inch laptop and has a GPU performance of about 175 watts. The graphics card has a memory of up to 64GB of DDR5 4800MHz RAM. It also has up to two 2TB PCle 4.0 solid-state drives. It has two display options: an FHD display having a 360Hz refresh rate and a QHD display having a 240Hz refresh rate.

Performance of the ASUS ROG Flow X16 and Strix Scar 17

These two ASUS gaming laptops are the most powerful devices that have been added to the Flow and Strix families so far. They both have very high performance. The Flow X16 has a Thermal Grizzly’s liquid metal and the Frost Force technology that helps to cool it down when it’s hot and increase airflow. The system also has three fans, which would help to keep the temperature moderate when in use. It also has a 360-hinge and touch screen support, which can be placed as a tent, used as a tablet, or as a clamshell device. The laptop also supports pen input.

The Strix Scar 17 is said to be a more powerful gaming laptop than the former. It has a power adapter with a rate of up to 330W. This helps it to charge a lot faster within minutes. However, gaming laptop reviews show that it’s not advisable to use it outside due to its low brightness. Compared to Flow X16’s thermal metal, it would be made of a new thermal compound called “Conductonaut Extreme.” With the display options, you could get 100% RGB coverage and a great gaming experience.

Both laptops are great choices for gamers who want something stylish but powerful enough to run their favorite games without any lag or slowdown while playing them online with friends!

They are both powerful gaming laptops that produce an excellent experience for their users. It makes it easy for them to use it anytime, anywhere.