The new Zenbook from Asus looks absolutely incredible and a dream companion for astrophiles.

The ASUS Zenbook 14X OLED Space Edition is simply a class of its own. This happens to be an extremely special one in the glorious Zenbook line up. Previously, we have seen some of the most fascinating laptops from Asus in this very series.

This year itself, we witnessed the arrival of the Asus Zenbook 14X OLED, which still remains an excellent choice among the best value-for-money laptops in 2022. Couple of months back, the ASUS Zenbook 17 Fold OLED ran riot through the foldable laptops market, globally.

The ASUS Space Zenbook is a commemorative edition, which celebrates the historic feat of its predecessor, the ASUS P6300. In 1998, it went to the Mir space station and despite all odds, continued to function seamlessly for as many as 600 days. 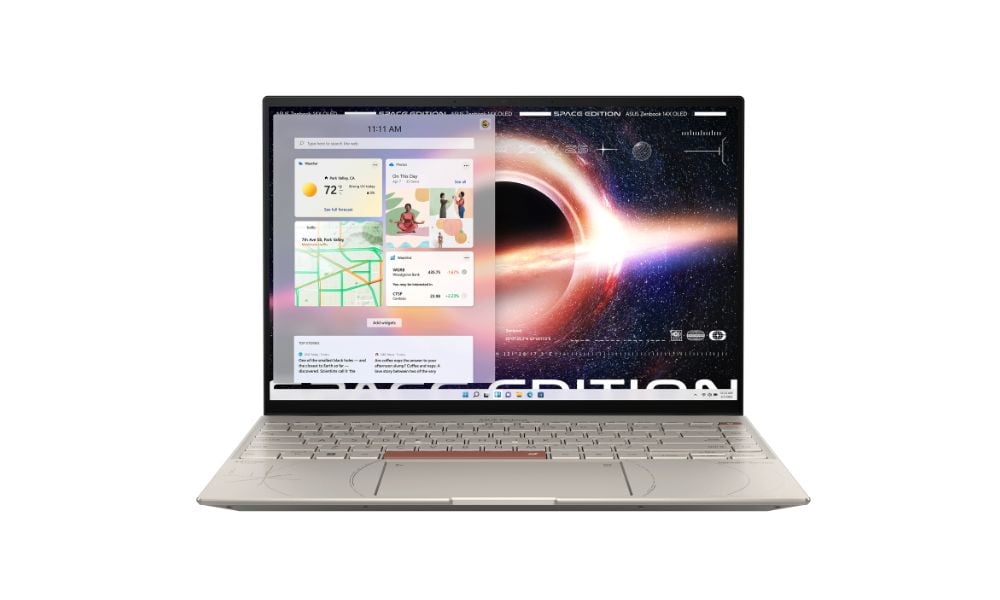 ASUS Zenbook 14X OLED Space Edition: Out of the World

Asus’s first-ever laptop made a giant leap to reach space. It was a strong statement. The fact that it accomplished a 600-day long journey at the Mir space station, is indeed remarkable. Especially, considering the reported incidents of fire and an array of other troubles out there.

Cut to 2022, Asus has successfully made a name for itself in the world of laptops. When it comes to the best gaming laptops, Asus remains a force to reckon with. Its Zenbook series is one of the most celebrated laptop line-ups in the world, at the moment.

But the ASUS Zenbook 14X OLED Space Edition is really out of this world, in every sense of the word. The very appearance strikes a chord with not only the astrophiles but anyone who’s curious about things that surround us. This meticulously crafted special Zenbook comes with an unusual 3.5-inch OLED monochrome display screen on the lid. To add to the excitement, it can be customized to a great extent. Incidentally, it’s a futuristic 3.5-inch OLED companion ZenVision display, which shows personalized notifications, animations or text.

The entire laptop has been designed with sheer brilliance and manages to reflect an effortless aura, just like the most definitive characters in the space. What grabs the eyeballs in the first place, is the minimalist design infused with top-notch craftsmanship and modern approach. The Zero-G Titanium color strikes fine balance with the predominant space theme.

In a nutshell, it belongs to a different league altogether. There has been no such space themed laptop before the ASUS Space Zenbook. Taking every aspect into consideration, it’s an astrophile’s paradise.

With the ASUS Zenbook 14X OLED Space Edition at your disposal, you have ample ‘space’ to explore, courtesy of a wide range of world-class functionality. Probably, the leading USP apart from the unique space theme, is certainly its ultraportable feature. Let’s have a close look at its stellar salient features.

The ASUS Zenbook 14X OLED Space Edition is bolstered with the luminous presence of a 2.3GHz Intel 12th-generation Core i7-12700H CPU with 14 cores (six performance and eight efficiency cores). In addition to that, it comes with Intel Iris Xe graphics alongside 16GB RAM and 512GB SSD. Bluetooth 5.2 and Wi-Fi 6E are also there to make the overall experience completely seamless.

Thanks to a gem of a combination of a 16∶10 2.8K OLED NanoEdge PANTONE Validated 14-inch display, coupled with an unreal 92% screen-to-body ratio and TÜV Rheinland-certified eye care, its visual capabilities are almost beyond comparison. Its OLED screen manages to cover 100% P3 color gamut, which is indeed a major plus.

The keyboard appears sturdy and can be operated with effortless ease, thanks to the soft-to-touch keys. Interestingly, the power button includes a fingerprint scanner for one-touch login with Windows Hello. Moreover, the smooth touchpad can double as a number pad (touchpad navigation remains unaffected while displaying the number pad).

It’s extremely lightweight and weighs only 1.5kg. The ASUS Space Zenbook is certified with the US Space Systems Command Standard (SMC-S-O16A) for equipment intended for use outside our planet’s atmosphere. ASUS claims it’s proven to sail through shock and vibrations (up to 2000 Hz) within a wide temperature range from -24°C up to 61°C. It also ticks the US Department of Defense’s MIL-STD 810H durability standards.

How much does the ASUS Zenbook 14X OLED Space Edition cost?

Where can I get the ASUS Zenbook 14X OLED Space Edition?

You can buy the ASUS Zenbook 14X OLED Space Edition, directly from Asus’ website or from Amazon.