Daqri, a California based augmented reality start-up has created a 3D printer powered by Hologram. The 3D printer can print solid objects faster, exhibiting a new kind of head-up display.

The super-fast 3D printer uses a laser to cure a light activated monomer into a solid plastic. The technique is to scan the whole object at once using constant coherent radiation or hologram to create the perfect shape. The whole scanning of the desired object makes the process rapid and precise. The 3D printer flashes a green laser which shines up into a petrified dish full of goo. A paper clip then emerges which seems ghostly at first but turns solid eventually. In seconds, the clip is clean and is ready for use. 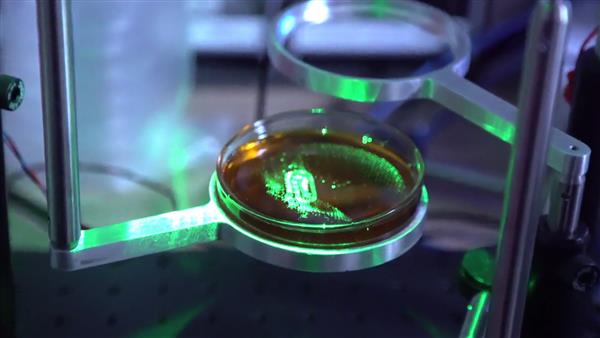 The heart of the device is a holographic chip developed by Daqri. The chief advantage of this holographic chip is its ability to create holograms. Perhaps, the best thing about the holographic chip is that it doesn’t require any complex optics to create holograms. It is a compact silicon plate which uses a tiny grid of tunable crystals to control the measures of magnitude, time delay or phase of the reflected light which shines at the surface of the chip from the laser. The 3D printer has an accompanying software that adjusts the crystal. The crystals then create the patterns of interference in light forming a 3D light field for forming the shape.

The holographic chip creates create solid objects into the containers with the light activated monomers. Currently, it can make small objects such as paper clip in around 5 seconds; unlike the normal printers taking several minutes.

Since the Hologram powered Daqri’s 3D printer does not use the layer by layer scanning technique for printing the solid objects. This way, the output doesn’t suffer from minute strains. In a back and forth technique, the output product is affected by grain-sized heaps or strains.

Is it worth it?

The current hardware is only limited up to printing only shallow solid objects; paper clip for instance. But the Augmented reality start-up is making attempts to increase the depth with the size of the holographic chip.

The heat could also be a hindrance. Polymerization (here the process of converting light activated monomers into the solid) is an exothermic process. The exothermic process has a tendency release heat. Moreover, the rapid printing process is likely to release heat. From the loss of heat there are chances of some important parts getting affected.

The chip also has some very productive applications. The chip can create displays bearing information on multiple planes. It can match up the resolution equivalent to 720p HD screen to display an image many meters ahead.

Currently, the augmented reality start-up is exploring various avenues to develop a chip that has the capability to scan any solid object and is also compatible to hardware. We look ahead to see very productive rreal-time3D printing soon.