West coast rap legend Tupac Shakur made a ghostly re-appearance on the stage at the weed and ecstasy throbbing Coachella night in 2012, where he stunned the roaring crowd saying ‘What up Coachella?”. The shirtless Tupac Hologram that was beamed onto the stage was created by digitally piecing together using an old parlor trick, most commonly used by stage illusionists “pepper’s ghost” which dates back to the 16th century.

A Canadian startup, H+ Technologies, is banking on this antediluvian fancy reflection technique to present a tiny, 3D digital world that one can interact with. 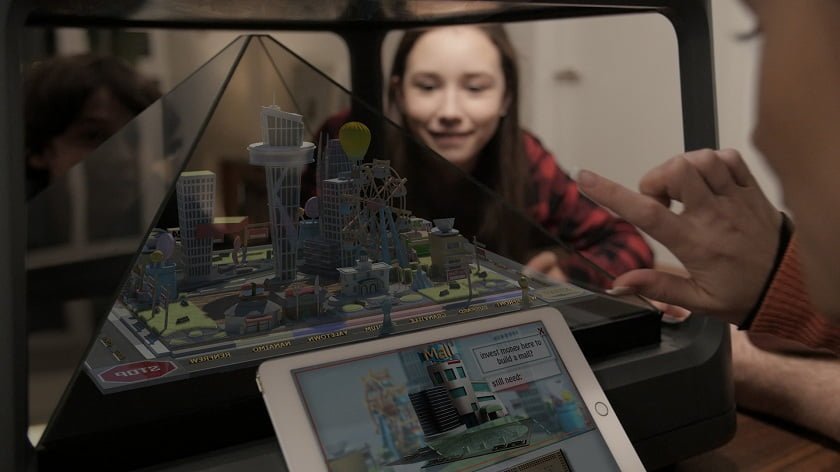 There has been much chatter since June about its tabletop holographic device called Holus, which promises to transfigure 2D digital content from your computer, smartphone or tablet into a 3D ‘hologram’. The startup kicked off its Kickstarter campaign a month ago, smashed its target within 17 minutes and has quintupled its goal of $50,000, with 8 days left to go.

May be Princess Leia had one of these Hologram device, when she asked R2D2 to play a holographic video message in which she pleads for help from Obi-Wan Kenobi?

The box-like tabletop device cushions three-dimensional images projected onto the walls of the prism inside. The result is a seemingly 3D image which can be viewed from 360 degrees around the machine, without the need for putting on augmented reality glasses. Viewers can interact with the 3D image via motion tracking or an external interface such as a traditional gamepad, or a gesture input device like Microsoft Kinect or Leap Motion, or Emotiv’s Brain Sensor electroencephalography headset.

The device is designed for playing games, turning people you want to video chat into a digital mini-mes. It can conjure a “social campfire” experience in the home, help businesses give holographic presentations, help kiddies can learn through more natural visual interactions with digital content and complex 3D images. 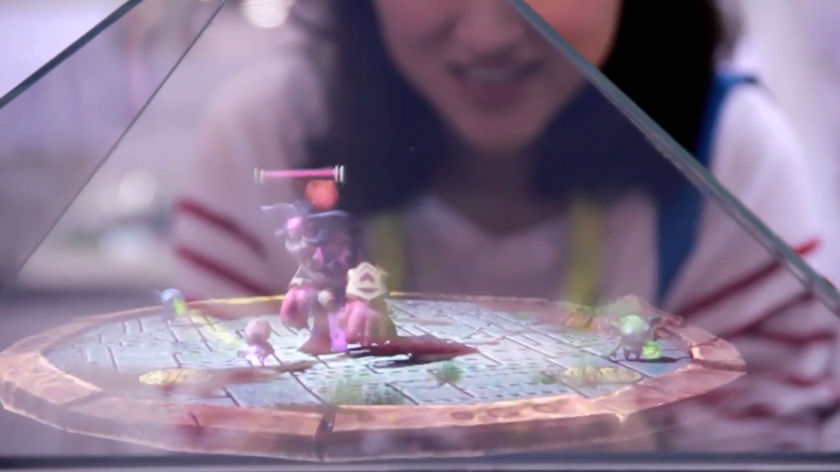 Holus comes in two versions: Pro and Home. The Pro edition is slightly bigger, and comes with an HDMI port and an SDK license for developers to create Holus-specific games and software. The SDK tool will support two leading game engines, Unreal and Unity3D, as well as 3D scanning plugins like Occipital. It also includes embedded speakers and an ambient sensor that dims the display automatically. While, the Home edition has two smartphone charging docks.

H+ Technologies plans to unveil upscale versions in the near future, after showcasing a room sized model for use at multiple tech shows and conferences, and installing one at the BC Ronald McDonald House to create an interactive holographic experience for children staying there.

“Whether that be teaching children in an immersive manner, or revolutionizing how global business relationships are formed, we hope Holus will have a hugely positive impact on everyone. We can’t wait to bring it to the Kickstarter
community,” says H+ Technology CEO Vincent Yang.

The Holus device doesn’t come cheap, although an early bird price on Kickstart for the Home version is CAD $850 (£446) or CAD $950 (£498) for the Pro version. Global shipping is free, and the company aims to deliver units starting in August 2016.

Nura Headphones will adapt to your hearing preferences