The Blue Origin flight will be the 29th mission of the New Shepard program.

Blue Origin, Jeff Bezos’ aerospace company, will launch its third human spaceflight on Saturday morning from Launch Site One in Van Horn, Texas.  The flight, which was postponed to Saturday from Thursday due to bad weather, will, in all likelihood, take off at 9.45 a.m EST.

The space mission will carry six passengers in all; four of them are paying for their flight and two are honorary guests. Former NFL player and “Good Morning America” co-anchor Michael Strahan and Laura Shepard Churchley, the eldest daughter of Alan Shepard, who was the first American to fly to space. The others on the flight are Dylan Taylor, Evan Dick and Lane Bess and his son Cameron. Bess and his son will be the first father-son duo to fly to space.

The Blue Origin flight will be the 19th mission of the New Shepard program. Most of these flights have carried payload and research material. 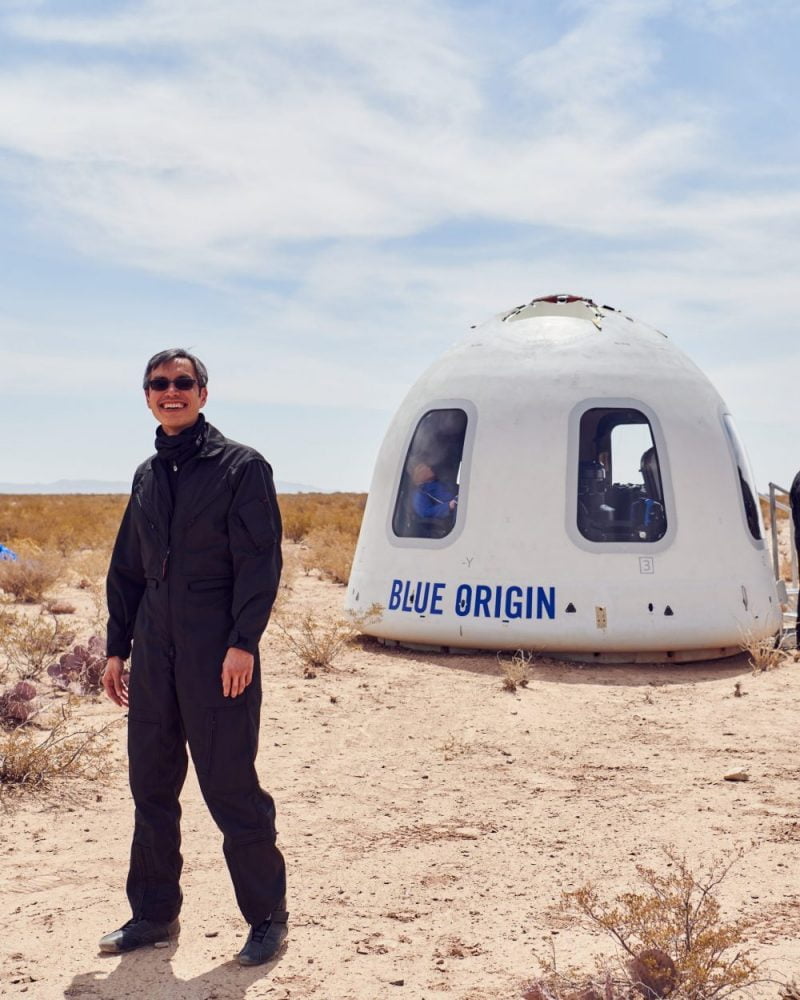 The Blue Origin flight will be the 19th mission of the New Shepard program.

The New Shepard rocket is designed to launch vertically from Earth, carrying up to four passengers in a crew capsule on top. It then climbs above an altitude of roughly 62 miles (100 kilometers) over the Earth, where the planet’s thin atmosphere gives way to the vacuum of space. Here the capsule and the rocket separate, and then both parts of the vehicle fall back to Earth. In all, the flight lasts about 11 minutes, from liftoff to capsule touchdown.

Blue Origin’s first human spaceflight was undertaken on July 20, and the passengers were Jeff Bezos, his brother Mark, 82-year-old Mercury 13 aerospace engineer Wally Fink and 18-year-old Oliver Daemen. He was the company’s first paying customer. The company says it has also sold nearly $100 million in tickets to paying customers, though it has not said how many.

Bezos is the second corporate billionaire to blast off to space. Richard Branson of Virgin Galactica took off almost nine days before him for his space flight. Bezos’ capsule was completely automated, unlike Branson’s, which was piloted.

Bezos took off on the 52nd anniversary of the Apollo 11 moon landing. The flight landed in Texas after an 11-minute run. Dutch 18-year-old Oliver Daemen.

The crew members took along a number of historical items, including the goggles of Amelia Earhart and a brass medal made from the first hot air balloon, which flew in 1783 – the first time humans left Earth in control of the flight. A piece of canvas from the Wright Flyer – the plane flown by the Wright brothers was also carried along.

The second flight was launched on October 13 and included William Shattner, 90, who was the sort of the original StarTrek. Audrey Powers, Blue Origin’s Vice President of Mission & Flight Operations, joined crewmates Chris Boshuizen and Glen de Vries for the flight,

The whole idea for Blue Origin is to transition to a commercial space flight company with its space ship New Shepherd.

According to Blue Origin, the flight readiness review for Saturday’s flight has already been completed. Live coverage of NS-19 will be shown on BlueOrigin.com, and updates will be provided via Blue Origin’s Twitter account.