British Warehouse Robots are coming to the US

British-based Ocado Group Plc is a wholly-independent online supermarket. To put it plainly, unlike its competitors, Ocado does not own any physical store and its complete focus is on home deliveries done from its warehouses. These distribution facilities are called order fulfillment centers.

Besides this, there is one more interesting aspect of Ocado operations. More than a thousand warehouse robots pack groceries in the Ocado order fulfillment centers located in England. They slide on a three-story-high aluminum electric grid and pick up grocery items from the crates. Finally, the Ocado warehouse robots deliver these items to the packing station, where they are then stuffed into bags.

The Ocado automated warehouse technology is data-centric and capital-intensive. Yet, this is the newest, popular and highly demanded concept emerging in the grocery e-commerce market.

The US supermarket giant Kroger has taken a 5 percent stake in the UK-based grocery e-commerce company in this May.

Leveraging Ocado technology, Krogan has identified the three primary sites for building new, automated warehouse facilities, reports Forbes. It further plans to locate up to a total of 20 sites to install this technology in the US over the first three years of the agreement.

The US supermarket giant Kroger hasn’t mentioned any deadline for the rollout yet. However, it anticipates to begin shipping groceries from an automated warehouse within two years, cites Bloomberg.

Kroger’s recent move can be attributed to competing Walmart and Amazon in the offline and online grocery market.

“There’s no doubt that Ocado’s infrastructure is the best way for Kroger to deliver,” says Kroger CEO Rodney McMullen. 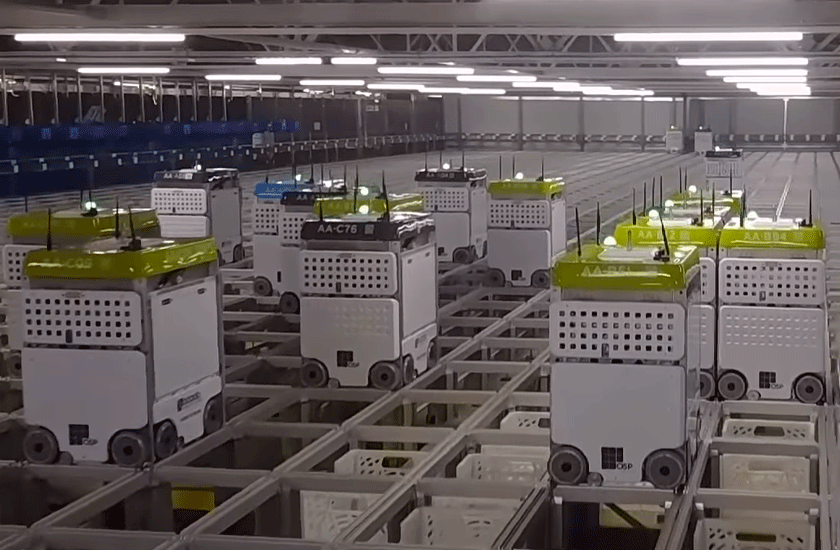 These automated warehouses can turn out to be genuine game changers in the future of online retail. The warehouse robots can pick up 175 items per hour or 50 grocery order in 5 minutes, according to Ocado’s annual report. This performance is remarkably faster than manual efficiencies.

In the automated distribution centers, thousands of the warehouse robots continuously fill data into Google Cloud Storage and Google BigQuery. Subsequently, the Ocado’s data miners apply machine learning to harvest insights that can enhance their efficiencies. The analyzed data would ultimately be converted into physical operational gains – for instance, examining wear and tear patterns to optimize the warehouse robots maintenance.

“Designing it all has been immensely complex,” says Tim Steiner, Chief Executive Officer of Ocado, the fast-growing online grocer. “The infrastructure, technology, and software we needed didn’t exist, so we created it,” he added.

Started as a concept in 200, Ocado started operations in 2002. In 2009, it launched its first app, ‘Ocado on the Go’ for the iOS, followed by landing on Android devices in 2010. The Ocado grocery app is also available on the Apple Watch since 2015.

From November 2017, Ocado entered a new phase of its existence. It shares soared by 20 percent then following an agreement with French Casino Group.

Earlier this year, it grabbed a deal with Canadian supermarket chain Sobeys. And post deal with Kroger last month, Ocado shares jumped 45 percent valuing the business at $7.03 billion. It entered into the FTSE 100 index of the UK’s largest companies.

Looking at the financial aspect, Ocado group recorded turnover of about $2 billion USD in 2017. Likewise, Though the grocery online store is capital intensive, it managed to earn EBITDA profit of about $116 million USD.

Today GS1 UK, a non-profit organization, announced that Ocado and Tesco have become the first retailers to sign agreements to use the new productDNA. The productDNA is an initiative adopted by retail industry members to provide precise and consistent information about the products that they offer.