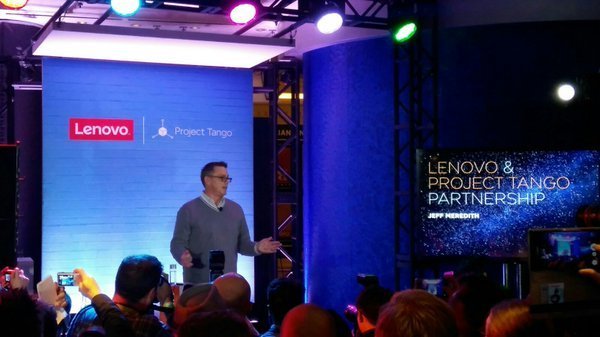 Chinese tech behemoth Lenovo is all set to create a history by being the first manufacturer to introduce a Project Tango based smartphone and the concept of 3D mapping into it. The smartphone manufacturer has partnered with search engine giant Google for this initiative.

The search giant has already mapped the universe in two different dimensions, now it wants the third dimension, and it seems that it has taken the Chinese company onboard for help. The smartphone will be released sometime in the middle of 2016.

Both corporations unveiled their plans on collaborating to manufacture and sell Project Tango based smartphone with 3D mapping and various other features, specially developed for Google’s Tango, at the ongoing Consumer Electronics Show (CES 2016) in Las Vegas.

Merger of Project Tango and Lenovo

The Chinese smartphone maker didn’t disclose a complete detail on the yet-to-be-named smartphone, but during the press release at CES 2016, they announced that the handset would be of maximum 6.5-inch, it will be available for shipping in summer 2016 for a price of less than USD $500, and the processor chips for the smartphone will be supplied by Qualcomm.

Project Tango has a sole aim of providing smartphone users with easy outdoor and indoor navigation and tracking using 3D Mapping. Google along with other tech partners has been working since a long while for developing computer vision software, cameras, and sensors, which can provide real-time access to 3D maps based on the surroundings.

Due to this technology by Project Tango, the tablets, devices, and smartphones can easily map the dimensions, measure the object distance, and display the data using augmented reality. For example, a person buying furniture can browse through this and get an idea of how it might look like when placed in a room.

So far, only a limited number of Project Tango based devices have been released by the search engine giant, for the purpose of testing.

Project Tango Lead, Johnny Lee, used prototype developed for testing, at the press conference to demonstrate several applications regarding the new technology. This latest technology has huge possibilities in future in the world of gaming.

The Chinese PC maker, Lenovo, became one of the top power players in the smartphone industry after the acquisition in 2014 of Motorola mobility from the search engine giant. Since almost a year now, Lenovo has been working with Google’s team of Tango.

The project might illuminate a good amount of light at the end of the tunnel for Lenovo, whose handset business has been struggling lately.

The main aim of Google is to create a 3D digital replica of this world, with buildings’ interior details. If the search engine giant manages to introduce their project in various Android phones present across the world, millions of users one day could be mapping and sharing their surroundings, and share the surrounding and location details to remote servers of Google.