Cryptocurrency Exchange has been dented in a new spot, to be specific, the most bottom level of 2018 on Thursday morning as reported by Business Insider.  All the major cryptocurrencies are underperforming by the range of 5% to 7%. 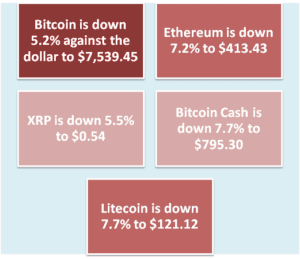 Ethereum slides down to its 2018 lowest market value, dipping consecutively on the second day after hitting $451.19 on Tuesday morning and touching $460 per token on March 18, 2018.

So far, the largest Cryptocurrency Bitcoin has performed its worst since inception. It reached below $7,700 which is known as “key support level” for Bitcoin as told by Analysts at the London Block Exchange.

The downfall of Cryptocurrency exchange has knocked down the sentiments of investors. After a spectacular 2017, the current year has brought no cheers for the sector. According to CoinMarketCap, the total Cryptocurrency market value has gone down from a pinnacle of $800 billion in December to start the year with $608.2 billion to around $280 billion as of Thursday.

Goldman Sachs’ head of Global Investment Research, Steve Strongin analyzed that the market performance of all the cryptocurrencies tends to be interlinked. For example, when Bitcoin is reached its peak point in December, other followed the trend. Similarly when it tumbled to 65 percent of its market value, so did the other cryptocurrencies. The market lost hundreds of billions of dollar in one go. This is a warning sign for investors as all the cryptocurrencies behave as a single asset.

Considering the boom of Cryptocurrency Exchanges in the US and Asia, the unregulated financial market is facing a backlash from various fronts like government scrutiny, a ban of Cryptocurrency ads by tech giants Google, Facebook & Twitter, and investors losing million dollars in scams on regular basis.

On the other hand, the CEO of crypto wallet startup Abra, Bill Barhydt predicted this slump as a temporary ripple in the market, as told to Business Insider at the beginning of this year. He believes that the market will progress the North way once that the institutional money comes in. The volatility in the crypto market offers enough big opportunities for hedge funds, high net worth individuals, even commodity speculators.