Dark Clouds for Apple in China Aren’t Fading Any Soon

It seems China is quite adamant on making Apple struggle like never before. No matter how much Apple CEO tries to impress by making huge investments in Chinese business, visiting government officials, or using the word “China” throughout WWDC 2016, China is in no mood to return the favor. Apple in China was forced to disable Apple News, online stores for books and movies were forced to close, and iPhone sales were pushed to the biggest low ever recorded in China for iPhone. The iPhone woes do not end here. Recently, China suspended the sale of iPhone 6 in its local market. Such issues have raised serious concerns over Apple Inc.’s growth momentum in China considering the country is responsible for generating seconding largest revenue for the company in the world.

Struggle Is About To Increase for Apple in China 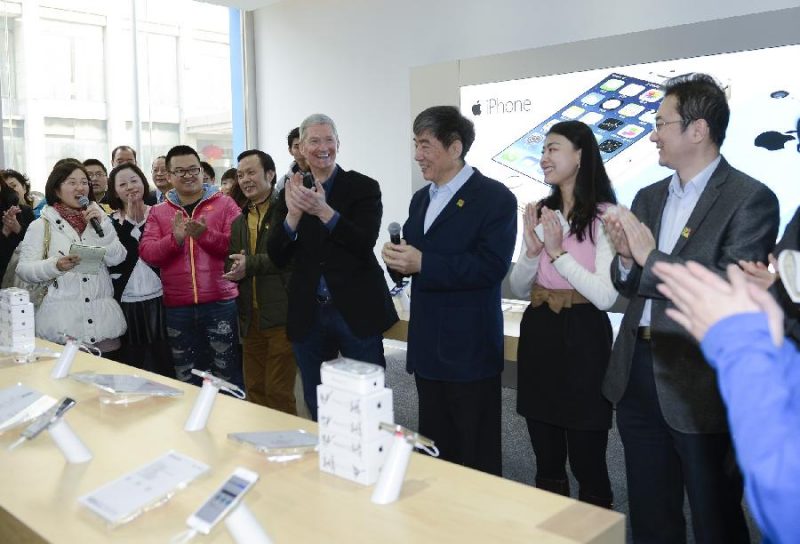 Image: Apple CEO Tim Cook At The Launch of 4G iPhone in Beijing

Apple Inc. lost a considerable amount of share in the Chinese smartphone market. This arrived as a result of iPhone sales decline during May. A recent data from Counterpoint Research suggests that slow iPhone sales in China have pushed Apple to fifth place in the smartphone market of China. This is the biggest shock for Apple as it used to be China’s one of the most favorite Western baby. Apple now lags behind local Chinese brands like Xiaomi, Oppo, Huawei, and Vivo with Xiaomi being one of the fiercest competitors for Apple after Samsung in the Asian market.

Exactly a year ago, Apple shares were down by 12 percent and at present the count is 10.8 percent. This arrived in May as Huawei continued thriving in the Chinese market by 17.3 percent market lead, and Oppo’s shares doubled to 11 percent. The top four local Chinese brands, Xiaomi, Vivo, Huawei, and Oppo have combined to rule 53 percent of total market share in China.

During the earnings report in April, the iOS giant reported a massive 26 percent year-after-year revenue drop in China due to slow iPhone sales. Meanwhile, the revenue of Apple’s Asia Pacific dropped by 25 percent year-after-year in the initial three months of 2016. Apple Inc. cited currency weakness and significant channel reduction to be the reasons behind shocking iPhone sales decline. During the earnings call, Tim Cook claimed that Apple in China was up against a robust year-ago market growth.

Major Drop is a Huge Blow To Apple

The shift to the fifth position has made Apple lose its hold in its largest overseas market. This is yet again another blow to Apple from China following the order to pull off the iPhone 6 models from sale in China. The company has appealed the decision taken by the Beijing Intellectual Property Office, but until then the sales have been ceased in China. Apple was accused by a local Chinese handset maker for violating its design patent and using it for iPhone 6.

China is a very important market for Apple’s economy. No wonder why Tim Cook never shies away from expressing his fondness for the country. After all, China is one of the chief sources of revenue for Apple. Apple Inc., at present, is combating slow domestic sales in the Chinese market due to the increase in a number of local vendors with popular locally manufactured devices. You can consider Xiaomi, for instance. In an effort to fight with local, low-cost devices, Apple released a cheaper version of iPhone – iPhone SE, in China to re-boost its popularity in the country as well as other developing market, but the plan didn’t work out as expected.

For now, all we can do is wait and watch until Apple in China makes a comeback in the local market. Apple iPhone 7 series, though, it won’t arrive with a major upgrade, is touted as one of the biggest money spinners for Apple. Let’s hope the handset performs a great business and become responsible for bringing the company back in a game like Samsung S7 did for Samsung.