A couple of things you wish you knew before firing up Darkest Dungeon 2.

Darkest Dungeon 2 is arguably one of the most anticipated games of 2021. The game that has been taking the RPG world by storm is finally here, and it’s better than ever! Darkest Dungeon 2 brings in all the original features of the first game but much more content to explore.

The core fundamentals that attracted so much attention and kept gamers glued, making the first release enjoyable, have been retained by the Darkest Dungeon 2. The zoom shots on hits were dramatically satisfying, and the clear narration that surprisingly describes the actions was also deeply satisfying. Being in a party that matches up to their role-based format gives different encounters more required balance. In the D.D 1, I was caught up in un-relatable parties where other members died or stayed behind but here, it is not a problem as I am allowed to make use of that time to find exciting combos that would strengthen my party and give me an edge over the enemies’ party. 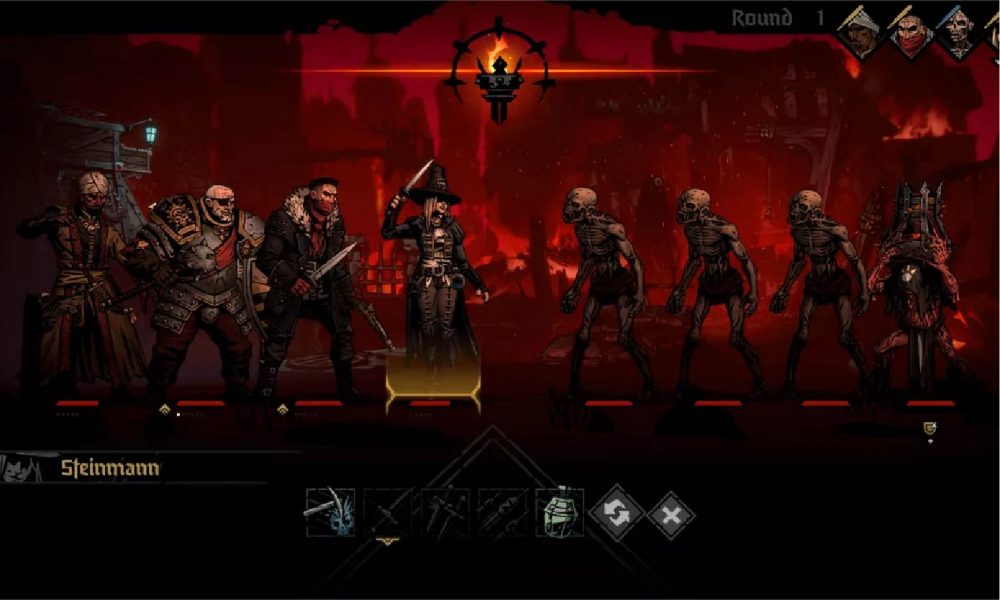 Whether they be gunslingers from the bleached-white sands or demonic acolytes from a nameless dungeon, these champions have been imbued with powers both ancient and infernal. The time has come to test their mettle against one another. The sequel, by contrast, takes a different approach. While the original game allowed you to upgrade individual characters through experience and equipment for each of them, in Darkest Dungeon II, your main (and only) character’s level remains static. It is only improved with time and resources spent on the character.

For those of you who are aware of this, take your mind back to Slay the Spire but with perturbed misfits instead of a deck of cards. That may sound reductive like I’m downplaying the game’s structural distinctions to make an easy comparison. I assure you that I am not.

Speaking of guild-houses, there isn’t any. All the management mechanics of the original have been taken down to ensure the move toward a reprobate format. That, in many ways, is discouraging. There is yet another game quite like Darkest Dungeon for its blend of combat and asset, exploration, management, and so much more, especially within its exciting gnarled horror gothic setting. But the move to a reprobate system has allowed Red Hook to focus more on making combat, item management, and stress alongside exciting party dynamics more accessible and effective within the proposed time limits and increasingly harder enemy encounters.

This is a pretty neat feature in Darkest Dungeon 2 that you should know about! Your hero can inherit certain traits of your ancestors, which gives them a powerful boost. By default, only the first four heroes in your roster will be able to get this trait passed down to them.

In Darkest Dungeon 2, you are charged with taking the last flame of hope through a sequence of grizzly paths upward to a mountain top, where a great evil needs to be taken out.

The differences between the original and its sequel become known early on when you are charged with choosing your party. Unlike the first game, where a host of different adventurers were met who would form a larger party, for every attempt in Darkest Dungeon 2, you get to pick a completely new set of adventurers based on each class.

Darkest Dungeon 2, even in its Early Access state, is an exciting reprobate game that offers players a host of avenues with which to go at the game’s various encounters.

Darkest Dungeon 2 Review: What you see is what you get