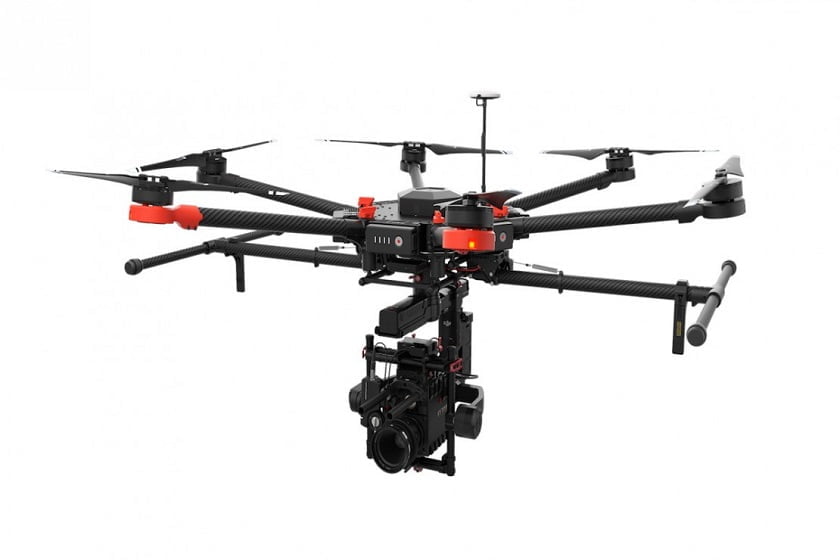 DJI, one of the biggest names in the drone market launched its next-generation aerial platform on Sunday. The Matrice 600 drone is equipped for professional aerial photography, filmmaking, and industrial applications.

The aerial platform consolidates with the new A3 flight controller onboard and sports the latest Lightbridge 2 video-transmission technology that provides high frame rates and HD live-streaming capability at distances up to five kilometers.

It’s a six-rotor system that can carry a payload of up to 6 kilograms and can fly up to 36 minutes when paired with DJI’s proprietary Zenmuse X5 cameras. The flight time drops to 16 minutes if attached with other cinema-quality cameras like the Red Epic or the Arri Alexa. The timings will vary for different cameras, gimbals, and several other conditions. Based on the kind of payload the system is carrying, it can also fly the Ronin MX, the company’s latest handheld, and aerial three-axis gimbal.

The device propulsion system is dustproof to reduce maintenance and enhance durability. The motors are actively cooled for more-secure flight, and its landing gear can be withdrawn for full 360-degree, clear imaging.

The unmanned aerial vehicle is backed by six DJI Intelligent Batteries. The power distribution board and the customized battery-management system enable all six batteries to turn on and off with the push of one button and keep the system skyward, in case of a single battery failure.

The device is a high quality development platform in tune with the company’s Onboard Software Development Kit and Mobile SDK to work with various industrial applications. It features a double parallel CAN and API ports for connecting devices, including the Guidance sensor system, RTK GPS units or third-party components.

The retail price of the M600 is $4,599, which includes integrated A3 flight controller with Lightbridge 2 and a full set of batteries.

The M600, when integrated with new DJI Ronin-MX offers best-in-class three-axis aerial video stabilization. The Ronin line’s latest offering is most adaptable, working both on the ground and in the air with the basic setup.

The Ronin-MX is consistent with a range of accessories for aperture control and long-distance focus and sports remote start/stop controls and video transmission. It is created for convenient, handheld use, but it also has several operation modes, including underslung, upright and briefcase.

The device has an inbuilt, independent IMU module, a 2.4GHz receiver, and a Bluetooth module. It operates through the company’s GO app and has settings for SmoothTrack and gimbal-tuning for different cameras, like some of the RED series, DSLRs, and other professional camera. It also operates in a number of modes, including car and aerial mount.

Under the hood, the Ronin-MX is powered by a 4S Ronin-M battery. Third-party cameras on the Ronin MX can be powered by an optional onboard DJI battery. Its improved and powerful motors allow it to carry a maximum payload of up to 4.5 kilograms. The device is compatible with an array of cameras from Arri, Black Magic, Canon, Panasonic, RED, Sony and Nikon.

Incredible Shape-Shifting Technology Where Your Surrounding is the Interface