A Wall Street Journal piece published five years ago enamored of mirrors that double as computers. These smart mirrors come equipped with myriad sensors, cameras and a touchscreen display built right into the reflective surface. Now, the idea of smart mirrors sounds either very silly and is bound to lead to oft-repeated Snow White jokes that will wear thin in no time! The truth is, the touchscreen computer mirror is real, and it’s coming soon and it’s actually pretty useful – as long as you’re willing to let it see you naked!

Duo is a part mirror, all computer AI device that operates from beyond the reflective surface. Unlike the elusive standalone speaker Google Assistant, Duo the AI computer looks and works like a simple mirror. Its 27” reflective display effectively hides a smart computer that lets you connect your smart home devices. One can also use the slew of features from the all-purpose entertainment hub.

The touch-sensitive AI computer lets you reach into your reflection to control the screen. Much akin to Iron Man’s JARVIS, Albert the AI companion that lives inside Duo, lets you control your smart home devices with your voice. You can personalize the name, gender, accent, and humor of the AI assistant.

Albert operates from within the 1.9mm thin stealthy casing packed with core electronics. The mirror computer weighs in at eight pounds, so one can easily mount the 27-inch 1080p display on any wall. On top of that, it’s designed to effortlessly blend into any environment when not in use.

Duo, the AI computer is powered by an on-board processor. It allows you to play music, check the news, stream videos, play games, or display various lights to compliment your interior. In addition, the mirror computer also supports a wide range of individual apps via its own custom OS, HomeOS.

The Duo team has even developed a web-based HomeOS SDK for developers to build their own apps to be used on the platform. 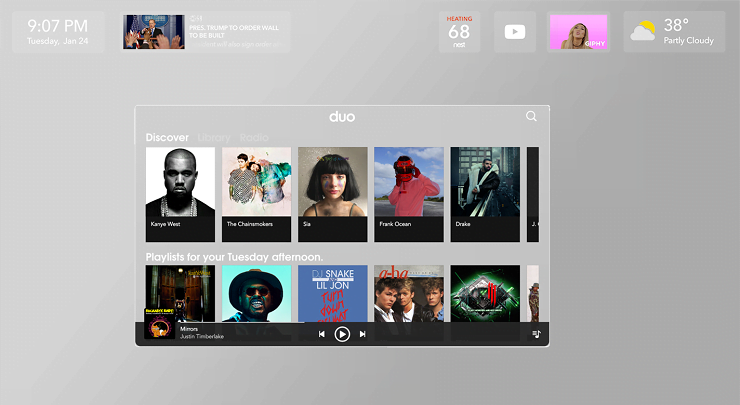 The AI computer is developed by Duo, an AI company founded by Jack Kim who recently launched Ember Labs, a personal laboratory dedicated to supporting innovative software and hardware businesses.

You can pre-order Duo AI computer at an early bird price of $399, which is $200 off the final recommended retail price. The Duo team is aiming to ship the product in October 2017. Developers can receive a pre-production Duo in June 2017.

You can watch the video below to see it in action: