Eero Pro 6 and Eero Pro: Which Router Should You Invest in And Why?

Eero Pro 6: It is the fastest Eero ever made, and the speed is efficiently at par with other routers that come at its price value. The AX4200 tri-band Wi-Fi feature makes this router a perfect choice for people who want to make efficient use of their gigabit internet connection. The Eero Pro 6 is also one of the most compact Wi-Fi 6 routers available at this speed.

Eero Pro: It is a robust router despite the lower speed rate. Its tri-band Wi-Fi feature is excellent for consistent performance and can give efficient speeds for an internet connection up to 550Mbps. The router is significantly compact than the Wi-Fi 6 variant, making it easier to conceal it tightly in a room.

The Eero Pro 6 and the Eero Pro routers form the base for a robust and efficient reliable mesh system. The routers have identical software features and compatibility meters. However, the Eero Pro 6 is a power-up in terms of speed and coverage because of its slightly taller size and a more updated Wi-Fi 6 setup. The router is available at $30 and is more than the earlier Eero Pro. It is efficient for upgrading to an internet connection that has speed levels faster than 500Mbps.

In terms of looks, both the Eero Pro and Eero Pro 6 are identical, though there are several vital upgrades on the Pro 6 router. The first update is the Wi-Fi 6 integration, also known as 8082.11ax. This integration can immediately deliver on speed upgrades across compatible devices. 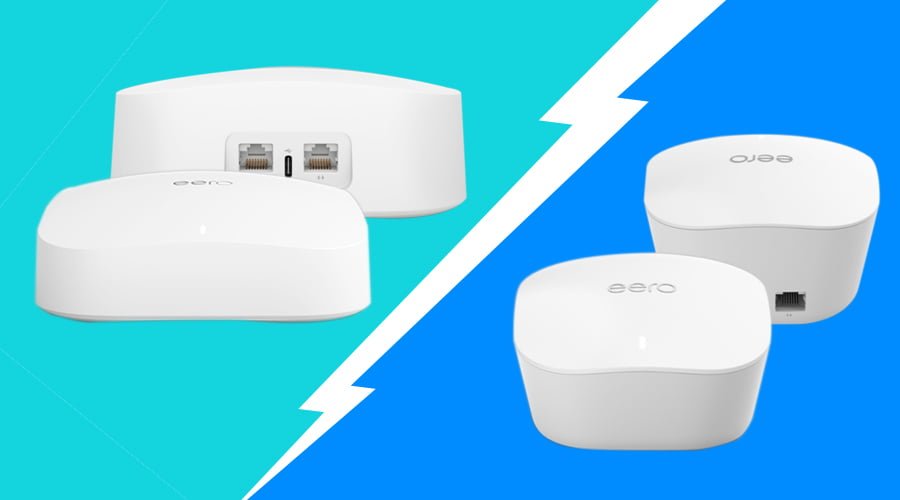 According to Eero, the older Eero Pro can cover around 1,750 square feet in a single unit, while the newer Eero Pro 6 covers 2,000 square feet in a single unit. However, the extra coverage and performance value of the Eero Pro 6 arrives with a size penalty as the housing structure is significantly taller. Both routers are compact in comparison to the earlier best mesh routers in their class.

Both the Eero pro 6 and the Eero Pro can run the full suite of Eero software, like Alexa integration and simple device management located in the Eero app. Users can also check the traffic and internet usage rate and enable/ disable each device’s disabled access. The Eero routers support current configurations like WPA3 security and IPv6. These routers also support the Port forwarding feature.

Users can also sign up for Eero Secure and Eero Secure+ through the routers. The former package includes a basic set of security features, content filter, ad blocking, as well as a device monitor for $2.99 per month, and the Eero Secure+ package adds antivirus software, a password manager, and a VPN subscription for $9.99 per month.

To get the best internet speeds, one should make sure the rest available Eeros in the mesh, support the speeds they expect from a router. To achieve gigabit mesh speeds from the Eero Pro 6 router, they should get Eero Pro 6 nodes. If the person has older Eero nodes, they can use any Eero to expand the network.