Euro Pro 6 and Netgear nighthawk mk62: Which one is more efficient?

The Eero 6 is the third generation router with enhanced mesh speeds through a faster Wi-Fi 6 connection. The faster wireless tech tool allows the Eero 6 mesh to support up to 500Mbps data speed and boost Wi-Fi 5 devices’ performance.

The Netgear Nighthawk MK62 is the first compact Wi-Fi 6 router system and gives enhanced data speeds. This router is the best tool for compact housing where users look for additional support for Wi-Fi 6 connection.

The two Wi-Fi systems are quite similar in terms of specifications- both of them have AX1800 Wi-Fi 6 data speeds with around 1,500 square feet of coverage in every node. However, the Eero 6 leads the way with new features like Zigbee smart home hub and Amazon Alexa support. Both these systems are efficient in use for most people. 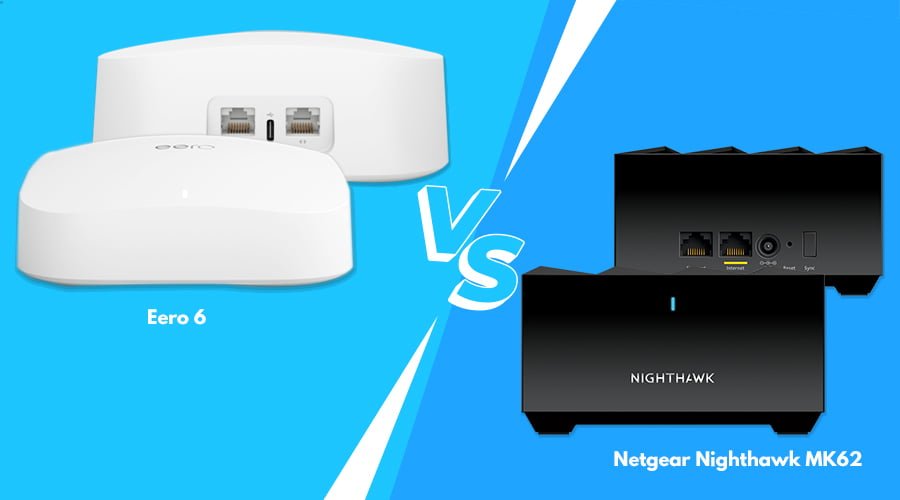 Both the WI-Fi routers give AX1800 speeds with a dual-band Wi-Fi 6 setup. Eero reports 574Mbps and 1,201Mbps, but one can get similar speeds with any of the routers. Additionally, both the router support MU-MIMO, parallel data speed streams, and easily suit an internet connection of up to 500Mbps.

Both the routers are compact with similar heights, though the Eero is an inch smaller. The Nightwalk at 4.8 inches square can be easily placed in the house. Both the Nighthawk based Wi-Fi router and the Eero 6 router have two Ethernet ports located towards the back, with one of the ports dedicated to the connection. The extenders of Eero 6 don’t have any Ethernet ports, while the Nighthawk’s satellites have one. The Eero 6 router can also be expanded with any other Eero router. One can add a similar Eero 6 router to the mix with both the Ethernet ports open to various devices. 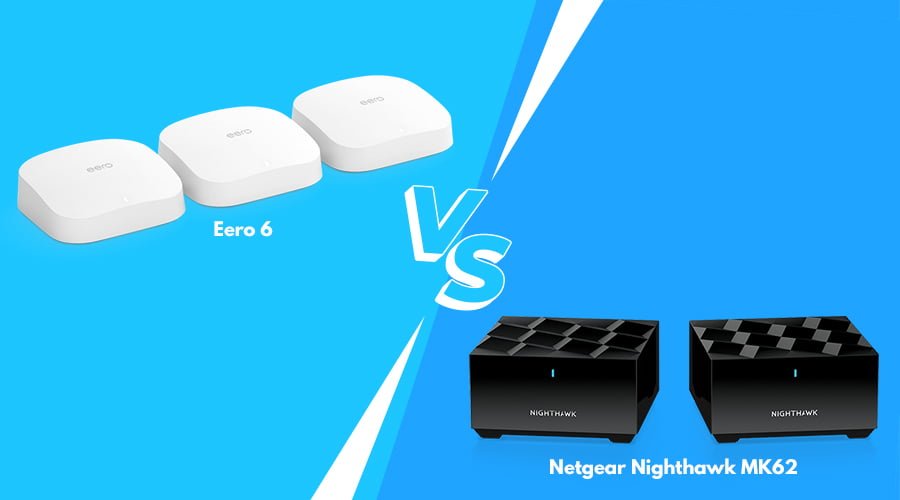 One of the distinctive features of the Eero 6 is its backward compatibility with other Eero products. One can easily use an older Eero router with the present one to expand the Eero 6 mesh network. The regular software updates of the Eero 6 enables this feature. According to Eero, each Eero 6 or Eero 6 Extender can cover up to 1,500 square feet speeds in a mesh. Eero’s introduction of a Zigbee smart home hub in the router is also a great addition to quickly reducing the complexity of any home network. Additionally, Alexa integration also helps to get devices connected quickly and efficiently.

Like Eero 6, Netgear also stated that the router (MR60) and satellite (MS60), both of the MK62 Wi-Fi systems, can offer up to 1,500 square feet coverage. However, unlike Eero, the coverage expansion options will be restricted with Netgear as it cannot be expanded with any other network or tool.

The Nighthawk MK62 gives a year of Netgear Armor access, and an annual subscription costs $69.99. This plan comes with proper antivirus protection from Bitdefender and access to an exclusive VPN service with an additional 200MB of data every day.

Eero Pro 6 and Eero Pro: Which Router Should You Invest in And Why?