Evapolar : A desktop A.C for all your summer needs!

The first personal, portable air conditioner of the world, the Evapolar is made for a desktop setting. It is based on the principle of water evaporation.

In crowded places like offices or educational institutions, summers take a toll on everyone present. At times, the air conditioner present does not provide enough cooling. But now, there is a solution which would enable one to enjoy proper cooling, despite the heat outside. Russian entrepreneurs Eugene Dubovoy and Vladimir Levitin have brought in the market a portable air conditioner called “Evapolar”. The Evapolar works on the principle of water evaporation from where the derivation of this name has taken place.

Cooling through water evaporation is the simplest and most efficient cooling technology since ancient times. Dubbed as the first personal, portable air conditioner of the world, the Evapolar is made for a desktop setting. This is an easy-to-use device which humidifies the dry air producing a cool, ocean breeze.

How is Evapolar better than traditional air coolers?

Unlike other traditional air conditioners, Evapolar isn’t based on refrigeration. Instead of using toxic chemicals it uses evaporative cooling, which means it is more eco-friendly than the traditional air conditioners. One has to add water to the device which will evaporate in order to make the air feel cooler. It moonlights as a humidifier as well.

The Evapolar conditions the air by adding water to it. Although there are other such air coolers on the basis of water evaporating, they aren’t as efficient as the Evapolar. The difference between them and the Evapolar is that this is much more effective in a portable manner. The kind of cooling this desktop air conditioner provides is way better than those bulky air coolers. It is also 15 times more energy efficient than other air cooling systems. 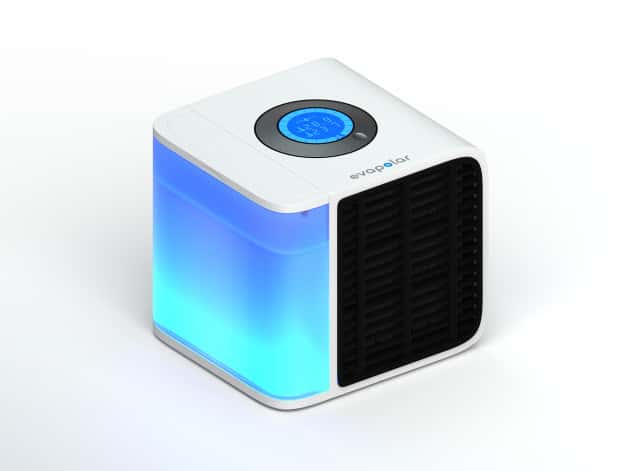 The efficiency of Evapolar as a portable device

Evapolar uses a patented filter and a refillable water container to push out cool air with a small fan. This air is also in a purified form due to the evaporative technique in use. As Evapolar works by humidifying and filtering the air around it, experts believe that it is more useful in drier, arid environments. In humid areas, it probably won’t be as effective as the drier areas. Despite this speculation, the creators of Evapolar claim that they have tested it in humid environment as well.

Though the range of the Evapolar is small, it is fairly efficient in fulfilling the purpose of a desktop air conditioner. It might not be able to replace room air conditioners but it cools the area around its placement. As it’s based on the evaporative cooling technique, it produces a soft chilling process which seems natural. This helps the user in not catching a cold because it does not produce a cold air thread.

In the process of water evaporation, the key element is a specially developed evaporative nanomaterial based on basalt fibres. This material absorbs huge amounts of water and ensures extremely intensive evaporation even from a small surface. Due to these unique characteristics of this material, the size of this device has been significantly less making it one-tenth the size of a conventional air conditioner. The power consumed by the Evapolar is 100W-350W whereas a normal window A.C requires 5,000 to 8,000 BTU or more. Hence it is definitely energy efficient. This Evapolar portable air conditioner is available on the Indiegogo website for $179.