So it seems, following the not-so-long-ago account hack of the Facebook CEO Mark Zuckerberg, the group of hackers ‘OurMine’ is back to business yet again. This time, Google CEO Sundar Pichai has arrived on the team’s central target. The popular hackers temporarily accessed Google CEO’s Quora account today.

The team posted a message from the account of Google CEO Sundar Pichai that read,

Followed by the second one, which read,

The team not only hacked and posted messages on the account of Google CEO, but they also followed their own banned account – OurMine Team, from Pichai’s account. The hacked Quora account of Pichai was connected to the Twitter due to which over 508, 000 Twitter followers were notified of the hack. Within a few hours of the hack, the Twitter account of Google CEO Sundar Pichai was wiped off of all the messages posted by the group of hackers – OurMine.

Recently, the same hacker group arrived in the spotlight for gaining temporary access to Twitter and Pinterest accounts of Mark Zuckerberg. It’s obvious that Facebook CEO needs to keep a tab on other websites so one can find his account on platforms such as LinkedIn, Twitter, Pinterest, etc., but it seems he isn’t much concerned regarding the security of these accounts, or at least the OurMine group of hackers think so. The group of hackers claimed that the recent data breach of LinkedIn facilitated them to the password of Zuckerberg’s Linkedin account. The password was, as claimed by hackers, “dadada”.

In a similar manner to what happened with Google CEO’s quora account today, Zuckerberg’s cross posting was on, which led to messages being automatically posted to Twitter. The microblogging website was reportedly quick enough to react to such activity by suspending the account of Zuckerberg on Twitter. The offending tweets were immediately discarded by the team. The Facebook CEO’s account has been registered on Twitter since 2012, but he has never used the platform once.

The hacking methods for both Google CEO Sundar Pichai and Facebook CEO Mark Zuckerberg were different. The team had found Zuckerberg’s login credentials from LinkedIn’s password dump. Apparently, the hackers addressed they’ve exploited Quora’s vulnerability, which the company is yet to fix. 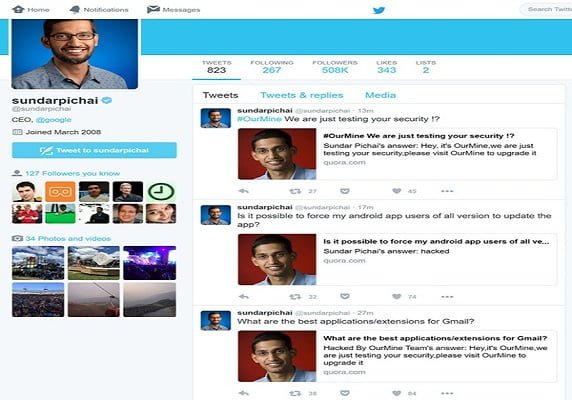 The OurMine team of hackers is apparently different than other high-profile hackers. Rather than misusing the hacked account, they simply write ‘TESTING SECURITY’ meanwhile advising the targeted user to contact the team to ‘UPGRADE IT’. These hackers serve regular individuals as well, for instance, scanning social media accounts, minor or major vulnerabilities, and site security holes. For this work, they charge approximately $5,000.

As of now, the Twitter page of Google CEO Sundar Pichai has been cleared. There are no traces of Quora posts, however, Quora users are absolutely baffled by such erratic conduct. This has led to an activity, which questions whereabouts of Pichai’s Quora account.