Everything about Fujifilm new X series mirrorless camera is Ingenious

The Japanese imaging company, Fujifilm today announced X-T3, the successor to its most popular camera X-T2 launched in 2016. Fujifilm X-T3 is a mirrorless camera with all–new APS-C sensor of 26.1 Effective megapixels. It will be available in the market from September 20, 2018, at a starting price of $1,500.

X-T3 is the most advanced video recording camera added to the company’s X series family, famous for high color reproducibility. It is powered by Quad-Core X Processor 4, which processes three times faster than that of the entire Fujifilm product line up.

What’s more, X-T3 is the first APS-C sensor digital camera to shoot 4k videos at a rate of 60 frames per second and that too with 10-bit color. 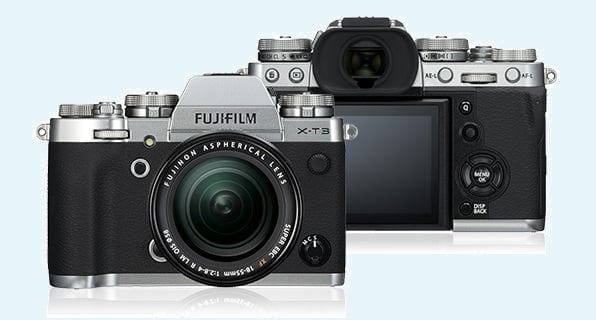 At the core, the fourth-gen Fujifilm X series mirrorless camera is a backside illuminated (BSI) X-Trans CMOS 4 and a new low ISO base of 160 extended up to 12800. In simple words, the phase detection pixels and the autofocus capacity of Fujifilm X-T3 have significantly improved as compared to the earlier devices.

The combination of superior auto-focus system and 2.16 MP sensor on X-T3 can bring the focus down to -3 EV in low lights while its predecessor was restricted up to -1 EV.

Another salient feature in the Fujifilm X-T3 which will be most loved by professional videographers is its ability to shoot constantly at 11fps with the manual shutter. One can also use an electronic shutter while capturing videos at 30 fps but that will crop the scene by 1.25 times.

Achieving resolution as high as 3.69 million dots with 0.75x magnification, the electronic viewfinder on Fujifilm X-T3 is way sharper that X-T2 with 2.36 million dots and 0.62x magnification. The system operates at a refresh rate of 100fps and the display time lag is only 0.005 seconds. This set of configuration will facilitate video recorders to accurately identify the location of the subject in motion.

Bluetooth and Wi-Fi connectivity comes as standard on the new member of the Fujifilm X series family, whereas it has slots for inserting two microSD cards.

One of the biggest drawbacks of X-T2 digital camera was it lacked a slot for the headphone jack. So it was difficult for photographers to monitor background audio while recording videos.

Fujifilm addressed this issue this time and integrated a headphone jack on the compact body of its latest X-T3 mirrorless camera. Furthermore, unlike X-T2, the new camera gets a rear LCD touchscreen. However, the screen can turn in three directions only (up, down and right) and hence capturing selfies on this new digital camera is still not possible.

The battery life in the new X series mirrorless Fujifilm camera has also boosted to approximately 390 shots on a single charge from 340 shots on X-T2.