Before now, Facebook had dominated the social landscape the most frequently used and popular social media platform among youths in America –that’s no longer the case now, according to recent studies. A survey released by Pew Research Center on Thursday show that 51% of U.S. teenagers (ages 13 to 17) now use Facebook, making it the fourth most frequently used social media platform, after YouTube, Instagram and Snapchat.

The survey, which is the research team’s first since 2015 indicates a shift in teens’ social media use based on how young people’s technology landscape has evolved. Smartphone access is nearly ubiquitous among teens: 95% of the survey respondents acknowledged having access to a smartphone and almost half (45%) said they are online ‘almost constantly. Only a few, mostly among the low-income families, had desktops and laptops.

Visual contents and ease of use have been suggested as the common attribute driving a large group of teens to the top three social media apps: YouTube leading the landscape with 85% of the respondents saying they use it, Instagram with 72%, and Snapchat at 69%. Could that really be the cause?

However, it’s important to note that Pew’s survey in 2015 did not include YouTube and Reddit as options, but was included in the 2018 survey. Also, respondents were asked to categorically state whether they use each of the platforms or not in the previous survey. This current survey only allowed the participants to select the platforms they use. 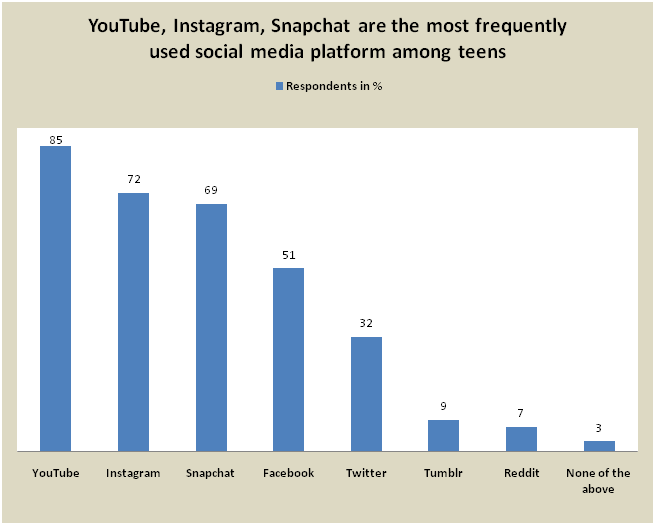 Parameters acquired from the survey may not be used to ascertain why America’s youth are ditching Facebook, a platform very popular among them just three years ago. TechCrunch slightly attributed the shift to hardware and data requirements which are no longer barriers to accessing any of the top three social media platforms. A reaction to the survey report from an anonymous youth suggests that teens are seeking for a platform their parents or guardians are not participating. YouTube, Instagram and Snapchat are categorically more youthful compared to the popular Facebook where adults and older Americans fully participate. Any survey comprising a wider age spectrum would reveal more on this shift.

Male teens still dominate in gaming, but the teen girls are closing the gap gradually. The report shows that eight-in-ten teen girls (83%) play video games whereas the male teens recorded 92%.

Generally, teens have mixed views on the impact of social media on people their age. 45% gave neither positive nor negative effect. 31% took a positive view which includes entrainment and upbeat, improved self-expression, connecting with friends and family, support and more. 24% of the teens said its negative, most of them saying it’s a source of bullying/spreading fake news, distraction and addiction and makes it hard for them to socialize in real life.