The Fitbit Charge 5 combines the greatest features of Fitbit's current smartwatches into a smaller package for a lower price.

The Fitbit Charge 5 is a smartwatch that offers several features such as sleep tracking, heart rate monitoring, GPS tracking, and much more. The Fitbit charge five battery life also comes packed as you are assured of long-lasting power. This device has been designed to provide fitness enthusiasts with a convenient way to track their daily activities.

This wearable device comes with various features that allow you to monitor your health and stay fit.  In this Fitbit charge 5 review, we’ll go over some of the unique specs of this smartwatch to aid your buying decision.

Fitbit Charge 5: What’s In The Box

When you receive your Fitbit Charge 5, a few items will be included in the box. You’ll find the following accessories inside:

As far as Fitbit Charge 5 design changes go, its two times brighter OLED screen is most noticeable. Fitbit has now turned the AMOLED display into a touchscreen to be used even in bright sunshine. Double-tapping the home screen brings you back to it after navigating the tracker by scrolling to the right from the home screen. Touch screen controls all operations on the tracker save for two side panels that hold the EDA and ECG detectors (the latter of which will be added later). 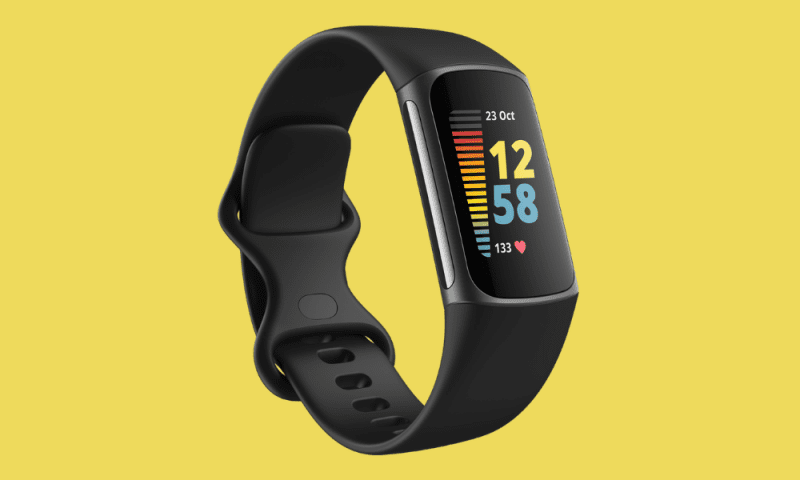 The Charge 5’s activity monitoring numbers are identical to those of the Charge 4’s.

EDA scans, timers, and alerts from your smartphone can all be accessed from the main screen by scrolling right. Fitbit has included an EDA sensor for the first time, which assesses the body’s response to stress through variations in sweat gland activity. To the (maybe unexpected) findings that 40% of adults will report feeling a lot of pressure, Fitbit says this is their solution. We were excited to see EDA come to Fitbit’s lower-priced devices when Fitbit originally introduced the feature with the Fitbit Sense last autumn.

Using the same pulse oximeter detector seen in the Charge 4 and Charge 3,  the Fitbit Charge 5 can help you better understand your sleeping habits. It features all of Fitbit’s regular sleep tracking data however you can only see your total sleep time and the sleep score from the previous night when using the tracker itself. As a Premium member, the Fitbit app will provide information on your sleep quality and stages of the night. Still, you’ll also get additional information, such as how many hours of deep sleep and how many hours of light sleep you experience each night.

Snore and noise detection will not be available on the Fitbit Charge 5 due to a lack of a microphone, despite Fitbit’s announcement of the feature at the time of its release.

The Charge 5’s activity monitoring numbers are identical to those of the Charge 4’s. There are currently just six sports profiles that can be viewed on the Fitbit charge 5 tracker device, and the Fitbit app allows you to change these. The sharper display and the always-on feature make it simpler to read when on the go or while doing burpees for activity monitoring.

You can receive pace alerts every mile while jogging or cycling with auto laps enabled. Like the Charge 4, this feature isn’t available in all sports activity profiles. These are, by default, turned off, which I didn’t realize until my first run with the tracker.

As of September 27, 2021, the Fitbit Charge 5 is now available for purchase. A six-month membership is included in the $179.95 price of the Fitbit Charge 5. Black/Graphite and Lunar White/Gold are the three color options. Steel Blue/Platinum is the standard color. The Fitbit Charge 5 comes with a complimentary six-month Fitbit Premium subscription, which gives you access to a Health Metrics dashboard, instructional audio, and video workouts.

The Fitbit Charge 5 is a considerable improvement over the previous generation and Fitbit’s best fitness tracker yet, thanks to its often color touch screen, sportier design, and new health-monitoring features.