The new strategy video game is much more than a society survival game as it raises the right questions regarding climate crisis.

The first announcement trailer of Floodland was dropped barely a month ago and it has gone viral. There are strong speculations that this new strategy video game might turn out to be a smash-hit soon after its global release, which is slated to happen next month. The Floodland announcement trailer shows that it is set in a post-apocalyptic world, which has been shattered by a gigantic flood, much like the one which wiped away the Indus Valley civilization thousands of years ago. The primary challenge in this society survival game remains to be, managing to rebuild the lost world right from the ruins. Ever since the Floodland release date was announced, the global gaming community has almost gone crazy and within weeks of its release, the Floodland announcement trailer has already become viral.

This is indeed a hard nut to crack as you can’t commit the same mistakes done by the mere mortals which brought down the catastrophe. Let’s explore the murky waters of Floodland to unravel what’s on offer. 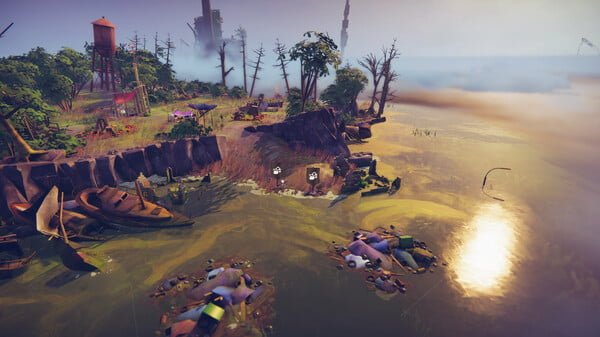 Floodland would be extremely significant as it’s believed to fuel up the endless efforts to combat climate crisis, by popularizing consciousness among children and young adults. [Image Credit: Steam]

Floodland: The Flood We Catapulted

The game begins with the erstwhile ‘civilized’ world being decimated to ruins. Sea level has experienced a huge surge across the globe and barring a few newly-formed islands, everything is under water. ‘Floodland Announcement Trailer’, which was unveiled almost a month ago, shows that sheer greed on the part of human beings, has resulted in this apocalypse. We can blame only ourselves as Floodland highlights in the official trailer that fear replaced greed in the end, but it was too late.

The Onus Is on You

Developed by Vile Monarch and published by Ravenscourt, Floodland’s post-apocalyptic world makes you take the center stage. You are entrusted with the responsibility to guide the survivors of the climate catastrophe in a Herculean journey that seems like a redemption song. There are factions which can start fighting among themselves, adding to the woes and washing away the chances of a revival of the society, revival of the human civilization.

There’s another interesting aspect to the rebuilding saga. You can actually choose the manner in which the society would be ruled. It could be a society where equality of all sorts, is celebrated or a society which upholds a dictatorial regime. But remember, later on you have to pay for the consequences of the choices you make. 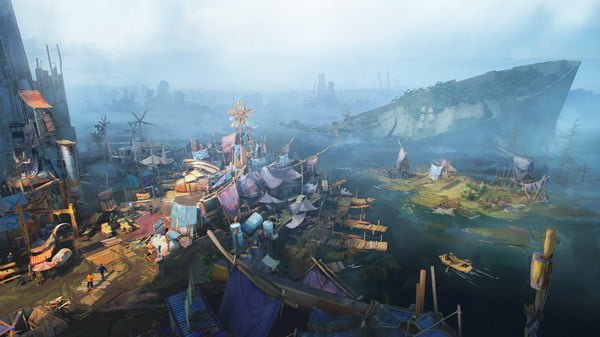 Rome Wasn’t Built in a Day

Floodland is undoubtedly a unique society survival game, which isn’t anyway a cakewalk. You have to get past an array of hurdles to rekindle the hope of human civilization which is leaning dangerously. With so much at stake, you have to step very cautiously. Never forget that destruction happens in no time but it takes much longer to create something. And when it comes to rebuilding, it takes way longer than the creation in the first place.

In order to seamlessly run this society survival game on your gaming device, you must ensure the following Floodland system requirements: 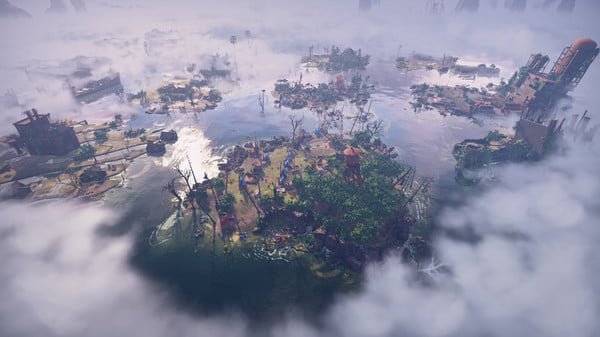 To the utter delight of gamers, Floodland will be playable on Valve’s all-new Steam Deck too. [Image Credit: Steam]

Floodland: Much More Than a Mere Game

At a time, when there’s a hue and cry at every nook and corner of the world about the adverse effects of climate change, Floodland’s arrival is a blessing in disguise. It’s believed to illuminate teenagers and young adults regarding the potential climate catastrophe which is knocking at the doors and the ways to keep it at bay. Both the developer Vile Monarch and publisher Ravenscourt, deserve a huge round of applause not only from the global gaming community but also from humanity in general. If you take all of these into consideration, it makes sense why the excitement is surging by leaps and bounds as we approach the Floodland release date.

The Water of Floodland Is Steaming Hot

Valve’s new Steam Deck has proved to be a hot property in the international gaming industry within months of its worldwide launch. Gamers will be on cloud nine to learn that Floodland Steam will be available for downloads right from November 15, 2022, the official Floodland release date. You can have a look at the Floodland announcement trailer to get an essence of the upcoming game.