Galaxy S22 Ultra: Unlock the Ultraedge, Move to the Galaxy

The new Galaxy S22 Ultra appears dipped in elegance and gorgeous beauty along with the next-gen smart tools.

The impeccable Galaxy S22 Ultra is simply selling like hot cakes, of late. Having made a dream debut early in the year, it has not only garnered huge sales, globally, but also has become probably the most sought after smartphone, in terms of features. Pretty recently, a huge price-drop catapulted in a renewed interest in this gem of a smartphone, which resulted in massive sales that have only surged at a skyrocketing speed.

It’s not long when Samsung went on to take the pole position in the high-end smartphone market. For years, the Suwon-headquartered company ruled this domain thanks to its elite Galaxy series. Interestingly, with the passage of time, Samsung came up with Galaxy phones in the mid-range price sector too.

Come 2022, the competition seems tougher than ever. Apple has managed to outperform Samsung and claimed the bragging rights of the high-end smartphone industry. Xiaomi, Oppo and Vivo are the other power players who have made life a bit difficult for Samsung. Sadly, Nokia, which was once regarded as a force to reckon with, has faded into oblivion. Then there’s OnePlus too, which is now challenging others with really cool devices like the OnePlus Nord Watch, apart from its highly lauded smartphone lineup.

The Samsung Galaxy S22 happens to be the company’s next-gen flagship handset, which had a hell of a journey so far, be it winning accolades or generating massive worldwide sales. There’s a lot of onus on it, as Samsung desperately tries to push its limits in the company’s bid to expand its market share in the high-end smartphone domain.

Let’s have a close look at the new Galaxy S22 Ultra, see what’s in store and analyze every detail to figure out the larger ramifications. 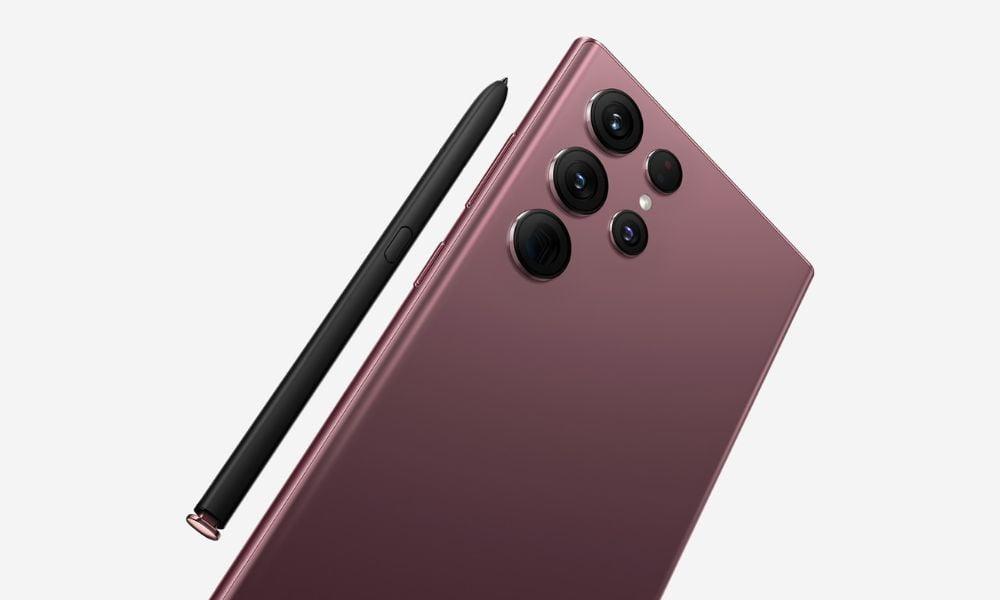 In a nutshell, the Galaxy S22 features look extremely impressive and allow the high-end smartphone from Samsung, to stand on a different pedestal altogether. Samsung claims that this flagship Android houses its ‘most advanced camera system yet’ – 40 MP Selfie Camera, 12 MP Ultra Wide Camera, 108 MP Wide-angle Camera, 10MP 10x Optical Zoom Telephoto Camera 1 and 10MP 3x Optical Zoom Telephoto Camera 2. Its out of the world Nightography tool gives it that much-needed ultra edge over others.

It comes with the enviable Pro Studio Editing tool, which further widens its gap with other high-end Android smartphones. Also, it comprises Samsung’s ‘biggest pixel sensor yet’, along with a stunning 100x Epic Zoom. The Galaxy S22 Ultra stores Samsung’s fastest processor till date, which facilitates it to deliver a jaw-dropping performance.

Samsung promises ‘beyond all-day battery life’ as the 5000mAh battery comes with 45w Super Fast Charging and Wireless PowerShare. The storage option varies from 128GB to a whopping 1TB.  Thanks to IP68, you don’t need to worry about dust or splashes of water.

You can enjoy the standout Dynamic AMOLED 2X with Vision Booster that guarantees bright displays with super smooth scrolling. It is aided by the luminous presence of unreal display stats – 1750 nits of brightness and a refresh rate of 120Hz.

The in-built S Pen is indeed an ace up its sleeve and grabs the eyeballs in the first place apart of qualifying as a great companion for artists, writers and business professionals. You will get a 6.8″ Edge Quad HD+ screen with the dimensions of 77.9 x 163.3 x 8.9mm, to go with the flow of the S Pen and your mind.

This is even more of a hard nut to crack than it sounds in the first place. Apple doesn’t highlight the features of its devices any more. Rather, the Cupertino-based tech-giant sheds light on the value add-ons that those features bring on the table.

Even though Siri is facing problems, it is way better than Samsung’s own Voice Assistant. Of late, it has surprised the entire tech-world with epoch-making innovative features like Emergency SOS service and Car Crash Detection tool.

Moreover, ‘iPhone has gone to film schools’. Today, numerous films of international repute are being shot with iPhones, something which speaks volumes about the sheer quality and unmatched performance of iPhone cameras, which are capable of giving many DSLRs a serious run for money.

However, the S Pen is indeed a striking feature and might well change the odds of the game. It can be compared to the Apple Pencil, which you can only use with your iPad. There’s so similar companion in case of the much fancied iPhones.

How Does the Equation Stand Right Now?

If we have a look at the current flagship smartphone scene, it appears to be a tug of war between Samsung and Apple, with Google, OnePlus and others trying to pose a serious challenge to them. There’s no doubt that despite the seemingly astronomical price-tags, iPhones have a dedicated fan base and enjoy a great consumer chain across the globe.

The trio of Xiaomi, Oppo and Vivo appear to be strong contenders and constantly trying to push their limits in every way possible.

Google too is constantly trying to raise the bar of its Pixel line-up and pretty recently managed to make considerable advancements through the latest Pixel Feature Drop. Its Pixel 7 Pro is trying to bridge the gap with Apple’s recent-most iPhone 14.

On the other hand, OnePlus which created sensations in recent times with the OnePlus Nord Watch, is all set to make the contest further exciting as the OnePlus 11 is going to hit the stores shortly.

The way Galaxy S22 Ultra is continuing its dream run, it might well end up helping Samsung in changing the overall dynamics of the global flagship smartphone market.

The Galaxy S Graph Is Only Going Upwards

One of the foremost features of the Galaxy Ultra series that sets it apart from the sea of smartphones out there, is indeed its stunning camera setup. The new Galaxy S22 Ultra also comes with a fascinatingly brilliant camera setup. There are strong speculations in the global market that its immediate successor, Samsung Galaxy S23 Ultra is likely to have a much more enhanced camera setup.

Moreover, a recent leak by Ice Universe has added fuel to the fire igniting high hopes around the upcoming flagship smartphone from the house of Samsung. In the reveal, there were photos of the same subject, which was a pumpkin, shot by the Galaxy S22 Ultra, the Galaxy S23 Ultra and the Pixel 7 Pro.

It became crystal clear from the end products that in terms of detailing, Samsung S23 Ultra successfully edges past Galaxy S22 Ultra, by quite a distance. But what has made us shell-shocked is the fact that Google Pixel 7 Pro, often termed as the best Android camera phone in the current scenario, was forced to bite the dust by Samsung Galaxy S23 Ultra by considerable furlongs.

It goes without saying that these days, the camera becomes a key factor while locking on a particular smartphone. Especially, when you are shelling out so much on a high-end smartphone, you would like to ensure that you do away with a DSLR. This is where Apple takes the driving seat. The fact that in recent times, many award-winning films have been shot on iPhones, gives it the brownie points on offer.

On the other hand, several leaked reports and latest rumors indicate that one of the pivotal pain points of the Samsung Galaxy S22, its battery, could experience a massive upgrade in the upcoming Galaxy S23. Therefore, it would be able to hold more ground against its close competitors iPhone 13 Pro and Google Pixel 7 Pro.

Hence, the question becomes quite pertinent – whether to buy the Galaxy S22 Ultra or wait for the Galaxy S23 Ultra to arrive in the market. Firstly, the Galaxy S23 Ultra could well become available by the end of February, 2023, or it might get delayed by another couple of months. Secondly, there would be a huge difference in price, in all likelihood. Moreover, the Samsung Galaxy S22 is currently up for grabs at a way lower price courtesy of a recent price drop.

Hence, taking everything into consideration, it would be wise to bring home the S22 Ultra. However, if you are willing to wait and the possible sky-high price-tag doesn’t burn your pocket, then you can surely opt for the Galaxy S23.

What is the price of the Galaxy S22 Ultra?

Where can I buy the Galaxy S22 Ultra?

You can place your order directly with Samsung’s official website or you can buy from popular ecommerce sites like Amazon and Best Buy.