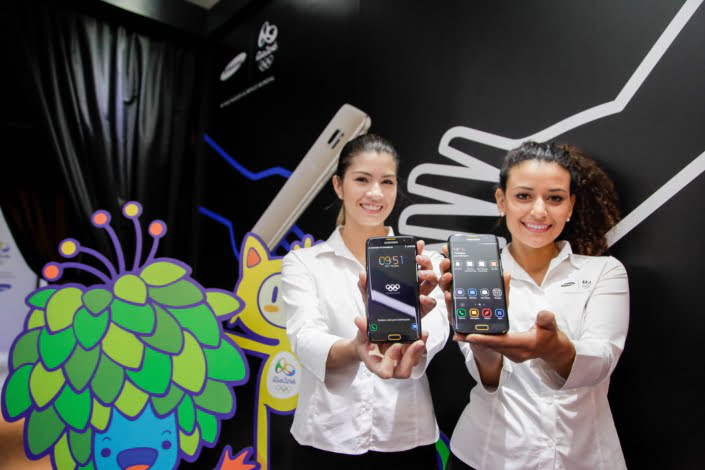 Samsung has partnered with International Olympic Committee to distribute 12,500 units of Gear IconX and Galaxy S7 Edge Olympic Games edition smartphone model to every Rio 2016 Olympian. This gesture will help them to improve their experiences in the upcoming Olympics and communicate with friends and family with more convenience.

This is happening for the first time in history when a device inspired by the games embeds design of Olympic Games on the smartphone itself. The design will feature a custom pattern, i.e. Olympic Rings’ five official colors. These colors will be prominent in the user interface of the phone, which means, lock and home screens, message, dial, and contact screens, and of course, notification bar.

The device will be pre-loaded with Rio 2016 themed wallpapers. All the athletes will receive newest accessories manufactured by Samsung for Galaxy S7 Edge Olympic Games edition model. These accessories include the Gear IconX earbuds. The IconX is cord-free and offers a great fitness experience with standalone music player and in-ear heart rate monitor. It can track fitness update via the S Health app when paired with the smartphones.

The limited edition smartphone model will be available in selected countries namely Brazil, Korea, Germany, the United States, and China from July 18th.

Samsung feels Olympic Games are a platform, which celebrates the achievement and progress of athletes. Here, fans and countries arrive together in order to unite the world. With the release of limited edition Galaxy S7 Edge inspired by Rio 2016, the electronics giant admires the spirit of Olympic players and fans across the world who consistently keep pushing boundaries for a better world.

What’s in it for Consumers?

Samsung is offering consumers and fans an opportunity to commemorate the Olympic Games by manufacturing a limited edition Galaxy S7 Edge model.

In addition to the limited edition handset, the company is also offering some other perks to celebrate Rio 2016 Olympics. These includes:

Fans can interact with the latest technology of Samsung and connect with games in Olympics at Samsung Galaxy Studios. These studios by Samsung will feature activities like enhanced VR experiences where enthusiasts can enjoy a variety of Olympic sports. At selected Samsung studios, a latest and one of its kind 4D VR will be offered where fans can enjoy the comfort of specifically designed seats in order to feel the thrilling experience of high-speed kayaking. It will feel as if they’re actually onboard.

The app developed by Samsung will offer 24/7 Olympic 2016 updates to athletes, consumers, and fans. In early August, the app will undergo an upgrade to offer the official schedule of Olympic Games, event and venue details, medal counts, and results with real-time updates. The app will be free to download. It will be available on Samsung Galaxy Apps, App Store, Google Play, Windows App Store, and selected Chinese App Stores.

Have You Grabbed The Limited Edition Galaxy S7 Edge Yet?