The Golden Age of Pill Robots

Marc Stiegler’s 1989 short story “The Gentle Seduction” maintains the idea of a technological Singularity in a rate-of-change sense, with one of the characters superimposing the idea as “a time in the future. It’ll occur when the rate of change of technology is very great – so great that the effort to keep up with the change will overwhelm us.” The heroine of the story lives in a timeline where a majority of mankind is more willing to swallow a pill to restore one’s youthful state or take a pill to boost one’s mental acuity. An unimaginative, outdoorsy woman, who is hopelessly petrified of technology, she is forced to live a technologically-impaired, forsaken life she doesn’t want. One day, the woman ends up taking a new pill robot and transmutes from a techno-neophyte to an organic intelligence. The woman stops aging as the centuries go by, she no longer needs her physical body and can choose to leave it behind and explore the universe as a type of pure mental-energy state. The ‘seducer’ is the technology itself, as the woman lives through Singularity, and is seduced by its wonder, bit by bit.

Stiegler’s interest in a post-Singularity civilization began in 1984 when he co-authored Valentina: Soul in Sapphire to cover the galloping progress of artificial intelligence, genetics, and nanotechnology. Now, three decades later, we’re approaching a moment when humanity – our bodies, our minds, our civilization – will be completely and irreversibly transformed by Singularity. It’s impossible to think about accelerating technological development and where it may be taking us, without accepting the idea of the Singularity. As it turns out, life-extension advocates, cyborgs, neuroscientists, Silicon Valley tech entrepreneurs, and transhumanists, are entirely convinced that merging technology and human beings will turn us into beings of pure and immutable thought. 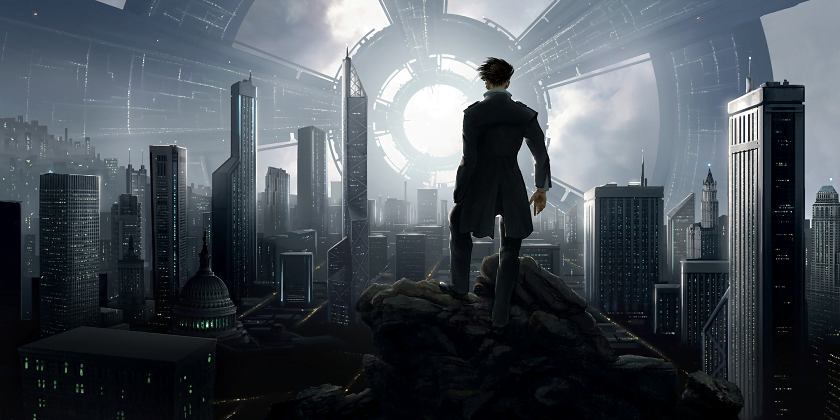 Life-extension advocates, cyborgs, neuroscientists, Silicon Valley tech entrepreneurs, and transhumanists, are entirely convinced that merging technology and human beings will turn us into beings of pure and immutable thought.

This particular techno-millenarianism of Singularity could be noted in Elon Musk’s widely reported recent comments at the World Government Summit in Dubai. In some ways, he insisted, we are already cyborgs. With all the digital tools that we have, our phone, our computer, that we can ask a question and instantly get an answer from Google and other things, we humans, already have a digital tertiary layer. In order to avoid becoming obsolete, we need some sort of merger between biological intelligence and digital intelligence. “It will be some high bandwidth connection to the brain that will help us achieve a symbiosis between our brain and artificial intelligence.”

After Singularity, the most talked-about topic is life-extension. Singularitarians see biological boundaries that most people think of as perpetual and inescapable as solvable problems. Aging is an illness. So is death, like any other, intractable illness. What do you do with illnesses? You cure them. After all, Singularity cannot be plotted on the graph without biological evolution.

The 1987 movie, Innerspace, the story of a pill-size robot equivalent that could travel through a person’s gastrointestinal tract, was pure science fiction. Thirteen years later, in 2000, patients began swallowing the first commercially built pill cameras. The practice, known as capsule endoscopy is now commonly used in medicine. Since 2000, 18 European businesses and research teams have formed a consortium with the Intelligent Microsystem Center to develop capsular robots for cancer detection and treatment. Fantasy, storytelling, imagination, visioning, creativity, science and commercialization has us deploy key new technological developments that will undoubtedly have an influence in the larger world of pill robots. 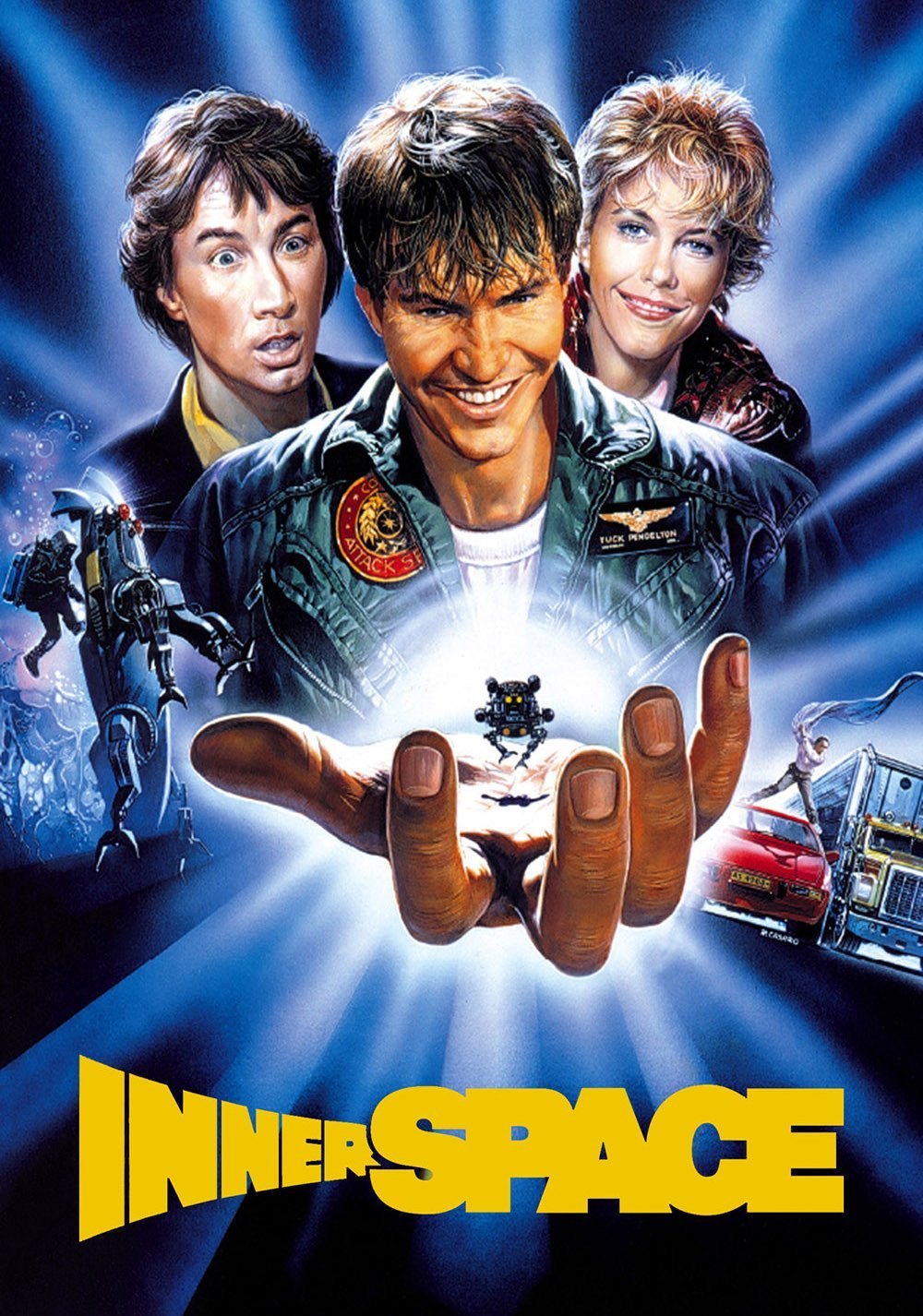 The 1987 movie, Innerspace, the story of a pill-size robot equivalent that could travel through a person’s gastrointestinal tract, was pure science fiction.

Researchers from Polytechnique Montréal, Université de Montréal and McGill University have developed new nanorobotic pills capable of navigating through the bloodstream to administer a drug with precision by specifically targeting the active cancerous cells of tumors. These robot pills are bred to respond to magnetic signals and can swarm to the oxygen-depleted tumor to deliver anti-ageing drugs. At this stage, the technology is incredibly limited. You cannot rely on a single robot to manipulate all the active cells in the body. Moreover, the leading method of manipulation is using external magnetic fields, as the batteries don’t work on such a large scale.

Similarly, in experiments involving a simulation of the human esophagus and stomach, researchers at MIT, the University of Sheffield, and the Tokyo Institute of Technology have demonstrated a “tiny origami robot that can unfold itself from a swallowed capsule and, steered by external magnetic fields, crawl across the stomach wall to remove a swallowed button battery or patch a wound.” 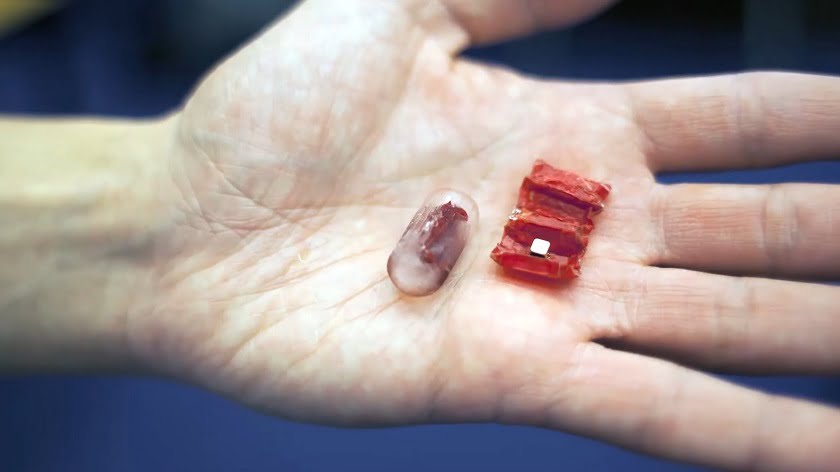 The researchers presented last month at the International Conference on Robotics and Automation, in a series of long sequence of papers on origami robots from the research group of Daniela Rus, the Andrew and Erna Viterbi Professor in MIT’s Department of Electrical Engineering and Computer Science. The origami robot pill is steered by applying magnetic fields generated outside the body to remotely control the movement of the capsules. Perhaps, in the future, pill robots could perform biopsies and even more complex therapeutic processes, such as surgical procedures, which would make them an even more powerful medical tool. Critical problems such as power supply, space constraints, and limited torque make ambitious therapeutic tasks impossible to achieve. Nanorobotic pills may eventually find wider use throughout the body for a variety of purposes.

It is well known that one cause of physical degeneration associated with aging involves telomeres, which are segments of DNA occurring at the ends of chromosomes in eukaryotic cells. Each time a cell divides, its telomeres get shorter, and once a cell runs out of telomeres, it can’t reproduce anymore and dies. An enzyme called telomerase is capable of reversing this process and is one of the reasons why cancer cells live so long. In November, researchers at Harvard Medical School announced in Nature that they had reversed age-related degeneration in mice, resulting in “new growth of the brain and testes, improved fertility, and the return of the lost cognitive function.” They administered telomerase to a group of mice suffering from age-related degeneration. The lab mice didn’t just get better; they got younger. By raising levels of telomerase in people, we might slow the aging process. 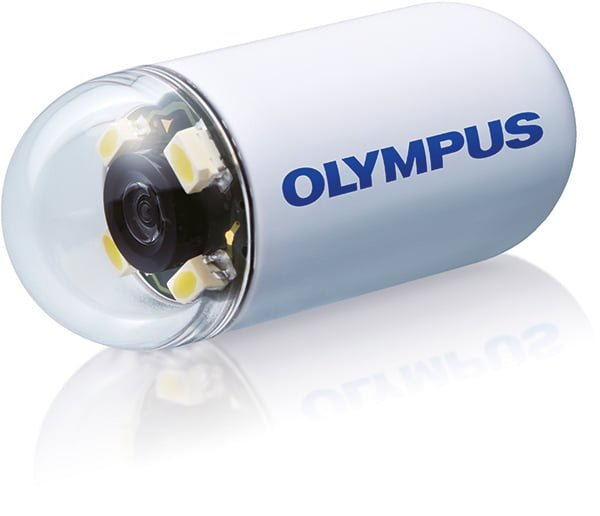 This therapy, using robot pills could have a dramatic impact on public health by reducing the burden of age-related health problems, such as stroke and heart disease, dementia, and organ failure, and prolong the quality of life for an increasingly aging population.

Repeating this in humans, however, is an impossible feat, because it makes the risk of cancer soar. Cancer occurs when mutated cells live longer than they should. If we figure out how to keep the anti-ageing of cancer cells without the dysfunctional mutations that come with them, we could basically never age and live forever.

Robotic Pills in the Larger World

Robot pills will allow us to transcend these limitations of our human bodies and brains. Human mortality will be in our hands. The non-biological portion of our intelligence will be much more powerful than unaided human intelligence.

There are significant gaps today between where pill robots are and the promise of the era of Singularity, when pill robots will be integrated into the journey to immortality and anti-aging, becoming as common as smartphones of today, and often acting as regenerative medicine. It’s all rosy and, of course, to a lot of people Singularity is a fantasy, wishful thinking, invented by the titans of tech. It’s hard to believe, though, since the human quest for immortality is ancient and littered with tales and myths. Around the 200 B.C., the first emperor of China, Qin Shi Huang, accidentally killed himself trying to achieve immortality; he poisoned himself by eating supposedly mortality-preventing mercury pills.

Take this question: Can a robot pill replicate the biochemical complexity of a living organism? If we do, the next-generation of tech-entrepreneurs will face an ever greater challenge: redesigning the planet to accommodate its massive, never-aging population of Humans.