Google has updated the Android Messages app to compete with the likes of iMessage, WhatsApp, and Facebook Messenger. From today and over the coming week, the search giant will begin rolling out the highly demanded feature in its messaging app which is “Messages for web”.

The new feature in Android Messages app will let users send and receive text messages on their computers. Messages for web will also facilitate attaching images to the text along with sending emoji and stickers.

Sanaz Ahari, Product Management Direct, Google mentioned in a blog post, “Over the past few years, we’ve been working on improving the messaging experience on Android—from working with carriers to upgrade their networks to RCS (Rich Communication Services) to building new features.”

Google will begin rolling out the highly demanded feature in its messaging app which is “Messages for web” from today.

How to Activate Messages for Web Service?

Other New Features on Android Messages

Along with launching the desktop browser for Android Messages, Google is aiming to provide a chat-like experience on Messages app, rather than just being a text message platform.

To begin with, Messages chat will allow Android users to communicate via GIFs. They can tap the + button on the left side of the compose message bar to search for relevant GIFs for the ongoing conversations. 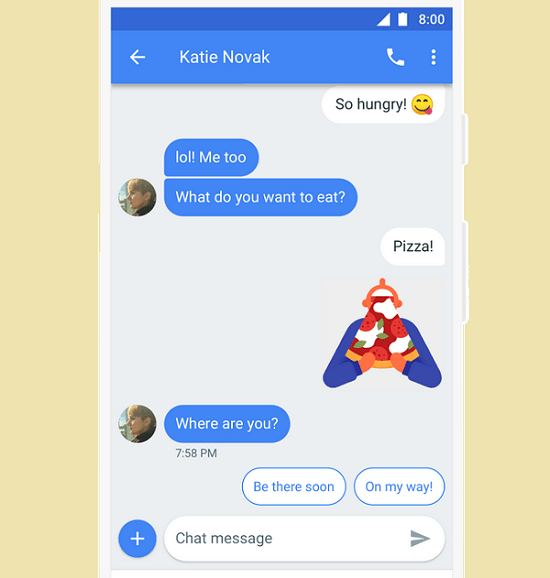 Google is aiming to provide a chat like experience on Messages app.

Secondly, the Gmail’s AI enabled feature Smart Reply comes to the Google’s messaging app also. Smart Reply saves on a time taken by suggesting quick text such as “Hello, How are you?” or an appropriate emoji. This is indeed helpful especially when someone is messaging on the go. For now, Smart Replies will be available only in English language and will support more languages in future.

Next, as visible in WhatsApp chat service, whenever someone sends a link in the chat, for instance about an article, the receiver can directly see an inline preview of the link.

The most important addition to Android Messages is the copy/paste feature. Now, when the Android mobile users will get a message with a one-time password or code from a secure site such as a bank, they can directly copy that password from the message with a tap.

Google is rolling out only Messages for web service from today. The other new features will land on Android Messages app later on.

It is interesting to note here the way tech companies are working on enhancing chat experience recently. It is quite evident that they do not tend to be dependent on the social media platforms over a time from now. This may reflect the changing consumer expectations from a conversation platform.