Gotham Knights Trailer: Darker Than Ever

Decoding all the mysteries that surround the new Gotham Knights game. Here we go!

Gotham Knights trailer, which almost broke the internet, of late, moves us to the edge of our seats and makes us feel butterflies in the stomach. The 1 minute 21 seconds-long trailer of the new Gotham Knights game, begins with an apocalyptic goosebump – Batman’s mask appears on the screen, followed by Bruce Wayne’s voiceover: “If you’re watching this, I’m dead.”

Let’s delve deeper into the Gotham Knights trailer, which promises 4K resolution and ultrahigh framerate to help us connect the dots.

The Usual Suspects Are Missing

It’s been a couple of days since publisher Warner Bros. Games and developer WB Games Montreal have dropped the trailer of Gotham Knights and Batman fans and gamers are yet to recover from the shell-shock.

It has been further learned that Batman’s arch-rival, the one who orchestrates the chaotic happenings in the city of Gotham, Joker is missing in action too! So, there’s no chance to enjoy the clash of the titans, the neck-to-neck epic battles fought between the two, something that kept gamers and Batman buffs glued to their screens for decades.

A Risk Worth Taking?

In this regard, we must admit that it’s indeed a bold step on the part of publisher Warner Bros. Games and developer WB Games Montreal to do away with the two faces of the franchise – Batman & Joker.

It’s often said that if you don’t risk anything, you risk even more. There’s no doubt about the fact that keeping both Batman and Joker out of the new Batman universe constructed in the Batman Gotham Knights, will force publisher Warner Bros. Games and developer WB Games Montreal to face a stern challenge. Especially, the way in the very beginning of the Gotham Knights PC trailer, we cross paths with the voice of Batman, revealing that the guardian angel of Gotham, is no longer alive, is undoubtedly a move that calls for a huge round of applause. 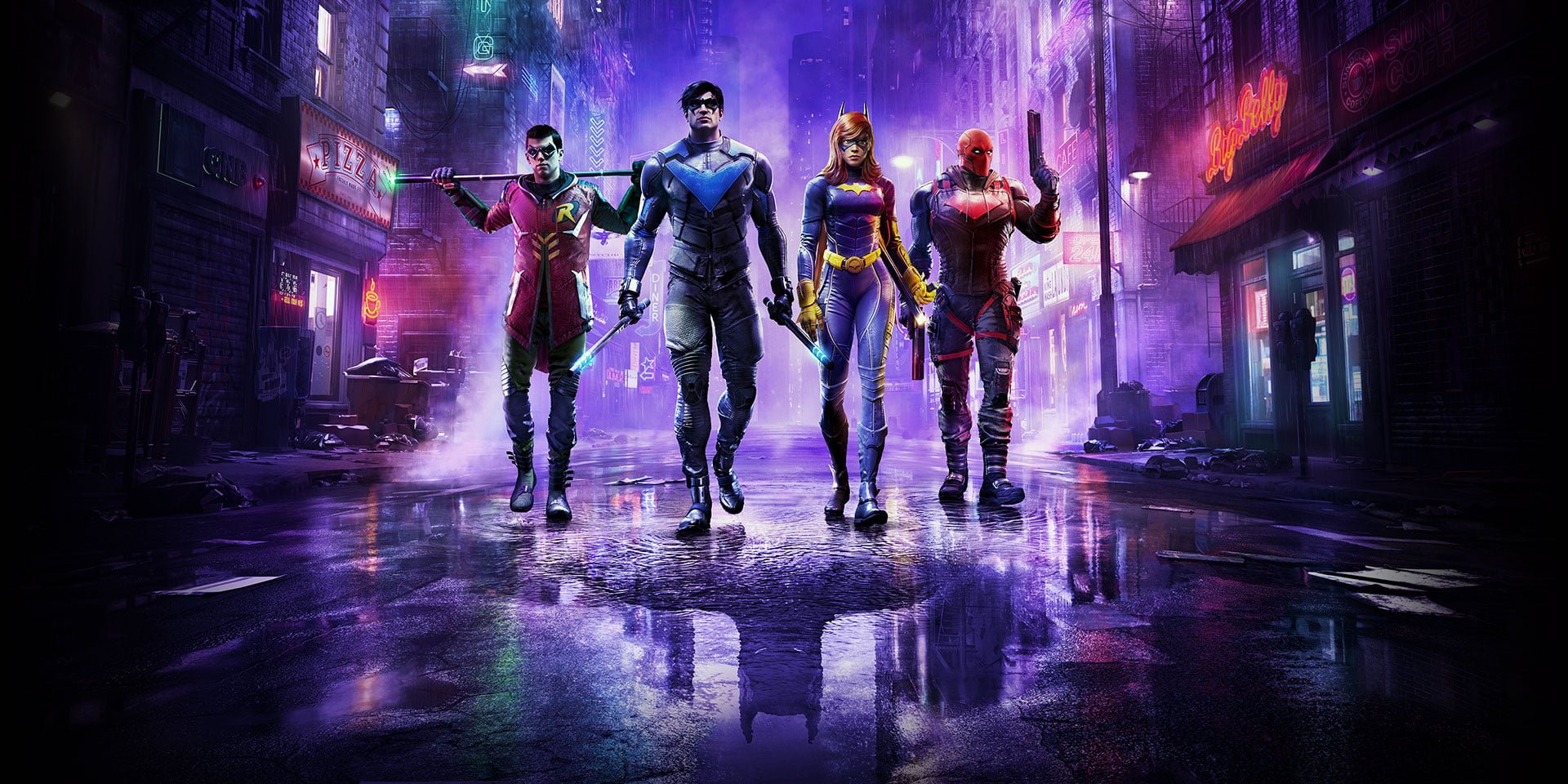 You will be able to don the hats of any of these four full-fledged playable characters, in the absence of Batman and Joker. [Image Credit: Gotham Knights]

Gotham Is In Safe Hands

In the Gotham Knights trailer itself, we find the Mayor of Gotham City, saying with conviction that “Gotham is in good hands.” With Batman out of sight, the fantastic four of Nightwing (or Dick Grayson), Batgirl (or Barbara Gordon), Red Hood (or Jason Todd) and Robin (or Tim Drake) will have their task cut out of protecting Gotham. However, we have to wait for the new Gotham Knights game to be unveiled fully, to figure out if Robin and Co. manages to pull it off. Just to remind you, in the trailer of Gotham Knights, Batman sounds optimistic enough, “I know you will keep Gotham safe.”

From Robin to Robin Hood?

The unusual manner in which Gotham Knights ‘PC Features’ trailer unfolds itself, hints at Batman’s sidekick Robin taking the center stage. For a long time, he’s been overshadowed by Batman for obvious reasons, being pushed to the margins. Come Gotham Knights Batman, he’s a full-fledged playable character. We have to wait till the Gotham Knights release date to see how many aces Robin has up his sleeve.

This Is A Film

The viral Gotham Knights trailer sheds light on the cinematic aspect of the new Gotham Knights game. From stunning graphics to new combat techniques and neo-noir music – we have a futuristic world in the Batman universe, which is darker, gloomier and murkier than ever.

With the Gotham Knights PC trailer signaling the opening up of a brave new world that’s different from Batman Arkham, expectations are sky-high. The way publisher Warner Bros. Games and developer WB Games Montreal try to deconstruct the well-known Batman universe, we can embrace ourselves for a blockbuster RPG named Gotham Knights Batman, where all hell will let loose.

An Offer You Can’t Refuse

The Gotham Knights release date is October 21, 2022, and it will be coming to Steam Deck also, apart from PC. If you are planning to pre-order the new Gotham Knights game, then you will be elated to know that you will be getting an exclusive 233 KUSTOM Batcycle Skin as an early-bird gift!