The Harvard Folding Robot is Wireless and Battery-less

The life in this age is gradually becoming one that resembles a sci-fi movie, every day we come across certain developments in the field of robotics. It is important to note that the mental image we have of a robot due to movies or other such visual medium is not exactly applicable in real life. Yes, there are certain robots which resemble your mental image but robotics is such a broad field of technology that it is impossible to generalize it. For every field, scientists are trying to come up with a different kind of robot. Just like the origami robot, the Harvard folding robot works on the same principle but without a battery.

This robot also draws inspiration from the Japanese form of art, origami. Origami is an art of knowing the right folds to create a 3D object from a normal piece of paper. This form of art has given birth to the concept of folding robots. This concept seems like an appealing one but it usually needs electric supply through a battery. But the Harvard folding robot is first of its kind to work without the need of any power supply. This way the wiring and battery will not limit the functions and abilities of the folding robot. 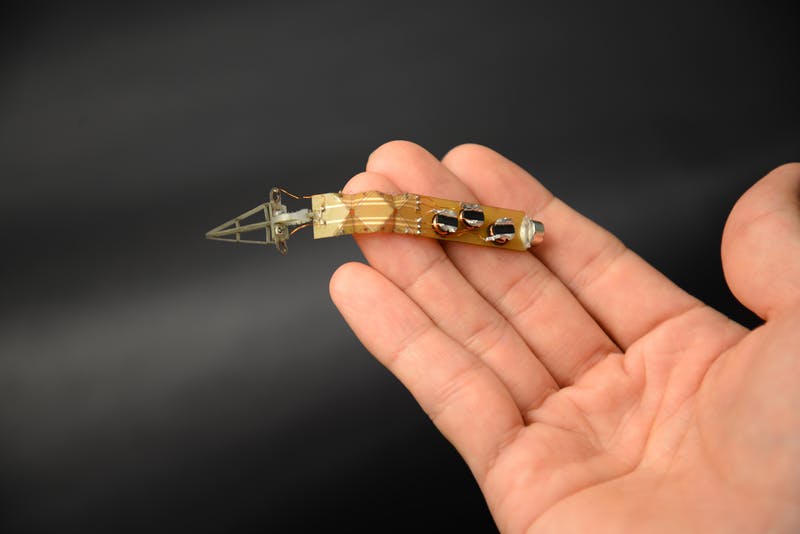 The Harvard folding robot is a thin, flat plastic tetrahedron.

Working of the Harvard folding robot

The Harvard folding robot is a thin, flat plastic tetrahedron which has three outside triangles to connect to a central triangle. This central triangle consists of a circuit board in the form of a hinge. This hinge is then further connected to metallic coils that are known as the shape-memory alloy (SMA). The purpose of this alloy is to contract itself like a muscle whenever a current passes through it. This is just one muscle. When a number of such alloys are put together, then the robot can properly function.

In the case of the Harvard folding robot, a number of these tiny creatures are joined together to form a robotic arm. This arm has the ability to bend itself and also has a grip to hold things. One can control the movement of this robotic arm by adjusting the external magnetic field’s frequency. This robot project is still in its research stage but on proper development, the scientists hope that it will be useful for medical purposes. Due to its small size, it will be helpful in biomedical applications as a small scale, wireless tool. It could also take the shape of a swallowable micro robot.