Thanks to the fancy wearable devices, keeping a check on one’s health has become a trend now. Even though it became popular due to a tech accessory, it is beneficial for the human race as it has made people more aware of their body. Keeping a check on your health conditions can help avoid any kind of illness or treat it on an early basis. This way one can reduce the harm caused to his body. Everyone wants to own a wearable device as a fashion statement which promotes the concept of a healthy self. But questions have been raised about the accuracy of such devices. In order to provide accurate results, a smart tattoo has been invented. 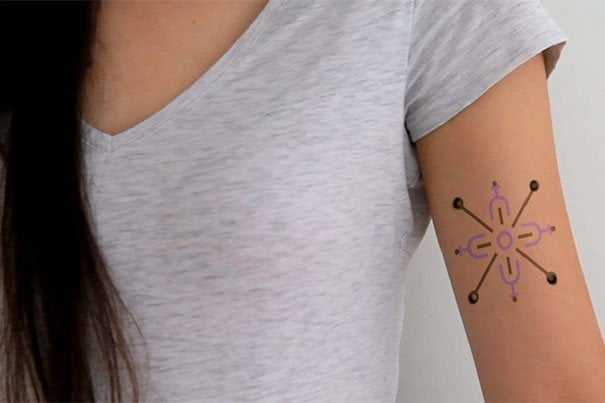 In order to provide accurate results, a smart tattoo has been invented.

Tattoos first became popular as a fashion statement. After this, people realized that they could use their tattoo as a medium to express themselves. Now with the advent of technology, a tattoo is no more a fashion statement but an object of utility. Wearable devices have been unable to give cent percent accurate results as they aren’t really connected to the person’s body. In case such a device loses internet connectivity, the results wary. This is why the monitoring of a smart tattoo is considered more reliable.

The smart tattoo that changes color

This smart tattoo has been innovated by science experts at the Harvard University and MIT researchers as a team. These scientists design this kind of tattoo in order to effectively monitor the health of an individual through the medium of the skin. The ink to be used in this tattoo will react to the chemical composition of the interstitial fluid. This fluid will give a clear idea about the state of the blood flowing in one’s body. According to the state of the blood, this ink will change color.


The green ink in the smart tattoo will change to a more intense shade to tell the individual that he is dehydrated. The other green ink in the tattoo will turn brown in order to warn diabetic patients that their glucose levels are going up. A major difference between this tattoo and the usual ones is that this won’t last forever. One can get this tattoo designed for as long as he wants. These tattoos are also capable of camouflaging themselves as they aren’t visible in certain kinds of light. Like all other health monitors, this one will also come with a compatible smartphone app. The app will keep a check on the numbers for you.