Google tuner borrows the same functionality as the Google Assistant through the command “tune my instrument.”

It’s hard to imagine what life was like before Google Search. The search engine is nothing less than having the world in the palm of your hand. And now, it is here to jazz things up with a handy built-in tuner. The new feature, titled ‘Google tuner’ will let you use the microphone on your phone or computer to tune a guitar.

Interestingly, the interface of Google tuner is similar to dozens of guitar tuning apps that are readily available on the app store. One can play a string on the guitar and Google tuner will detect the note you’re aiming for, and advice you to “tune up” or “tune down” as required. 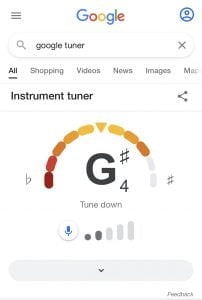 Google Tuner is perfect for users who do not fancy using a physical instrument tuner.

Google tuner borrows the same functionality as the Google Assistant through the command “tune my instrument.” Although, Google’s latest feature is a more convenient tool for users of all sorts of devices who want to instantly tweak their instruments via a browser only.

Here’s how you can get started with the feature:

Google tuner is pretty easy to use. Simply search for “Google tuner” in the search bar.

The feature works on most devices, except Galaxy Z Fold 3, according to Android Police. It reports that the device is unable to pick up sounds.

The latest Google feature is perfect for users who do not fancy using a physical instrument tuner. It suits the needs of users who wish to settle for an easy-to-use application without spending a few extra bucks.

There is only one downside to the tuner. It heavily relies on the quality of the mic in the device. There is no other way to easily plug in an electric guitar to avoid the background noise.