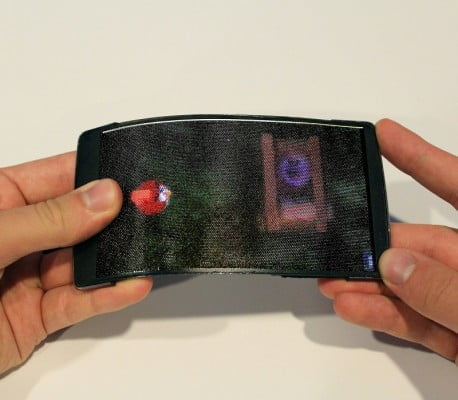 Researchers from Australia’s Queen’s University Human Media Lab have announced the development of a smartphone that includes a flexible body and holographic display.

Dubbed as HoloFlex, the world’s first holographic flexible smartphone can render 3D images with motion parallax and stereoscopy view to multiple users simultaneously without the need for special 3D glasses or head tracking.

The holographic light field display has a layer of very small lenses over it that transmits light in various directions, which makes the screen look like a floating hologram to anyone who is within viewing range.

Dr. Vertegaal forecasts that holographic smartphone is a breakthrough technology that could be used in a wide variety of applications, including the use of bend sensors for Z-Input to enable the creation and editing of 3D models. The display’s wide view angle will facilitate any number of users to simultaneously inspect the 3D object from several different angles.

The device can also be used for holographic gaming. So imagine playing a game such as Angry Birds, where players can bend the display outward to pull the elastic rubber band that launches the bird, thereby giving a more realistic feel to the action. When the bird slings across the screen, it does pop out from the screen in the third dimension, at least visually, thanks to the holographic projection.

The smartphone rely on the capabilities of HML’s previous development, ReFlex flexible smartphone that featured a bending gesture allowing users to bend the device as a way to shift objects along the z-axis of the display. Other specs include an Adreno 430 GPU supporting OpenGL 3.1. The phone runs Android 5.1 and is powered by a 1.5 GHz Qualcomm Snapdragon 810 processor and 2 GB of memory.

The researchers will be showcasing the HoloFlex at the upcoming ACM CHI human-computer interaction conference, scheduled to happen on Monday, May 9th in San Jose, California.